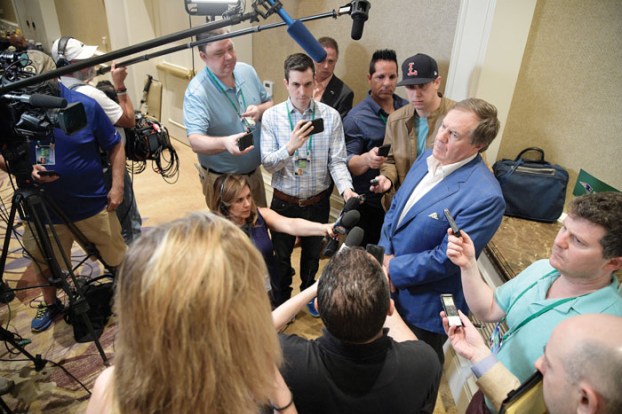 ORLANDO, Fla. (AP) — Maybe it’s too late for Jesse James and the Steelers or Zach Miller and the Bears.

No matter, the NFL has a simplified catch rule designed to eliminate confusion — and, the league hopes, controversy — about receptions.

—having control of the ball;

—getting two feet down or another body part;

—making a football move, such as taking a third step or extending the ball.

“We wanted to simplify and provide clarity,” Pittsburgh coach and longtime competition committee member Mike Tomlin said. “It was time to do so after we got caught up in language that didn’t do that. The language was obscure and confusing.”

The committee cited overturned receptions by tight ends James and Miller last season among the dozens of plays they reviewed “dozens of times,” according to committee chairman Rick McKay, president of the Atlanta Falcons.

The James call was particularly impactful because the Steelers wound up losing to New England in a December game that determined home-field advantage for the playoffs. The Patriots got it and wound up in the Super Bowl. Pittsburgh lost its first postseason game to Jacksonville.

Just as infamous were negated catches by Dez Bryant of the Cowboys in a 2015 playoff game at Green Bay, and Calvin Johnson of the Lions in 2010 against the Bears.

“I think the third step recommendation was excellent,” Packers coach Mike McCarthy said. “It cleans up a majority of the (catches) that were in question. The old rule was so technical. We’re better off today than in the past.”

“First of all, simplicity is the key. I think this is a fan-driven concept here because a lot of people have no idea why was this thing called that way and why was the next one not called that way. … I think we’ve cleaned up a lot of that, and that will get the fans more engrossed in the game. It’s going to be much easier for them to understand what is and what isn’t.”

Late Tuesday, the owners rewrote the rule on using the helmet, making it a 15-yard penalty for any player to lower his head to initiate any hit with the helmet.

McKay called it “a significant change,” noting that it was a “technique too dangerous for the player doing it and the player being hit.”

McKay said the tackle made by the Steelers’ Ryan Shazier last season that resulted in the linebacker suffering a spinal injury — Shazier underwent spinal stabilization surgery two days later —  was not the impetus for the change. But it was an example of what needs to be eliminated from the game.

“This one technique, we saw so many hits when a player lowered his head and delivered a hit and either hurt himself or the player he was hitting,” McKay said. “It was time for a change of this magnitude.”

While the offender could be disqualified, owners did not call for an automatic ejection on such a play — at least not yet. In college football, when a player is penalized for targeting and a replay review affirms it, he is ejected.

Also approved Tuesday was making permanent spotting the ball at the 25-yard line after a touchback on a kickoff; allowing players on injured reserve to be traded; and authorizing a designated member of the officiating department to instruct on-field game officials to eject a player for a flagrant non-football act when a foul for that act is called on the field.

Withdrawn by the Jets was a proposal to limit defensive pass interference to 15 yards, the penalty in college, except for egregious incidents. The competition committee was not in favor of such a change, but McKay and football operations chief Troy Vincent said the idea has “some momentum.” It is likely to come up again in future meetings.

Tabled was a proposal to allow an assistant coach whose team is still playing in the postseason to sign a contract to become head coach elsewhere. That’s been dubbed the “Josh McDaniels Rule” after the Patriots offensive coordinator agreed to become the Colts coach in January, then reneged and returned to New England soon after the Super Bowl.

That suggestion also is expected to come up at future meetings, beginning in May at the Atlanta owners get-together.

Also tabled was whether to allow video on sideline Surface tablets that teams use now to view photos. McKay said the voters weren’t there to pass it.

On-field officials supported having a member of the staff in New York calling for an ejection in certain blatant circumstances that involve non-football acts such as fighting. They cited the difficulty of determining the culprits in a fight or other such situations.