My turn: With gun debate, churches have chance to spark revival, reach out to young 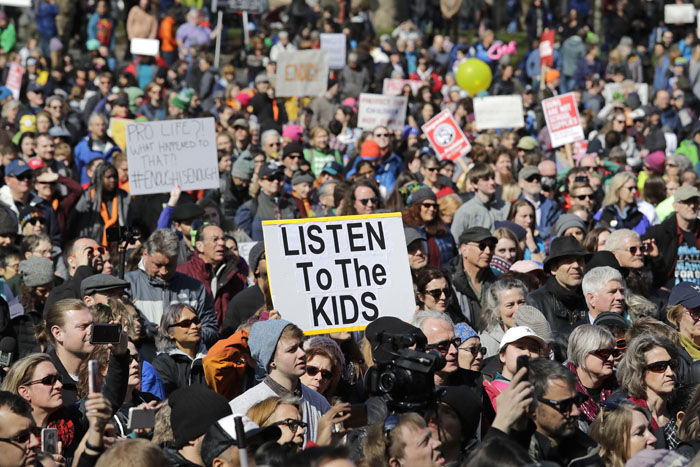 It was hard to avoid the news of young people rallying all over the country and globe. Their desire is to see our schools and communities be safe, to draw attention to the politicians who are accepting large donations from the NRA, and to ask the leaders of our nation to address gun safety laws.

I listened to the rally that was held in Washington and found myself impressed by these young people who articulated their points so well.

I know that anything to do with gun control laws is a highly controversial topic. Let me be clear that I highly support the Second Amendment right to own guns.

My parents are probably unaware that I enjoyed shooting guns while in the Boy Scouts. I shot a black powder rifle and a low-caliber rifle. It was fun to shoot at the targets, but we were in a highly structured, safety-conscious environment. More kids should learn both the dangers and the safety practices we were exposed to in the Boy Scouts.

When it comes to gun control laws, it seems we are highly polarized. Some want to restrict gun ownership while others think more guns are the answer. Where is the compromise or a more central view?

Most gun enthusiasts that I know feel it would be great for new gun owners to learn the basics of gun safety and how to handle firearms properly. Many gun owners support background checks, while others don’t. The waiting period can be a more sticky issue for gun owners.

One of the proposals promoted at the youth rallies is to raise the minimum age for gun ownership to 21. I haven’t asked any of my gun-owning friends what they think about that, but I imagine I will hear from some of them after I write this column. The high school students who were rallying feel it could help to keep guns out of the hands of students who are still enrolled in high school.

The most controversial thing that the students are seeking is a ban on assault rifles. These are the guns that most of the mass shooters have employed to carry out their carnage. The problem, I am afraid, is really not the existence of the assault rifles or even the ease of their availability but the existence of evil in our world. The root cause of gun violence in our society is not heaven but hell.

We live in a lost and dying world that desperately needs the Lord. Many people do not want to talk about the devil or demons, but these horrific acts reveal their existence. God has nothing to do with the senseless shootings that fill our headlines. He does, however, send his children and angels to comfort those who are suffering.

I find hope and encouragement in watching the students rise up and speak out. I felt a similar way watching the election process at the state DECA conference. Young people are growing up and taking on leadership roles. My hope is stirred because these might be the embers of a new revival that can burst on the scene at any moment.

The next generation of students has been stirred to action because of gun violence. Imagine if some older and wiser Christian leaders would draw close to these young people and help them discover the power they need to bring about the change they so deeply desire.

The only power that I know that is unstoppable is the power of prayer.

If Christians would open their eyes and see the opportunity to guide some of these leaders to faith in Christ, we could see a revival of biblical proportions. I believe that we older Christians need to take the torch of our faith and pass it on to the next generation.

There are some young leaders emerging who, if they could be taught that the real power is found when we get on our knees, then I believe that some of these movers and shakers would explode and bring about a change in our society that none of us could imagine.

I believe this is a golden opportunity for the church. The fire is already kindled; it just needs the breath of the Holy Spirit to ignite a revival.

I want to encourage you to join me in prayer for what I see as the beginning of a great revival. Ask God if there is someone in your sphere of influence that you could speak to, encourage and point to the Lord Jesus. I believe if the Holy Spirit can be injected into this movement, the revival I have been praying for will emerge.