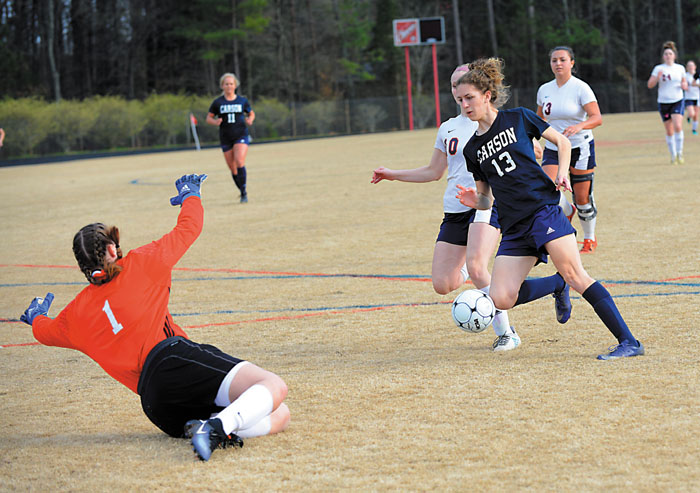 GRANITE QUARRY — It may be time to recalibrate expectations for the Carson girls’ soccer team.

The Cougars have spent the season’s first month raising the bar for themselves in what promises to be a tight North Piedmont Conference race.

“The first couple games we were trying to figure out how to work together,” coach Lauren West said Wednesday, just moments after Carson (6-2, 2-0) thumped host East Rowan, 5-0, for its sixth consecutive victory. “Now we’ve learned to trust each other. And when you trust each other, this is what you see.”

It was an illuminating and dominant display. Carson outshot the Mustangs (3-5, 0-2) by a 23-1 margin, thanks to some lockdown midfield play by Hannah Smith, Emily Sloop, Lani Isley and Kate Carter. Smith and sophomore teammate Gracie Thomason netted two goals apiece and senior forward Sarah Musselwhite (1 goal, 1 assist) closed the scoring with 5:36 remaining.

“It was another good conference win,” Smith said. “Everyone connected well. We seem to be building as the season goes on.”

That might spell trouble for the rest of the conference. West believes the Cougars have enough front-middle-and-back strength to wrestle with North Iredell and South Iredell for the NPC crown.

“I don’t know the NPC,” West said. “And I don’t know if we’re favored, but we’ll be in it. Every year, we pick up another piece. When you get team chemistry, when you get people comfortable with their positions, everything seems to click. That what’s going on here.”

Carson started clicking in the early stages. It opened the scoring nine minutes into the match when Isley — a heavy-footed freshman — sent a corner kick to the goal mouth, where Smith converted an airborne layup.

“Lani has great corner kicks,” Smith said. “So I was ready and just trying to get my head on the ball. But that one kind of bounced and I popped it into the back of the net.”

East coach Bethany Davis immediately sensed a change in her team’s demeanor. “Our will to keep pushing seemed to drop,” she said. “When we get scored on, we often switch into a defensive mentality — to not get scored on anymore. Our offense sort of died right there.”

The Mustangs didn’t attempt a shot-on-goal in the first half — and fell behind 2-0 when Thomason slammed a close-range past East goalkeeper Lauren Weisensel.

“We’re learning to be where we need to be,” said Isley. “A lot of us think alike. It was important to get those first two goals because it settled us down. Plus, it’s really hard to come back from two goals down.”

It also ignited the Cougars’ pilot light. Carson broke the match open with two quick scores early in the second half. First, Smith made it 3-0 when she teamed with Musselwhite and Thomason on a tic-tac-toe sequence at the doorstep just 1:52 into the second period. Two minutes later, Thomason settled a 35-yard centering pass from Isley (2 assists) and redirected a five-foot shot past Weisensel.

“They just played around us,” said Davis. “They connected passes and we didn’t. And their midfield presence was very strong. All we could do was kick it away. When you’re facing a team that controls the middle, it’s hard to do anything else.”

East’s only shot came with about 13 minutes remaining and was easily handled by winning keeper Montana Gurganoius. “We shut them down in the middle,” said Smith. “We played with a lot of good energy, trying to get all these pieces to work together.”

It’s all part of a master plan that West and assistant coach Ellen Howard and carefully executing.

NOTES: Thomason finished with two goals and two assists after feeding the wide-open Musselwhite on Carson’s final goal. … East’s best player was Weisensel, who made 12 saves. … Carson will spend the Easter break tied for first place in the NPC. It returns to action at home against Statesville on April 10. East has lost four of its last five matches and remains idle until it hosts South Iredell on April 9.