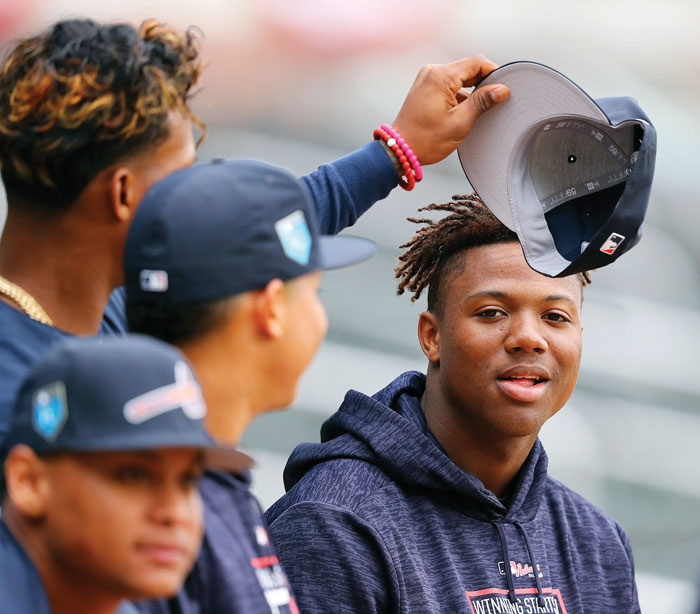 Atlanta Braves outfielder Cristian Pache, left, clowns around with Ronald Acuna Jr., right, grabbing his hat and leaving it propped up on his head as they prepare to play in the "Future All-Stars" exhibition game against the Atlanta Braves on Tuesday, March 27, 2018, in Atlanta. (Curtis Compton/Atlanta Journal-Constitution via AP)

ATLANTA (AP) — Ronald Acuna’s debut at SunTrust Park was only a tease.

Acuna’s return to Atlanta on a full-time basis, and in a game that counts, may be less than a month away.

The Braves closed their exhibition schedule with a 7-4 win over a Future Stars team of minor leaguers, including top prospect Acuna, who had a single in three at-bats.

Atlanta opens its season on Thursday night when Julio Teheran starts against the Philadelphia Phillies. Acuna will begin at Triple-A Gwinnett, perhaps for only a few weeks.

Acuna wanted to open the season in Atlanta but said understands more went into the decision than his .432 spring batting average.

“It’s just not the right moment right now,” Acuna said through a translator before the game. “That’s just part of the business. Baseball is a business and I understand that. There are a lot of things that go into the decisions.”

Having Acuna spend a few weeks in the minors will give the Braves an extra full season of contractual control down the road. He could be promoted by mid-April.

Cristian Pache drove in three runs for the Future Stars with two homers, each landing in the visitors’ bullpen, off Braves left-hander Sean Newcomb.

Bobby Cox, 76, clearly relished the opportunity to return to the dugout as the Future Stars’ manager. He even wore spikes, as was his custom during his long career as the manager in Atlanta and Toronto.

Cox, now a senior adviser with the Braves, was with the team throughout spring training. That gave him ample time to watch Acuna, who was selected Baseball America’s top prospect as well as MVP of the Arizona Fall League.

Acuna hit second in Cox’s lineup, but the Hall of Fame manager said: “He can hit anywhere. It doesn’t matter where he hits in the lineup. He’s a dynamic-type guy, five-tool guy.”

Following the team’s stance, Cox said Acuna will benefit from “a little bit more seasoning” in the minors.

“Get him off to a good start and hopefully he gets him up here real soon,” Cox said.

Before the game, Acuna said he was so excited to play at SunTrust Park “there are really no words to describe it.”

After striking out in his first at-bat, Acuna lined a single to left field off Newcomb in the third inning but was picked off as he tried to steal second.

Cox said Acuna reminds him “a lot” of a young Andruw Jones.

“He makes contact,” Cox said. “He’s got a good eye at the plate. He’s got tremendous power to right-center as well as left. He can hit the ball out dead center, right-center, left-center.”

“He helped me right away when I got to spring training and since I’ve known him, really,” Acuna said. “He’s helped me focus on the little things, which I think is the difference-maker in how you get to the big leagues. I’m really thankful for all the advice he’s given me.”

“I’m not that old!” the 27-year-old outfielder said with a laugh.