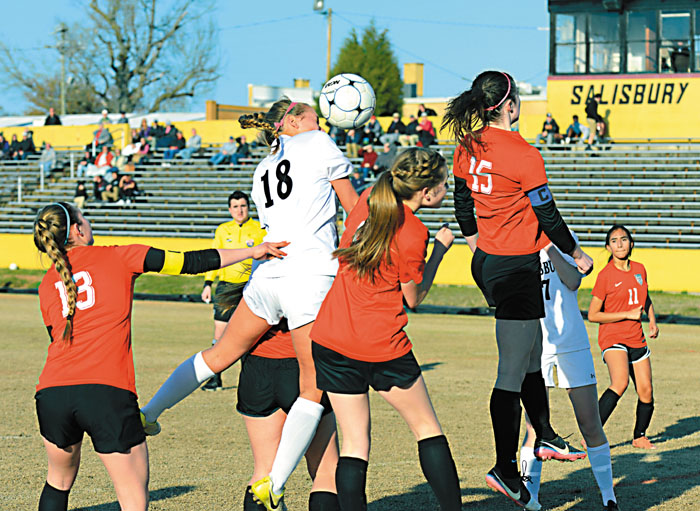 Salisbury's Piper Muire 18 heads the ball into the goal to score. photo by Wayne Hinshaw, for the Salisbury Post

Honeycutt scored the tone-setting goal, the clinching goal and another one in between, a hat trick that raised her season total to 16 goals.

“There are games where goals are going to come easily, but in a game like this where goals are hard, every goal is like three goals,” Salisbury coach Matt Parrish said. “To score three goals in a game like this, two of them fantastic goals that not many keepers are going to stop, that says all you need to know about Julia Honeycutt. She’s been county player of the year twice and she showed why. She scores important goals. She took this game in her hands.”

Salisbury (10-0, 8-0 CCC) is a mix of savvy and youth, with a strong senior class keyed by Charlotte 49ers signee Honeycutt and keeper Emily Mann mingling with a powerful freshman class that includes future stars Piper Muire and Lillie Rusher.

“I had a feeling we were going to be good, but we lost some very strong players and you never know how quickly freshmen will adjust to the varsity level,” Honeycutt said. “But our freshmen don’t play like freshmen. They already play like they’re experienced. Piper Muire is so good defensively in the midfield that it’s allowed me to trust our defense more and become a bigger part of the attack. I can be aggressive,  I can keep pushing up, looking for chances to help us score.”

South Rowan (8-3, 7-2 CCC) is good and had outscored opponents coming into the game, 42-12. But South gets two-thirds of its goals from one player —lightning-fast sophomore Madison Henry. Focusing the defense on Henry has become a standard gameplan for South’s opponents.

Muire made a concentrated effort not to let Henry break out of the midfield, and on the rare occasions when she did go sprinting into daylight, multiple Salisbury defenders were ready for her, forcing her toward the sideline. Henry still scored the South goal, her 28th of the season, with an amazing individual effort.

The first goal came quickly. Just four minutes in. It was Honeycutt with a brutal blast, a straight-on missile from long range that stunned everyone except South keeper Michelle Rivera. Rivera somehow got a piece of it, but the ball still hammered the back of the net.

“I had a sense that we really needed an early goal tonight for our confidence,” Honeycutt said. “I had planned to shoot from more distance than usual. If a shot was there, I was going to go for it. The keeper got a hand on that first goal, but that shot had a lot of pace.”

Ten minutes later, the Hornets made it 2-0. The freshmen executed on a set piece. Rusher’s precise corner kick found the head of Muire in front of the goal, and she directed the ball past Rivera.

“That’s five or six times this year they’ve made that same play,” Parrish said. “Muire is already one of the better players in our league. Just like you can’t teach the kind of speed Henry has, you can’t teach instincts like Muire has. She can read the play, and she’s athletic enough to get to the spot to make that play. She combines know-how with some thunder.”

After the scoreboard clock ticked past the halfway mark of the first half at Ludwig Stadium, Honeycutt struck again, bobbing and weaving through back-pedaling Raiders for 40 yards like a powerful running back who smells the goal line. Then it was just Honeycutt and Rivera, and Honeycutt’s booming finish made it 3-0 Hornets.

“I was looking for the cross, looking for a teammate, but I heard our coaches yelling, “You! You! You!,” Honeycutt said. “I could feel all the defenders were on my back, and I let it go.”

Down 3-0 at halftime, South coach Kyle Neal rallied the troops. Salisbury had been in command for about 35 minutes in the first half.

“Salisbury did a good job of limiting our scoring chances in the first half, and we just did not match their physicality,” Neal said. “Julia just ran over us a little bit.”

South came out much stronger in the second half and tried to fight its way back into the match.

“We did play more aggressive in the second half and if we’d played like that in the first half, maybe things go differently,” Neal said. “But a big part of this game is being ready to play. We needed to be more ready in the first half.”

No one scored in the early stages of the second half, although both teams had plenty of chances.

“We had two perfect crosses where all we had to do was run onto the ball, but we left those goals out there,” Parrish said. “Both teams are going to look at the film and see that they missed opportunities.”

Finally, Henry did her thing. She dribbled the ball a long, long way on left-side dash, until she was finally hemmed in near the Salisbury sideline by two defenders. She juked her way into space, and with very little angle to work with, slammed in South’s lone goal.

“Bump and run, then bump and run again, and she must have gone 70 yards with it,” Parrish said of Henry’s goal. “If you miss that first tackle on her, she can go.”

“I knew I didn’t play my best in the first half, and Salisbury’s girls in the back are good,” Henry said. “I knew if I was going to do anything tonight, I was going to have to fight for it, and at halftime, I made up my mind to fight. That score changed the momentum for us.”

South was the aggressor for most of the next 10 minutes and nearly made it 3-2 when another dash by Henry narrowly missed.

“They were taking it to us, moving the ball on us, and we were doing a lot of chasing,” Parrish said. “People are going to score on us, so we have to respond better. We were up 3-1, but we were back on our heels for some long minutes.”

With seven minutes left, Honeycutt had seen enough. She ripped home her third goal to make it 4-1— again from distance — and that settled it.

“I didn’t want us to just be sitting back and trying to defend them the rest of the game,” Honeycutt said. “I wanted to stay aggressive.”

She stayed feisty to the end, and Salisbury, a defending champion that is playing this season in an expanded, much deeper Central Carolina Conference, stayed unblemished.

“I was just hoping we could stay in the upper echelon of this giant, new conference,” Parrish said. “We survived Central Davidson, we survived North Davidson, and now we survived South. Still to come is the biggest challenge of all.”

That challenge is undefeated West Davidson, the program that won the CCC in 2014, 2015 and 2016 before being dethroned by the Hornets last season. Salisbury hosts the Green Dragons on April 9.