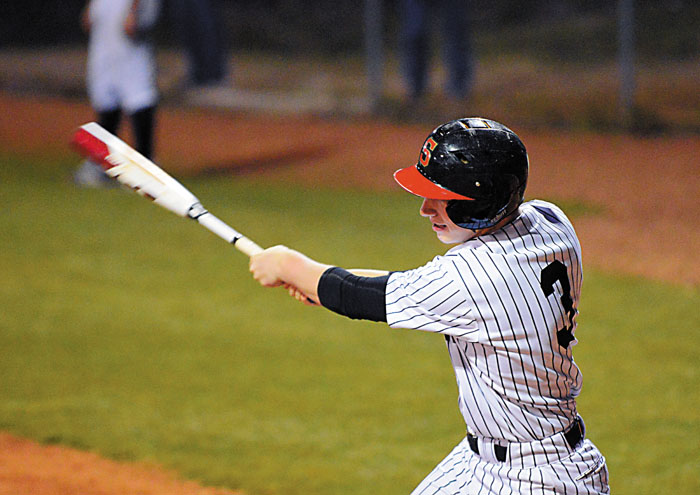 Wayne Hinshaw file photos/for the Salisbury Post Salisbury’s Bo Rusher (above) and Jack Fisher (below), shown during a recent game against Central Davidson, were key in the Hornets’ big 4-1 win over Ledford on Tuesday evening. Fisher and Rusher pitched Salisbury past the previously unbeaten Panthers.

WALLBURG — Salisbury’s baseball team won on Tuesday against the top-ranked team in 2A.

“We took advantage of some mistakes, but to beat a team like that, that’s what you’ve gotta do,” Salisbury coach Mike Herndon said.  “Ledford — those guys are good. They’re the real deal, but we found a way.”

Ledford (11-1, 10-1 CCC) had Chris Villaman, one of the state’s best juniors, on the mound. The left-hander struck out 15 Hornets in six innings of work and carried a no-hitter into the fifth inning.

“I haven’t seen a high school left-hander like that in a while, and I’m sure most of our guys have never seen a lefty like that,” Herndon said. “But I have to give our guy on the mound credit. Jack Fisher wasn’t getting it up there as quick as Villaman, but he kept us in the game. Jack competed. He pitched his tail off for a long time.”

Salisbury (10-2, 9-2 CCC) had been helpless against Villaman the first four innings, but it bunched all three of its hits in the fifth.

The decisive top of the fifth started with one more Villaman strikeout. Then Blaine Shellhorn was another strikeout victim, but he reached first base safely when the ball got past the catcher.  Zach Robinette walked, and the Hornets had two on.

Villaman got another strikeout for the second out, but Shellhorn came around to score the game’s first run after a wild pitch and passed ball. Freshman Vance Honeycutt got behind in the count 0-and-2 before singling through the left side to score Robinette for a 2-0 lead. Joe Steinman singled on an 0-and-2 pitch to extend the inning. Honeycutt scored on a passed ball to make it 3-0, and Griffin Myers produced another clutch hit to make it 4-0.

“We had a lot of bad at-bats before that inning, but guys really battled in the fifth with two strikes, and we came up with three two-out hits,” Herndon said.

Fisher walked the leadoff man in the bottom of the fifth. He got one out in the inning before Herndon called on Bo Rusher. Fisher’s pitch-count was at 101, and Herndon has a lot of faith in Rusher, a slugging catcher who also has become the Hornets’ closer. Ledford managed to get a run in that inning on a groundout, but Rusher maintained a 4-1 lead.

Then Rusher got the Panthers out in the sixth and seventh for his third save. Rusher got eight outs without allowing a hit and preserved the victory for Fisher (5-0).

“This was a big one for our guys,” Herndon said. “It reminded me of some of those pitchers’ duels we uesd to have  in the Central Piedmont Conference when I was coaching Davie County. Our guys really hung in there, and I couldn’t be prouder of them. They’re starting to realize they can compete with the best.”

Salisbury hosts Ledford on Thursday. Ledford is expected to send senior Logan Whitaker to the mound. A 6-foot-5 right-hander, Whitaker is also headed to N.C. State.

Steinman is the probable pitcher for the Hornets.

“Ledford is gonna be mad,” Herndon said. “But I know our guys will play hard.”

Myers was expected to be Salisbury’s ace entering the season, but he hasn’t pitched in nearly a month. He’s been dealing with arm soreness, but he’s been throwing bullpens and is almost back to full strength.  Myers is almost certain to pitch in the Easter tournament in Kannapolis that starts on Friday.

“The guy who was our best pitcher last year hasn’t been pitching, so we do like the position we are in right now,” Herndon said. “We’ve just got to keep playing. We’re back in the race now, and we control our destiny.”

North Davidson, undefeated and ranked No. 2 in the state is also in the CCC. Ledford and Salisbury both have two games to play against the Black Knights, a power in 4A for many years.