Guest column: At D.C. march, the kids had plenty to say. Can we at least listen? 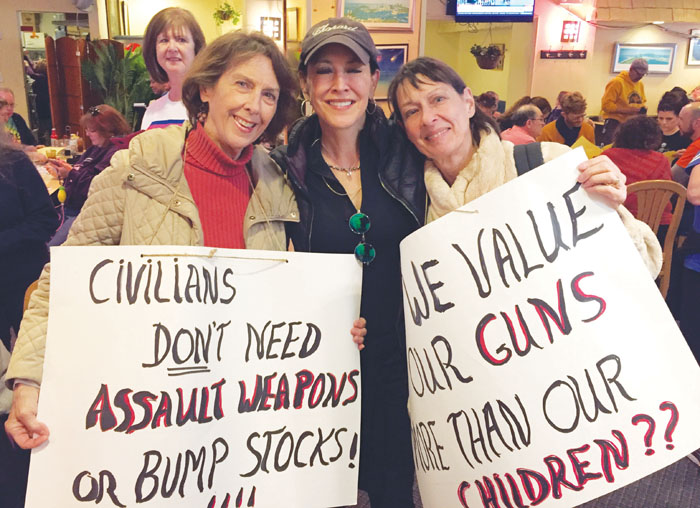 For three sisters spread across the country who are rarely in the same place at the same time, it was a memorable and heartfelt reunion. I joined my older sister, Libby, from Lynchburg, Virginia, who is a late-blooming activist, and my younger sister, Stephanie, a nationally syndicated progressive radio talk-show host from Los Angeles, this past Saturday in Washington, D.C., for the March for Our Lives.

Coming from a politically conservative family, we three have somehow departed independently from those roots over the years and find we share a common anxiety over at least one issue: the growing gun violence in America.

The experience was heart-wrenching and hopeful at the same time. Regardless of one’s stance on gun control, only the most callous among us would not be awed by the maturity, wisdom, courage and articulateness of students as young as 11, no older than 18, crying for change. Adults helped facilitate the three-hour orchestration of speeches, songs and videos displayed on several Jumbotrons (they were too young to obtain a march permit, for example), but the content was entirely theirs.

By design, they wanted no adults on stage, only the voices of the young who have witnessed too much carnage and borne too much grief.

Emma Gonzalez left 800,000 of us in stunned silence for much of her six minutes and 20 seconds, rendering stark the period of time it took to kill 17 of her fellow students and teachers. Another left us pondering his question: If we arm our teachers, who’s next? Our ministers and rabbis, movie ticketers, concert gate-keepers, nightclub bouncers? How about our Walmart greeters? This sounded like madness, like we had lost our collective mind.

I was impressed by these students emphasizing that law-abiding citizens have every right to keep, and keep getting, their guns, and that any suggestion to the contrary is just plain false, misleading and destructive. Never once did they mention or malign a politician, party or lobbying group by name, saying this should be a strictly bipartisan issue.

Sure, they said, our mental health system and law enforcement policies need addressing, and people kill by other means, but it’s tough to avoid the simple fact that absent our easy access to guns, those who wish to do others harm would have to resort to using their fists, a knife or almost anything that lacks the capacity to kill instantly, often multiple victims in seconds.

thought, How could anyone not see the reasonableness of their demands?” How could even the most fervent gun enthusiasts oppose efforts to keep guns out of the wrong hands? Like universal background checks? A waiting period, shorter than most of us wait for our dry cleaning, to buy a lethal weapon? A ban on bump stocks that make semi-automatic rifles even more deadly? A limit on high-capacity magazines?

No law will ever eliminate gun violence, they said, but can’t we do something, anything, to at least decrease its likelihood?

Since returning from the march, I have read so many horrible, hateful charges hurled at these well-meaning students — that they’re pawns for left-wing Hollywood moguls or conspirators out to repeal the Second Amendment. I can’t even fathom where this ugliness comes from.

Can we not at least recognize and appreciate the heart-felt emotions of hurting children? Can we not at least bring ourselves to listen and be moved toward some civil discussion about possible solutions to one of the most pressing issues of our time? I hope so. This is the hope I have brought home.

Letter: Stand up to Trump’s betrayal