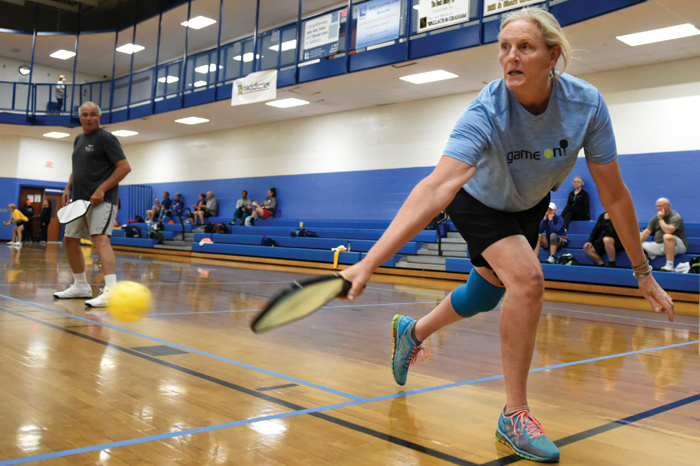 “We used to just have one or two courts. And now we can pretty much put out three in this court and three also in our smaller gym,” Byrd said. “So it has picked up a lot.”

Hurley Y Executive Director Richard Reinholz is among the most recent converts to the sport. He said he got his first chance to play “real” pickleball last year.

“I’d hit it around prior to that … every now and again with some folks that play recreationally. But last year, this tournament was the first where I started really playing,” Reinholz said.

Reinholz said that, although last year’s pickleball tournament was played at the Y, it was not a “Y” event.

But this year, it is — and Reinholz said he hopes it stays that way “from here on out.”

“It’s a sport that, in my opinion, you can play recreationally or competitively at all ages. So if you’re young, as the 12-year-old participant we have, or the person that’s 79, you can still be very competitive,” Reinholz said.

Reinholz said the tournament, which lasted from Friday to Sunday, was a fundraiser for the Y’s Open Door program. The program offers financial assistance to people who could not otherwise afford Y memberships.

“We don’t turn anybody away due to the inability to afford our programs,” Reinholz said.

The entry fee for the tournament was between $40 and $45 and Reinholz said 161 people competed.

“In the state, we have people from Asheville, from Leland, which is close to Wilmington,” Reinholz said. “Jon (Post) mentioned we have someone from Washington state.”

In all, said tournament organizer Jon Post, the tournament drew 161 people ages 12 to 79 from six states and 75 cities.

Post said about 120 of those 161 people lived outside of Rowan County.

“So we’re going to sell some hotel rooms for that,” Post said. “And a lot of meals are being eaten, even by people who live here.”

Reinholz said “the majority of the work” of planning the tournament was “really on Jon (Post)’s shoulders.” Post said he has been planning tournaments for racquet sports since he was 18.

Post, who won a national Senior Games title in pickleball last June, has been playing pickleball for two-and-a-half years. But he said, before that, he played tennis for 55 years.

“Tennis players have a big advantage,” Post said. “Because if you get somebody that hasn’t played tennis, even if they played ping pong, racquetball, badminton — they all help — but tennis really gives you a feel for the ball and tight shots and everything.”

Post said he had to quit tennis because of joint problems. But he said pickleball still allows him to be competitive.

“It’s a smaller court, but the dynamics are very similar. The racquets are shorter, so the court is smaller. And so you don’t have to cover as much, but it’s still an athletic game.”

Reinholz said pickleball has the ability to “level the playing field,” which makes it a “cool sport for all ages.”

“It’s really a sport that is very social as well. Everybody is always very friendly. There’s rarely any disagreements. There’s always a lot of social components pre- and post-play that you see at tournaments,” Reinholz said. “And I just feel it’s a great community sport. It brings the community together.”

According to the U.S.A. Pickleball Association website, there are nearly 4,000 places to play pickleball around the country.