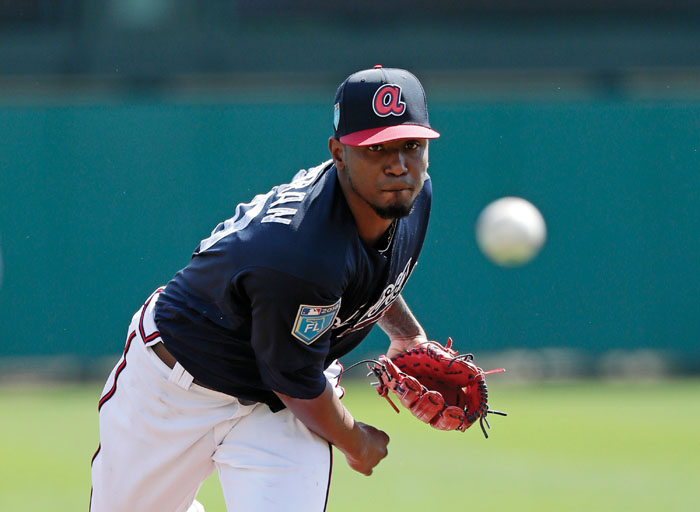 ATLANTA (AP) — The focus of the Atlanta Braves’ rebuilding process has been pitching as the team stockpiled prospects through the draft and trades.

Those young pitchers remain vital to the team’s hopes of returning to the postseason, but 20-year-old outfielder Ronald Acuna showed this spring he’s the team’s future star and a key to hopes for improvement in 2018.

That future may begin as soon as the middle of April.

“He’s as good a prospect as I’ve seen,” said former Braves third baseman Chipper Jones, who was in camp as a roving instructor.

Jones, to be inducted into the Hall of Fame in July, was considered a foundation player of the franchise. Now first baseman Freddie Freeman has that role. Jones says Acuna has the talent to be another figurehead of the franchise.

Acuna, a native of Venezuela, was sent to the minor league camp on Monday. The Braves would gain a seventh year of contractual control if he spends 15 days at Triple-A Gwinnett before making his major league debut.

The Braves need Acuna’s power and speed in their lineup if they hope to move closer to .500 following their 72 wins in 2017.

Acuna was the youngest player to be named most valuable player of the Arizona Fall League, and he was ranked as Baseball America’s No. 1 prospect. The expectations were soaring even before he hit .432 with four homers, 11 RBIs and four steals this spring.

If there’s any reason for caution, it comes from shortstop Dansby Swanson’s reminder that the adjustment to the major leagues can be difficult even for a top prospect. Swanson, the No. 1 overall pick of the 2015 draft, struggled at the plate as a rookie last season and was sent back to the minors. He showed some improvement following his return to Atlanta and hit .232 for the season.

Swanson said his first lesson from 2017 was “learning who are and trusting that what got you there is enough.”

Another adjustment was the long season. “Physically it’s tough obviously, but mentally it can be tough too, if you let it,” he said.

BEST CASE: For a team that finished last in the NL East only two years ago and has lost at least 90 games in three straight years, a .500 finish would be cause for celebration.

WORST CASE: If Foltynewicz and Newcomb can’t improve on their 2017 seasons, Teheran’s home struggles continue and Swanson can’t hold the starting job at shortstop, the Braves could finish no better than fourth in the division. If the Braves are out of the playoff race by midseason, attendance could fall in the second season at SunTrust Park.

LEFT FIELD OPTIONS: Until Acuna is promoted, Lane Adams and Preston Tucker may form a platoon in left field. Tucker spent two seasons with Houston before spending 2017 in the minors following surgery on his right shoulder. Danny Santana is another candidate.

CONFIDENCE BOOST: Right-hander Julio Teheran will make his fifth straight opening day start . He was 11-13 with a 4.49 ERA, the highest of his five full seasons in the majors, in 2017. “Last year was a year I didn’t want to happen,” Teheran said. “This year is different. This spring has been tremendous for me, and that’s how I want to start the season.”

4 STARTERS FOR NOW: Manager Brian Snitker has named his first four starting pitchers: Teheran, Mike Foltynewicz, Brandon McCarthy and Sean Newcomb. Due to off days, there was no urgency to name a fifth starter. Left-hander Luiz Gohara (groin) was a favorite for a rotation spot, but will open the season on the disabled list.

Veteran right-hander Anibal Sanchez, signed to a minor league deal late in camp, and left-hander Scott Kazmir are among other options.