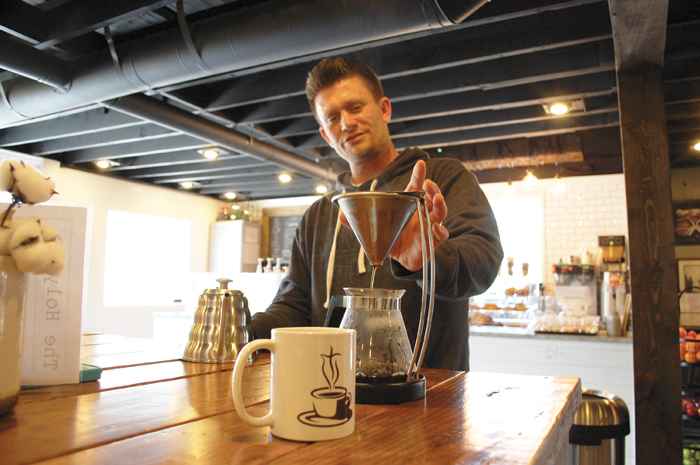 Holy Grind co-owner Dale Perry explains how a pour over coffee is like God's love. "(The pot) is God and the grinds are us," Perry said as he poured. "God takes the Holy Spirit and he pours his love overtop of us. And as he pours it into the grinds, or pours into us, we end up turning into something pure." (Jessica Coates/Salisbury Post)

CHINA GROVE — It all started with a dream.

“My dream was very plain,” said Holy Grind co-owner Dale Perry. “I was sitting on a rock and God came up to me in a white beard. And he sat down beside me and told me I was supposed to do a coffee shop for Him. And we were going to take a lot of people to the Kingdom that way.”

Perry, who works in real estate in Kannapolis, had never wanted to own a coffee shop.

Perry said that, although he wanted to follow God’s wishes, he was continually discouraged by circumstance. Research told him coffee shops were not profitable. When he looked at potential sites, building owners would not accept his bids.

“But the more I pushed it away, it seemed like, the more it was put on my heart and it was pressing me,” Perry said.

Weeks after his initial dream, Perry was working at a women’s conference. It was there that he had his first real conversation with Wesley Kirk, a man who he’d seen at the church they both attend.

“And I told him (the story),” Perry said. “And at that point, he comes up to me and says, ‘That’s so great, man. I’ve got a building up there that I’ve done nothing with for 15 years. Five weeks ago I had a vision that it was going to be a coffee shop and a ministry.’”

Wesley said his dream was similar to Perry’s.

“I’ve seen my wife over in the corner. And I’ve seen a couple of people I did not recognize. And in the chair, as the dream moved forward, the Lord spoke and said, ‘Wesley, it’s being turned into a ministry,’” Wesley said.

Wesley said he also told his wife, Joy, about the dream. But he said they didn’t think too much of it.

“Five weeks after the dream is when I ran into (Perry),” Wesley said. “It was a divine appointment. A set-up.”

Joy said she and Wesley had been trying to find a tenant for the building — located at 819 South Main Street in China Grove —for years.

Wesley’s business of 17 years, Kirk’s Lube and Brake Clinic, is next door to it.

“But nothing ever made it,” Joy said.

Joy has a phrase to describe how Holy Grind came into existence: “Our building. Their dream. God’s plan.”

Wesley said the coffee shop, which also serves as a ministry of sorts, has already helped people.

“A lot of times in church, people really struggle with finding help. Because it’s all about showing up at a certain time, leaving at a certain time,” Wesley said. “And sometimes God’s not about doing that. He’s about just being God all the time. And so for our life, we just want to be available in a coffee house to just love on people and care about people. Because people matter.”

“Some come in and just hang out,” Perry said. “So it’s becoming a safe place.”

Wesley, Joy and Perry attend The Refuge, which is a non-denominational church.

The Holy Grind has a prayer group every Tuesday night at 7 p.m.

“And so it’s not about whether you’re a Baptist or Church of God or Methodist,” Wesley said. “It’s about just being available.”