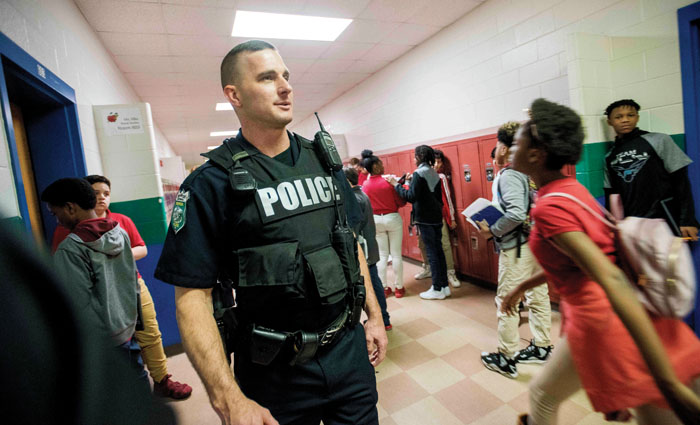 SALISBURY — The day after a teenager gunned down 17 of his fellow students in Parkland, Florida, students at North Rowan Middle gathered around School Resource Officer John Reep. Would something like that happen here, in Spencer? They asked, fear in their eyes.

“If I have anything to do with it, no, it’s not going to happen here,” Reep told them.

While a rash of recent school shootings has heightened security concerns, Rowan-Salisbury safety personnel say school safety is much more complicated than guarding against outside threats.

“Safety is not just protecting the school against a criminal act. Safety is also making sure the kids, staff students and schools know what to do in any type of emergency,” said April Kuhn, chief legal officer for Rowan-Salisbury Schools.

That includes anything from a fire drill to a lockdown drill — and more.

“There’s so much more to school safety than the lockdown,” said Sharon Gardner, risk manager for Rowan-Salisbury Schools. “…The first school shooting was in 1764. This is not a new thing,”

Back when schools and towns were separated, and communication was slow, it was difficult for schools to prepare for emergencies. But the advent of technology has changed that.

And while school shootings currently hold the spotlight, Gardner said that could change tomorrow if another disaster struck a school — like a tornado or earthquake. Each time one occurs elsewhere in the country, staff at Rowan-Salisbury Schools tweak their own responses.

“I think all kinds of institutions have had to adjust their safety measures after massive incidents have taken place,” Kuhn said. “…We have all protected ourselves because the risk is so high if you don’t.”

Rowan-Salisbury Schools takes what Kuhn describes as a “holistic approach” to safety. It’s more than making sure the doors are locked, she said; it’s also providing mental health services, making sure that students feel safe and have support when they’re struggling.

And school security and recovery after an incident is one that involves “hundreds of hands,” Kuhn said. Local school districts have forged strong partnerships with law enforcement, emergency management and other agencies so that, should something happen, the response is near instantaneous.

“I think it’s the collaboration of all these groups in the community that really helps us not miss things,” Kuhn said.

While school safety and security is an ever-changing issue where focus and public concern flit from one scenario to another, behind-the-scenes safety personnel try to anticipate it all.

“I think we need to take all the pieces of the puzzle and treat them equally,” Gardner said.

And the key to unlocking the puzzle lies with the very population staff seek to protect: the students.

Deputy Christopher Flowers acts as a supervisor for school resource officers with the Rowan County Sheriff’s Office. He, as well as others, know that if there’s any safety or security risk or potential threat in a school, students know it first.

It’s something Gardner acknowledges as well.

“These kids, they know what’s going on,” she said.

Like many other institutions, schools have their own rumor mills, and students often know when their peers are struggling, or when something poses a danger to the school. The difficulty, officials said, is getting them to talk about it.

It’s a piece that has helped shape the unique role of school resource officers, who are part law-enforcement, part friend. Flowers said that while safety and security are huge parts of the job, and the impetus for schools creating the position, resource officers do so much more.

“We are also that mentor, role model piece as well,” he said. “You can prevent a lot of stuff from happening by having a relationship with students. … A good resource officer is a good listener, a good communicator, a good mediator.”

Resource officers have their “head on a swivel” looking out for safety concerns, but they also pour an enormous amount of time, effort and heart into forging friendships and positive relationships with students.

“We’re not just standing there waiting for the crime to happen, waiting to be called,” he said.

For Flowers, it’s one of the most important pieces of the job.

“It’s important that the officer go into a school, make it his own, build relationships and make a difference in that community,” he said.

In his day-to-day work, Reep patrols the halls of North Rowan Middle. He checks each outer door to make sure that it’s locked and secure, keeps an eye out for fire hazards and monitors the school’s security system. But he also greets students by name, with a high five, a hug or a handshake. He’s served as a chaperone on field trips, a guest teacher in classrooms and works to help students find lost items.

“I absolutely love my job,” he said with a smile.

Often, students shy away from Reep the first time he meets them. But with some time — and a few good high fives — they gradually open up. A few students have even pulled him aside to tell him he was “their favorite cop.”

While the job has its challenges, giving kids a chance to see an officer in another light, and being able to be a positive influence in a student’s life makes it all worth it, Reep said.

Gardner and Kuhn say the same thing is true for teachers and other staff. The better the relationship a child has with an adult, the more likely they are to come to them for help, or if they notice something is wrong.

Kuhn said she works with teachers and students to let someone know if they see something like bullying, or even something as simple as an outside door propped open.

It’s something parents can help with, too.

Kuhn encourages parents to talk to their children after school — to ask them about their day, or how they felt.

“That’s huge,” she said. “…Children are willing to tell their parents a lot more than (parents) think they are.”

Gardner says its something she tries to impress upon parents she talks to.

Disasters like the one at Parkland or the infamous massacre at Columbine are often planned far in advance. And it’s prompted Flowers and others to impress upon students that if they see something, say something.

And anyone — parent, student or teacher — can report a concern online. School websites have options to report bullying online, but Gardner said it can be used to report any concern.

“If you hear a student say something about doing harm to themself, you can report that,” she said.

The form even has the option to report things anonymously, for students who might be skittish about tattling.

“There are all kinds of ways for students to safely report something,” Kuhn said.

If everyone plays their part — from student to police officer — Kuhn and Gardner have no doubt that Rowan-Salisbury Schools will stay a safe haven for students.

“Safety is a big job working with a lot of people to make it right,” Gardner said.

Safety or bullying reports can be made at https://app.sprigeo.com/district/rowan-salisbury-school-system. Those with safety concerns can contact Sharon Gardner, Risk Manager, at sgardner@rss.k12.nc.us.