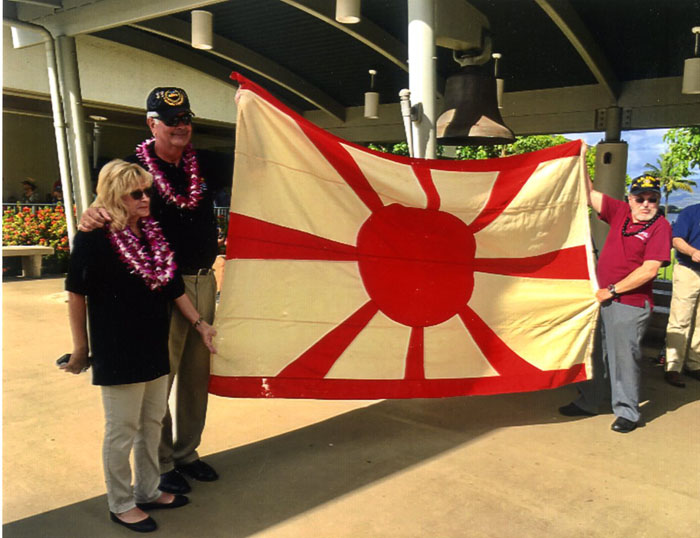 Photo courtesy of Dianne Hall Dianne Hall of Rowan County stands with John Hedley, left, and Roger Schiradelly, who are holding the Japanese flag from the battleship Nagato that Hall presented to the Pearl Harbor history museum in October 2016. This rear admiral's flag had been in her family's possession since her father, the late Robert D. Hartman, had taken it from the Nagato on the day of the ship's surrender Aug. 30, 1945.

SALISBURY — You can find Dianne Hall dishing out coffee and doughnuts every Tuesday morning with other members of the Elizabeth Maxwell Steele Chapter of the Daughters of the American Revolution.

The women serve military veterans who meet weekly at Thelma’s restaurant. As she refills their cups and buses their tables, most veterans in the room don’t know Hall’s personal war story — one linked to her father, a Japanese flag, a noteworthy Japanese battleship and Pearl Harbor.

But it’s worth the retelling, and it all led to state and national recognition for the local DAR chapter and a memorable trip for Hall to Hawaii in October 2016.

As a 6-year-old stationed with her parents at Fort Huachuca, Arizona, Hall remembers being cold one day and reaching for a folded piece of heavy, woolen fabric she thought was a blanket. It quickly proved unbearably itchy.

It represented her first brush, so to speak, with history. Years later when she was an adult and her father talked more about his war experiences, Hall learned the significance of that blanket, which was really a Japanese flag from World War II.

It was something the Hartman family had used as a bedspread and even as a basement wall decoration.

Hall’s late father, Robert D. Hartman, secured the flag from the Japanese battleship Nagato after he and other sailors from the USS Horace A. Bates, a high-speed destroyer and transport ship, boarded the Nagato with no resistance on Aug. 30, 1945.

By then, the Nagato was the last remaining battleship of the Japanese Imperial Navy in Tokyo Bay. The U.S. atomic bombs already had been dropped on Hiroshima and Nagasaki, and in a few more days, the official Japanese surrender would end World War II.

History says the Nagato was the first Japanese battleship ever to be captured afloat in the war. It also served as flagship of Admiral Isoroku Yamamoto, credited with being the mastermind of the Japanese attack on Pearl Harbor on Dec. 7, 1941.

It was from the Nagato’s bridge that Yamamoto received word his surprise attack had been launched.

When members of the Bass “prize crew” were able to board the Nagato, 16 Japanese officers were there, waiting to surrender the ship. The ceremony took just 10 minutes and symbolized the unconditional surrender of the Japanese Navy.

Afterward, members of the Bass crew, including Hall’s father, ran through the battleship, gathering any significant souvenirs they could find.

Hartman, 20 at the time, grabbed the red-and-white sunburst flag along with handguns, rifles, binoculars, a sailor’s medicine box and military-issue chopsticks. Many items Hartman would sell or give away in the years to come.

But among the few artifacts he kept was the flag. When Hall had a family of her own, she asked her father whether she could incorporate the flag into a military red-white-and-blue theme she had created for her son’s bedroom.

The flag covered a whole wall, but when Hartman saw it, he decided he wanted the flag back, so he could hang it in his basement in Reidsville.

Truth be known, Hall told the Post in years past, the basement served as a game room, and Hartman’s grandchildren sometimes used the thick flag as a dartboard.

Robert Hartman served 28 months for the U.S. Navy in the Pacific theater during World War II, After coming home, marrying Joyce Crowell and working for a time in local cotton mills and for the Stanback Co. in Salisbury, Hartman re-enlisted — but this time in the Army.

Hartman built a strong reputation as a mess sergeant in both the Navy and Army, and he would make the Army his career until retiring in 1967. His Army service included the Korean War.

Robert and Joyce had five children: Dianne, Betty Jo Eller, Sherry Bryant, Robert Hartman Jr. and Wanda Morris. They followed their parents to Army bases across the United States, as well as Japan and Germany.

When he retired, Robert Hartman became a cook at Pfeiffer College, which led to Dianne’s graduating from North Stanly High and staying in this area.

As part of an oral history project, Rowan Public Library recorded Hartman’s war recollections before his death in 1999.

Joyce Hartman later gave the Japanese flag to Dianne, who shared the story of the family’s unusual World War II artifact with the Post in 2011, on the 70th anniversary of the Pearl Harbor attack.

It was Roger Schiradelly, known for his connection to Richard’s Coffee House for veterans in Mooresville and the “Living Military Museum” associated with it, who learned of the flag and suggested that Hall donate it to the National Park Service in Hawaii.

John Hedley, president of the Living Military Museum, assisted Hall in contacting the National Park Service, which welcomed the flag’s donation. Schiradelly and Hedley accompanied Hall to Hawaii for a formal presentation of the flag Oct. 13, 2016, at the Pearl Harbor Visitor Center.

“If it wasn’t for Roger Schiradelly and going to John, this flag wouldn’t be where it is today,” Hall says.

Jacquelyn Ashwell, superintendent of the World War II Valor in the Pacific National Monument said at the presentation the flag was a rare and special artifact.

“This is an amazing donation,” Ashwell said. “Here at the museum, we receive many wonderful tokens of history, but having such a relic from a high-profile ship as is the Nagato, the ship that was Admiral Yamamoto’s flagship, is an extraordinary gift on behalf of the American people.”

Scott Pawlowski, the National Park Service’s chief of cultural and natural resources for the museum and visitors center at Pearl Harbor, agreed it was a significant donation.

“It’s a witness to both the message that Yamamoto sent out for the Japanese to proceed with the attack on Dec. 7,” Pawlowski told the Associated Press in 2016, “and it participated in the attack from a distance, providing cover screening as the fleet was returning from Hawaiian waters.”

On the presentation day, Hall gave a speech and afterward found herself surrounded by local reporters. She conveyed her feelings of how heartened she was the flag would be preserved and that it would be seen by generations to come from many different countries.

“It just needs to be back where it all started,” Hall says today. “It’s history for everybody.”

Hall emphasizes the flag was given to the park service by herself and her siblings in honor of their father.

“This way my dad is fully honored and will always be down in history,” Hall says.

It was only in 2016 that Hall learned the family actually had possessed a Japanese rear admiral’s flag, not a battle flag as it always presumed.

Hall also presented the Valor in the Pacific museum at Pearl Harbor with the Japanese sailor’s medicine box and the sailor chopsticks.

For the Hawaiian ceremony, Hall wore a Richard’s Coffee Shop shirt and the insignia of the DAR.

Hall and her DAR chapter compiled all the information about the Japanese flag, its history and how it made the trip to Hawaii into a nomination for DAR state and national competitions. The chapter won the state regent’s award and came in second nationally.

Last October, Kim Edds — the local chapter regent — accompanied Hall and other DAR members to Richard’s Coffee Shop to present a state regent’s certificate of appreciation to Hedley and Schiradelly, who made the Hawaii trip possible.

The flag is no longer a dartboard in the basement.