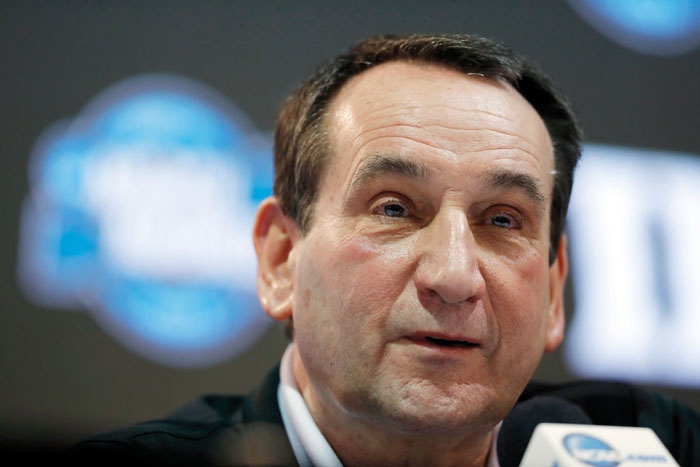 OMAHA, Neb. (AP) — In a tournament defined by unpredictability, there will finally be a regional final that makes sense.

No. 1 Kansas and No. 2 Duke will square off in the Midwest final Sunday for the last spot in the Final Four — and the stakes are huge even by Elite Eight standards.

Kansas coach Bill Self, who recently joined Krzyzewski and Wooden in the Naismith Hall of Fame, is hoping to snap a two-year losing streak in regional finals and a 2-7 personal record in Elite Eights.

After scores of upsets produced some rather strange matchups elsewhere, it’ll be “Rock, Chalk, Jayhawk” vs. Coach K and the Blue Devils in a classic finale in Omaha.

“It’s great when you have two programs of this nature, this status in the history of our game play for a Final Four berth. I think it’s great for the sport,” Krzyzewski said.

As for the latest chapter in the Kansas-Duke series, the top-seeded Jayhawks (30-7) are more like a plucky underdog — at least by their high standards — while second-seeded Duke (29-7) and its cadre of ridiculously talented freshmen appear to be rounding into title-contending form. Duke is a betting favorite in the game even though it is the lower seed.

The Jayhawks have clawed their way into their third straight regional final as a No. 1 behind teamwork and a toughness that wasn’t always there in the winter.

Their last two wins, over Seton Hall and Clemson, came by just 4 points apiece — but Kansas has won six straight postseason games after tearing through the Big 12 Tournament.

“It’ll be a tough game. But it’s going to be a fun game,” Self said. “We know we’ve got our hands full. But we like to think they have their hands full too.”

Duke cruised through to the Sweet 16, but then had to survive a furious challenge from ACC rival Syracuse and its bewildering 2-3 zone on Friday night. The young Blue Devils have flourished under the leadership of senior captain Grayson Allen, who is 12-2 in the NCAA Tournament.

“We’re both here for a reason. It’ll be a good one,” Duke star Marvin Bagley III said.

Here are some of the story lines to look out for when the Blue Devils face the Jayhawks:

For all the talk about the young stars on each team, each squad is run by a star senior guard coming off a so-so game. Devonte’ Graham, the Big 12 player of the year for Kansas, shot just 4 of 12 from the field in an 80-76 victory over Clemson, and Allen was just 3 of 14 on 3s in a 69-65 win over the Orange. But both Krzyzewski and Self expect their veteran stars to bounce back. “He’s the best intangibles guy we’ve ever had here,” Self said of Graham.

It’s a good thing that Kansas sophomore big man Udoka Azubuike is fully healthy after a strained knee ligament kept him out of the Big 12 Tournament, because Bagley promises to be a handful. Bagley had 22 points and seven rebounds against Syracuse — no small feat considering how long and athletic the Orange were. Azubuike played an NCAA Tournament-high 25 minutes against Clemson, scoring 14 points with 11 rebounds. Keeping Azubuike out of foul trouble will be crucial for Kansas.

BLUE VS. BLUE IN THE BIG DANCE

Duke and Kansas have met five previous times in the NCAA Tournament, most notably in 1991 when the Blue Devils beat the Jayhawks 72-65 for the first of two straight NCAA championships. The two teams last met in the Big Dance in the 2003 Sweet 16, when Kansas upended Duke 69-65 behind coach Roy Williams, who would leave Lawrence to take over North Carolina shortly after that season ended.

Kansas is ranked second in all-time wins with 2,247, and Duke is fourth at 2,144. …The Jayhawks will be making their 22nd appearance in the Elite Eight, third-most in Division I history, while Duke will play in their 21st regional final. …The Blue Devils are 9-6 against No. 1 seeds …Kansas clinched its third consecutive 30-win season on Friday, a few hours before Krzyzewski picked up his 1,100th career victory.

“When you start thinking about (breaking records) you can rationalize. And rationalization is one of the things that stops people from continued excellence, because they live in the past. And then they stop adapting and they stop getting hungry,” Krzyzewski said when asked about potentially passing Wooden in Final Four appearances.