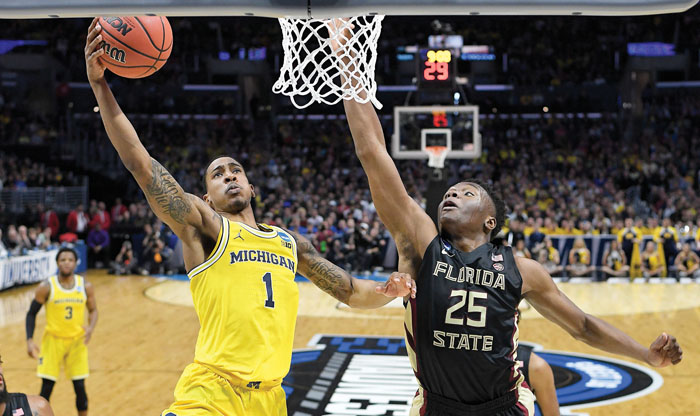 LOS ANGELES (AP) — With more defensive will than shooting skill, Michigan muscled its way back to the Final Four.

Charles Matthews scored 17 points and Michigan earned its first Final Four berth since 2013 with a 58-54 victory over Florida State on Saturday night in the West Region final.

Moe Wagner added 12 points as the Wolverines (32-7) earned their 13th consecutive victory by persevering through a defense-dominated second half and holding off a late charge from the Seminoles (23-12), who had already knocked off three higher-seeded opponents on their school’s longest NCAA Tournament run since 1993.

With tenacious defense and just enough made free throws down the stretch, Michigan hung on and advanced to San Antonio, Texas, next weekend to face the underdog heroes of Loyola-Chicago (32-5), who stunned the sport by winning the South Region.

The third-seeded Wolverines are much less of a surprise, but the achievement is no less impressive for coach John Beilein’s squad, which wore its “Do More, Say Less” shirts throughout the week.

In fact, Michigan let its fans do the talking: The Wolverines had a distinct home-court advantage from thousands of vocal fans packed into the lower bowl of Staples Center, and they seemed to need all of those cheers to survive an off shooting night.

“I said we’re shooting 33 percent,” Beilein said. “That might change in the second half, but at the same time, we’ve got to understand we may not make shots, (but) we’re still going to win the game with our defense. We’ve just got to hang in there, don’t give them second shots, try and take away the 3 ball, the drive. We did a great job on defense.”

Phil Cofer scored 16 points for the ninth-seeded Seminoles (23-13), who couldn’t match their late rally past top-seeded Xavier last week because they simply couldn’t score consistently, going 7 for 30 from the field in the second half.

Then again, the Wolverines didn’t light it up against Florida State’s defense either, going 4 for 22 on 3-pointers.

Michigan nursed a small lead throughout the second half, but P.J. Savoy trimmed the lead to 55-52 on a 3-pointer with 1:17 to play.

With Michigan fans holding their breath, Savoy then missed a potential game-tying 3-pointer and two more 3-pointers in the final minute, including a final shot under pressure with 12 seconds left.

With Michigan up by four, Florida State allowed the Wolverines to dribble out the clock without fouling again.

Michigan’s Zavier Simpson and Duncan Robinson combined to hit three free throws in the final minute to keep Michigan ahead.

The Wolverines discovered early on that they wouldn’t be able to run away from the Seminoles with the same ease they used in the Sweet Sixteen to dispatch Texas A&M, scoring 99 points on nearly 62 percent shooting.

Florida State managed only two points in a 10 ½-minute stretch spanning halftime, and Michigan took a 10-point lead before Cofer led the Seminoles back into it.

Florida State: The loss ended an incredible run for coach Leonard Hamilton’s Seminoles, who hit their stride at the perfect time. Florida State went 9-9 in ACC play and lost in the first round of the conference tournament for its fifth defeat in eight games overall, but still made the NCAA field and went on a remarkable run.

Michigan: The Wolverines are carving their own names in their school’s rich basketball history with an impressive late-season roll. After winning the Big Ten tournament, Michigan survived a rough opening weekend in Wichita before earning back-to-back wins in Los Angeles.

Staples Center was largely packed with maize-and-blue fans of the Wolverines, who have a vast alumni base in California. Beilein predicted a major advantage for his team, and he was proven correct. The crowd included Rudy Tomjanovich, the Michigan alumnus and former Lakers coach, who watched in Wolverines gear near courtside.

Matthews usually was a complementary scorer during the Big Ten season, but he has stepped into a starring role in the Tournament with three double-digit performances. He added a team-leading eight rebounds.

Florida State: The Seminoles’ impressive March should turn plenty of recruits’ heads as they continue to bury the myth that Florida State is a football school.