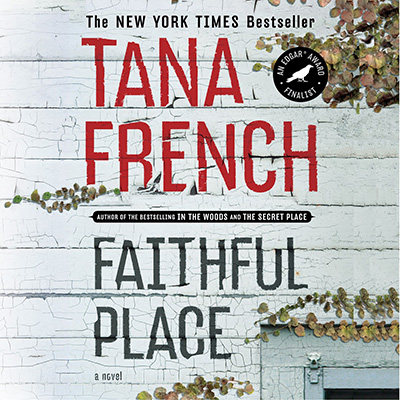 By Katherine A. Powers

Of Tana French’s six superb Dublin crime novels, “Faithful Place,” newly rereleased as an audiobook, is the standout, thanks to narrator Tim Gerard Reynolds’s terrific command of accents and nimble juggling of voices.

The story begins with the discovery of a suitcase in a house under renovation in a working-class section of Dublin, now on the cusp of gentrification. The suitcase is — or was — the property of Rosie Daly, believed to have run off to England two decades ago, leaving behind the boyfriend she was meant to elope with. That is Frank Mackey, now a cop, who is warned off the case by the officer in charge, his old rival, “Scorcher” Kennedy, who “wore his swagger like it was part of his El Snazzo suit.”

The discovery of Rosie’s body puts the book into who-dunnit territory, and family and social tensions give it heft, but French’s genius for lyrical riffs of dialogue and the cut and thrust of insult and gibe at which Dubliners are such masters achieves brilliance in the audio version. The Irish-born Reynolds renders this gritty backchat with perfection, ranging from the “meet-my-sinuses accent” of a middle-class aspirant to the officious, singsong delivery of a country-born policeman with a voice “six-foot deep in bog.”

Veteran celebrity biographer J. Randy Taraborrelli returns to Kennedy-Bouvier territory in high-tattle mode to plow another furrow in its rich loam of gossip, scandal and tragedy.

Narrator Ann Marie Lee’s flexible voice moves from gushing tell-all rapture over salaciousness (Jackie in sexual congress in an elevator!), histrionics (sporadic face slapping) and curious customs (Lee Radziwill’s maid rushing in to toss a gardenia into the toilet after every use), down several keys to teary dolefulness over the many deaths.

Her over-the-top performance perfectly suits this story of ruthless campaigns for money and power, the two key ingredients, according to Janet — aka Mummy — of a “life well lived.”

The story’s most sympathetic character is Lee, constantly competing with her sister and unable to stay the course in the many projects she mounted.

The book may not reveal much that is new, but already knowing that Aristotle Onassis was Lee’s paramour before Jackie snagged him or that Gore Vidal described Mummy’s second husband, Hugh Auchincloss, as “a magnum of chloroform,” does not lessen the guilty pleasure of hearing it conveyed with such infectious enthusiasm.

Perveen Mistry, Bombay’s first female solicitor, works for her father in his law office. Among his clients is the family of the recently deceased Omar Farid, a man with three wives living in complete purdah on Malabar Hill.

The family’s agent, Faisal Mukri, has sent a request, ostensibly from Farid’s widows, asking that their inheritance be given to a charitable organization. Something is fishy here and, as the women are sequestered from men, Perveen is put on the case. She discovers Mukri is a very bad egg and that the women have their own dicey secrets.

When a member of the household is murdered, Perveen is drawn further into the insalubrious doings on Malabar Hill. The plot barrels along, picking up cultural complexity and flashbacks to Perveen’s past, where a youthful misjudgment has later, possibly lethal ramifications.

Soneela Nankani delivers the general narration in a warm American voice and gives a trim, restrained Indian accent to the dialogue, modulating register to distinguish the characters. This is a first-rate performance inaugurating a most promising series.

Powers reviews audiobooks for The Washington Post every month.