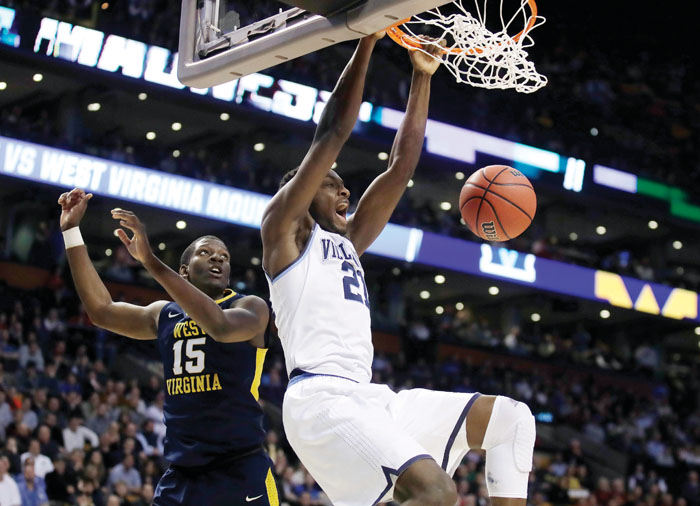 BOSTON (AP) — Villanova’s 3-point party rolled past the pressure of West Virginia to bring the Wildcats to the doorstep of another Final Four two seasons after winning a national championship.

The top-seeded Wildcats continued their outside feast, downing the fifth-seeded Mountaineers 90-78 on Friday night to earn their second trip to the regional finals in three seasons.

Jalen Brunson led Villanova with 27 points and Omari Spellman had 18 with eight rebounds as Villanova overcame the West Virginia press by hitting 13 of 24 shots from 3-point range.

Jevon Carter and Sagaba Konate each at 12 points to lead West Virginia.

Villanova (33-4) has now made 47 3-pointers for the tournament. The outside shots helped the Wildcats overcome 16 turnovers.

The Wildcats struggled at times, especially in the first half, but dug out of a six-point hole in the second half with an 11-0 run.

“What a game, man. I hope that looked as good as it did from the bench, man,” Villanova coach Jay Wright said. “That was the most physically demanding, mentally draining 40 minutes we’ve played in a long time. They are so relentless.”

The Mountaineers (26-11) stayed close throughout the night, ramping up the pressure and making Villanova play faster than it wanted to early. But foul trouble throughout the second half was too much for West Virginia to overcome after it gave up the lead.

Carter was called for his third with 17:33 left in the game. That was followed by Daxter Miles being whistled for his third and fourth fouls over a two minute stretch that sent him to the bench with 15 minutes remaining.

West Virginia was able to adjust for a while and took advantage of a more than three-minute Villanova scoring drought to take a 60-54 edge with just over 11 minutes left.

But Villanova heated up again. Its 11-point run was capped by a thunderous block and dunk on the other end by Omari Spellman that pushed the Wildcats back in front 65-60.

The Wildcats kept the momentum going, stretching the lead to 76-66 on a 3-pointer by Brunson.

West Virginia never got closer than 4 points the rest of the way.

Villanova led 44-42 at the half after a fast-paced opening 20 minutes. Brunson led all scorers with 16 points in the half, with West Virginia getting 11 points from Daxter Miles.

The Wildcats came out firing, connecting on their first seven field goals. They handled the Mountaineers’ pressure well early. But the Wildcats had three turnovers over a 65-second stretch during an 8-0 Mountaineers run that put them in front 33-30.

West Virginia: It’s a tough loss for the Mountaineers, but it doesn’t diminish the incredible effort by a senior class that reached the Sweet 16 three times in four years.

Villanova: The Wildcats are back in the Elite Eight for the first time since they won the national championship in 2016.

Villanova awaits the winner of Texas Tech and Purdue in Sunday’s regional final.