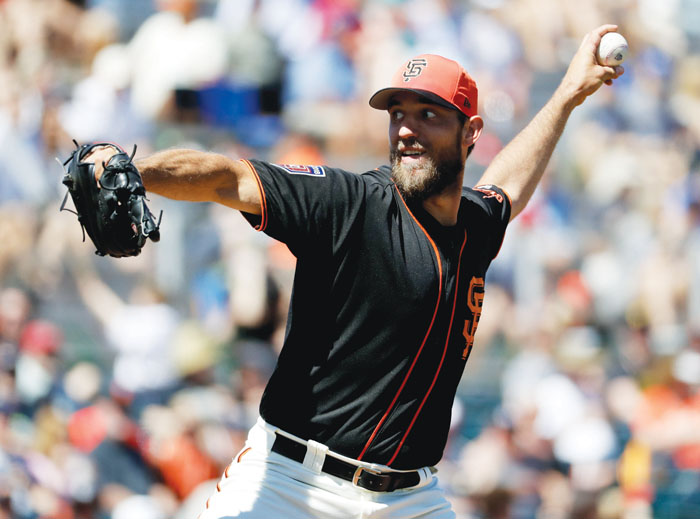 SCOTTSDALE, Ariz. (AP) — San Francisco Giants left-hander Madison Bumgarner is hurt for the second straight year, breaking a bone in his pitching hand when hit by a line drive off the bat of Kansas City’s Whit Merrifield during a spring training game on Friday.

The Giants said X-rays showed the 28-year-old fractured the fifth metacarpal on the outside of his left hand.

“It’s tough. But I can handle it,” Bumgarner said. “These guys can handle it. This obviously was not what I was expecting out of my last start. But it happened and I can deal with it.”

Bumgarner, the 2014 World Series MVP, missed nearly three months last season after a dirt bike accident on April 20 during an off day in Colorado. This is a big blow for the Giants as they try to rebound from a surprising last-place finish in the NL West with 98 losses.

“It’s just a downer. This was a short day. I feel for him,” manager Bruce Bochy said. “Obviously, we know what he means to us, but where he was, how well he’s thrown the ball all spring. Unfortunately, you’ve got to deal with these things. But this one certainly was a downer today because we were all getting ready to go to San Francisco and now we’ve got to make some adjustments.”

After six straight seasons with double-digit wins, more than 200 innings and 30-plus starts, Bumgarner went 4-9 with a 3.32 ERA in 17 starts last season and threw just 111 innings.

DETROIT (AP) — A Detroit corner that has been a stage for many of baseball’s greatest players now will host youth games, events and other programs for young people.

A ribbon-cutting is scheduled at 10 a.m. Saturday at The Corner Ballpark on the site of the former Tiger Stadium. A high school doubleheader will be played in the afternoon.

The facility also is headquarters for the nonprofit Detroit Police Athletic League which serves more than 14,000 girls and boys. The 8,500-square-foot building is adjacent to the Willie Horton Field of Dreams, named after the former hometown fan favorite who helped the Tigers win the 1968 World Series.

More than $20 million was donated for the project.

“There continues to be a gap in resources to fund and activate youth sports programming, which is why PAL is so critical to Detroit’s landscape,” said Tim Richey, Detroit PAL’s chief executive.

Tiger Stadium opened in 1912 as Navin Field. Hall of Famers Ty Cobb, Hank Greenberg, Al Kaline and others played for the Tigers.  Babe Ruth, Mickey Mantle, Lou Gehrig, Bob Gibson and Nolan Ryan were among the greats from other teams who drew big crowds to the stadium.

Horton spent 14 seasons with the Tigers. The team retired his No. 23, and a statue of his likeness stands at Comerica Park where the team moved after the 1999 season. The last portion of the old ballpark was demolished in 2009.

Detroit’s PAL later was awarded the site. Construction on the new facility and field officially started in 2016.

The Foley & Lardner law firm has been advising Detroit PAL on the field’s redevelopment and led negotiations with the Detroit Economic Growth Corp. to get the land rights from the city. The firm also sought new markets tax credits and bridge loans to help finance the project.

“This would be an exciting project for any firm to work on, but as a firm that has been in downtown Detroit since the founding of our office nearly 20 years ago, it’s especially fulfilling to see this one come together,” said Steven H. Hilfinger, a Foley & Lardner attorney and firm partner.

PNC Bank partners with its 1st sports league in…