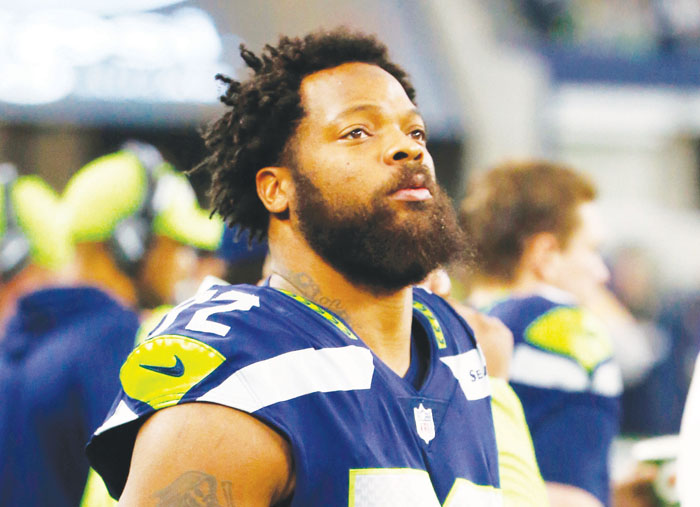 FILE - In this Dec. 24, 2017, file photo, Seattle Seahawks defensive end Michael Bennett (72) watches his team play the Dallas Cowboys during an NFL football game in Arlington, Texas. A Harris County, Texas, grand jury on Friday, March 23, 20187, indicted Philadelphia Eagles defensive end Michael Bennett on a felony count of injury to the elderly for injuring a 66-year-old paraplegic who was working at NRG Stadium in Houston to control access to the field at Super Bowl 51, prosecutors said. The Eagles earlier this month acquired Bennett from the Seahawks. (AP Photo/Michael Ainsworth, File)

HOUSTON (AP) — Authorities issued a warrant Friday for the arrest of three-time Pro Bowl defensive end Michael Bennett, who is accused of injuring a paraplegic woman as he tried get onto the field at last year’s Super Bowl to celebrate with his brother.

The Harris County district attorney’s office said a grand jury indicted the 32-year-old Bennett, acquired earlier this month by the Philadelphia Eagles, on a felony count of injury to the elderly.

Bennett was a spectator at the game at NRG Stadium in Houston in February 2017 when he tried to get onto the field immediately afterward to see his brother, Martellus Bennett, a tight end for the Patriots at the time. Prosecutors allege he pushed through security personnel, including a 66-year-old woman in a wheelchair who was a stadium employee and who had told him to use a different entrance to access the field. Bennett is also accused of pushing two other people, including another woman, and ignoring a request by a police officer to stop as he made his way onto the field.

Houston Police Chief Art Acevedo said Bennett allegedly told the people he had pushed, “You all must know who I am and I can own this (expletive). I’m going down to the field, whether you like it or not.”

Acevedo called Bennett “morally bankrupt” for pushing the two women. Police said the disabled woman suffered a sprained shoulder when she was allegedly pushed by Bennett, hitting the back of her 800-pound, motorized wheelchair.

“Mr. Bennett may think that because he’s an NFL player and some time passed … he may have thought that, number one, rules don’t apply to him, number two, he doesn’t have to respect the dignity of a paraplegic woman who’s trying to earn a living,” Acevedo said at a news conference.

Acevedo said a detective did not actively start working the case until September because the police department had prioritized more serious cases.

The charge of injury to the elderly can be filed if a person intentionally or knowingly causes injury to a person 65 or older. It carries a penalty of up to 10 years in prison and a $10,000 fine.  County authorities say they’re talking with Bennett’s legal team about surrendering on the charge.

The Eagles acquired Bennett from the Seattle Seahawks, where he became one of the dominant defensive linemen in the game. Bennett had 8 ½ sacks last season and has 54 in his nine-year career. Bennett has three years remaining on his contract, with a base salary of just $1.65 million in 2018. That number jumps to $6 million in 2019 and $7.5 million in 2020.

“We are aware of the situation involving Michael Bennett and are in the process of gathering more information,” the Eagles said. “Because this is an ongoing legal matter, we will have no further comment at this time.”

Bennett’s agent, Doug Hendrickson, did not respond to a message seeking comment Friday.

Brock Osweiler signed a one-year contract Friday with the Dolphins to provide veteran insurance behind Ryan Tannehill, who is coming back from two knee operations.

Gase was an assistant with the Broncos when Osweiler was a young reserve for them in 2012-14. Osweiler went 0-4 as the Broncos’ starter last season and has 25 career starts in six NFL seasons.

With the Dolphins he replaces Matt Moore, a free agent after seven years as their backup quarterback. Despite adding Osweiler, the Dolphins will consider drafting a quarterback next month.

Tannehill is expected to return after missing all of the 2017 season, but he has twice had surgery since his most recent game.

The Dolphins made two other moves to upgrade their offense. Five-time Pro Bowl running back Frank Gore finalized a deal Thursday. Tackle Sam Young agreed to terms on a one-year contract to remain with the Dolphins.

Gore, who turns 35 next month, has rushed for 14,026 yards to rank fifth on the all-time list. He spent the past three seasons with the Indianapolis Colts, and ran for 961 yards last season.

Young, an eight-year NFL veteran, started six games at right tackle for the Dolphins last year after Ja’Wuan James was hurt. He’s expected to be James’ backup again this season.