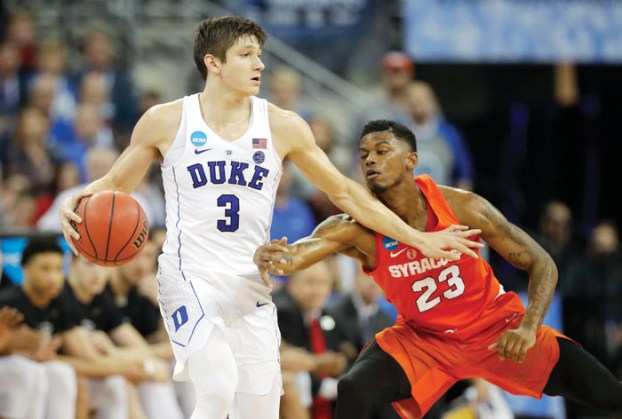 Syracuse's Frank Howard (23) reaches for a ball as Duke's Grayson Allen (3) keeps it away during the second half of a regional semifinal game in the NCAA men's college basketball tournament Friday, March 23, 2018, in Omaha, Neb. (AP Photo/Charlie Neibergall)

Duke turns back Orange, 69-65, sets up matchup with Kansas 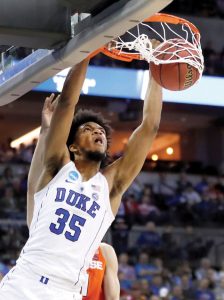 By ERIC OLSON, AP Sports Writer
OMAHA, Neb. (AP) — All that talk about busted brackets and the maddest March ever — not happening in the Midwest.
What started as a chess match turned into a free-throw-shooting contest. When it was over, Duke won.
Grayson Allen and Gary Trent Jr., made four clutch free throws down the stretch to help Duke hold off Syracuse 69-65 and land the Blue Devils in a 1 vs. 2 regional final against Kansas.
“A great game to win, a very difficult game to lose,” Blue Devils coach Mike Krzyzewski said.
Freshman Marvin Bagley III scored 22 points to help Krzyzewski’s second-seeded Blue Devils (29-7) pull away from Jim Boeheim’s Orange — the last at-large team to make it into the field, and one looking for a near-repeat of two seasons ago when it made the Final Four as a 10 seed.
This year, Syracuse (23-14) was an 11, but in an NCAA Tournament turned upside down, the Elite Eight already has one of those — Loyola-Chicago in the South.
Syracuse is no typical 11, and this was a zone-centric battle of wits between two of the most renowned coaches in the game.
No lead ever reached double digits, and not until Trent Jr. swished two from the line with 6.3 seconds left was the game sealed for Duke, which is one win away from taking Krzyzewski to his record 13th Final Four. He currently shares the record of 12 with John Wooden.
Early in the second half, Krzyzewski did something Wooden never would’ve dreamed of: He tore off his jacket and threw it to the floor, calling a timeout after Syracuse scored two quick baskets to trim its deficit to three.
“It set the tone for me,” said Coach K, who has two freshmen, Bagley III and Wendell Carter Jr., who will likely be NBA lottery picks later this spring. “You could see. I coach ’em, so I could see, they were real young. They had young looks. Thank goodness they got out of it.”
The teams went back and forth, trading alley-oop dunks and 3-pointers until the end-game played out with 21 seconds left.
Syracuse fouled Allen, who went to the line for a 1-and-1 and calmly sank both to push the lead to 67-62. Syracuse scored, then fouled Allen again, and he missed the front end. Leading by three, Duke intentionally fouled Tyus Battle, who made only one of his two free throws to cut the deficit to two with 7 seconds left.
Syracuse closed by fouling Trent Jr., who sealed it by improving to 33 of 34 from the line in the last five minutes of games this season.
“I thought coming into this game Duke was playing at a tremendously high level,” Boeheim said. “We started out playing as well offensively as we have in a long time. We hit a little dead spot at the end of the first half that we couldn’t quite come back from.”
Bagley III scored 13 of his 22 points and had all eight of his rebounds in the second half. Seven of those boards were on the offensive end and led to second-chance baskets.
“We turned the ball over a little too much in the first half,” said Battle, who led the Orange with 19 points. “We got it together in the second half and took care of the ball a little better, moved the ball better and got it into the middle.”
BIG PICTURE
Syracuse’s 2-3 zone causes problems for almost every opponent, but Duke found holes, throwing lobs behind big men in the middle for layups and dunks. Meanwhile, Allen was quick to shoot the 3 in the second half. All but one of his 15 attempts from the floor were from 3. He went 3 for 14 from behind the arc and finished with 15 points.
WHAT HE SAID (AND DIDN’T SAY)
“Battle is one of the best players in the country…He’s a big-time player. I love Tyus,” Coach K said. “I love their team. I love their coach even more. He does such a great job with them.” But when asked about Kansas, Krzyzewski demurred, saying it was out of respect for Syracuse and his good buddy, Boeheim. Krzyzewski said he’ll talk KU Saturday.
UP NEXT
Syracuse: Even if Battle declares for the NBA draft as an underclassman, the Orange probably returns everyone else in their seven-man rotation, and they bring in a top-20 recruiting class that includes two top-50 prospects.
Duke: The Blue Devils have won three of five all-time meetings against Kansas in the tournament, most recently in the 2003 Sweet 16.
___
More AP college basketball: https://collegebasketball.ap.org ; https://twitter.com/AP_Top25 and https://www.podcastone.com/ap-sports-special-events

BOSTON (AP) — Chris Beard has done it to Purdue again. The Texas Tech coach knocked the Boilermakers out of... read more