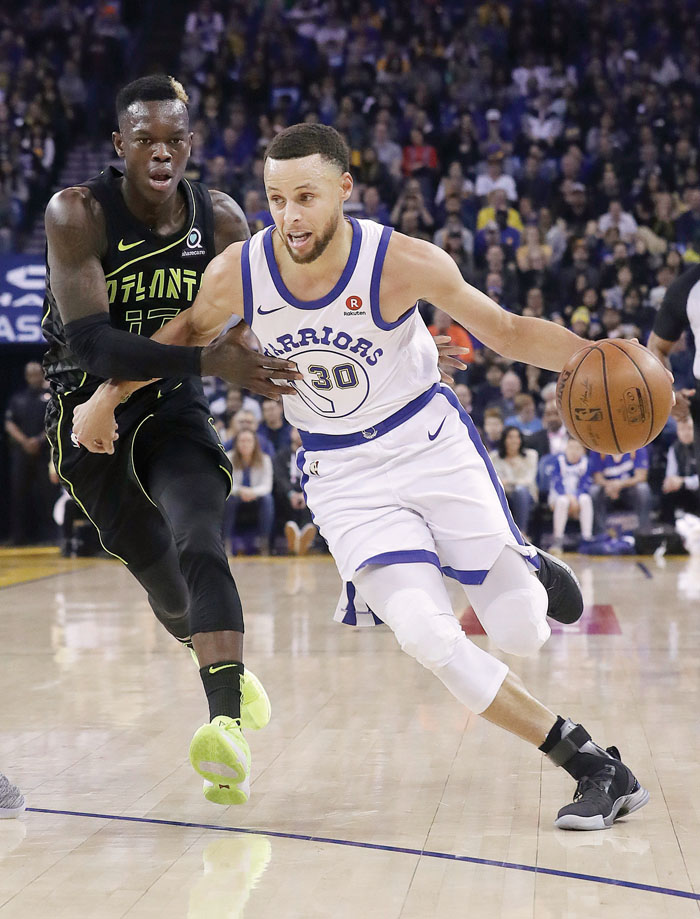 By The Associated Press
OAKLAND, Calif. (AP) — Stephen Curry returned from a six-game absence with a right ankle injury only to strain his left knee after scoring 29 points, and the beat-up, undermanned Golden State Warriors held off the Atlanta Hawks 106-94 on Friday night
Curry grimaced as he hopped around and made it to the bench on a tender left side with 3:09 left in third after JaVale McGee fell over and the center’s right elbow appeared to pound into Curry’s left knee. The two-time MVP immediately sat in a chair and put his head down before going into the locker room.
Nick Young scored 24 points with six 3-pointers as the defending champions were already down their other All-Stars — Kevin Durant, Draymond Green and Klay Thompson.
Young, Patrick McCaw, Jordan Bell and Zaza Pachulia joined Curry in the starting lineup. Pachulia had nine rebounds, while Bell scored 12 points.
McCaw went down hard and headed to the locker room at the 10:24 mark of the first quarter. He returned to start the second, playing with a bruised lower back. Young went to the locker room late in the first half but was OK.
Curry overcame a slow start in his return, shooting 10 for 18. He had rolled the ankle at Atlanta on March 2 but initially kept playing before re-injuring it again.
RAPTORS 116, NETS 112
TORONTO (AP) — Kyle Lowry had 25 points, 12 assists and 10 rebounds in his 10th triple-double with Toronto, Jonas Valanciunas scored 23 points and the Raptors beat Brooklyn for their 12th straight victory over the Nets.
DeMar DeRozan scored 21 points, Fred VanVleet had 16 and Pascal Siakam 11 to help the Eastern Conference leaders bounce back from a loss at Cleveland on Wednesday night. The Raptors improved to an NBA-best 30-6 at home.
Brooklyn’s D’Angelo Russell had 18 points, 13 assists and 11 rebounds for his first career triple-double. Rondae Hollis-Jefferson and Allen Crabbe each scored 18 points, DeMarre Carroll had 14 and Jarrett Allen 13 for the Nets.
SPURS 124, JAZZ 120, OT
SAN ANTONIO (AP) — LaMarcus Aldridge had a career-high 45 points, helping San Antonio overcome Donovan Mitchell’s 35-point performance for Utah.
The Spurs won their sixth straight and beat the Jazz for the first time in four meetings this season.
Utah’s 12-game road winning streak came to an end, but only after Mitchell had 14 points in the fourth quarter, including three 3-pointers in the final two minutes to force overtime.
San Antonio remained sixth in the Western Conference with the same record as fifth-place New Orleans, a half-game behind Oklahoma City for fourth. Utah remained eighth in the West.
TIMBERWOLVES 108, KNICKS 104
NEW YORK (AP) — Karl-Anthony Towns had 24 points and 13 rebounds, and Minnesota beat New York to clinch its first winning record in 13 years.
Taj Gibson scored 18 points, and Andrew Wiggins added 17 points and 11 rebounds to help the Wolves improve to 42-31. They came into the night tied with Utah for seventh place in the Western Conference. Nemanja Bjelica also had 17 points.
The Timberwolves hadn’t finished with a winning record since going 44-38 in 2004-05, the season after their last playoff appearance. Minnesota is trying to end the NBA’s longest current postseason drought.
Tim Hardaway Jr. scored a career-high 39 points for the Knicks. They have dropped two in a row after winning two straight following a nine-game losing streak.
CAVALIERS 120, SUNS 95
CLEVELAND (AP) — LeBron James scored 27 points in three quarters, Kevin Love added 20 and Cleveland welcomed back three players from injury in a blowout victory over Phoenix.
James added nine assists and six rebounds before watching and cheering from the bench in the fourth while the Cavs rolled to an easy win with their healthiest roster in weeks. Forwards Tristan Thompson, Larry Nance Jr. and Rodney Hood all returned from injuries.
Phoenix was without its top two scorers, Devin Booker (right hand sprain) and T.J. Warren (left knee inflammation). But even they might not have been able to stop the Suns from losing their 10th in a row and 25th in 27 games. Troy Daniels scored 20 points, and Marquese Chriss had 19 to pace Phoenix.
CELTICS 105, TRAIL BLAZERS 100
PORTLAND, Ore. (AP) — Marcus Morris scored 30 points and short-handed Boston handed Portland its its second straight loss following a 13-game winning streak.
Terry Rozier added 16 points for the Celtics. They are second in the Eastern Conference behind Toronto but have had to deal with recent injuries to Kyrie Irving and Jaylen Brown.
Damian Lillard and CJ McCollum each had 26 points for the Blazers.
THUNDER 105, HEAT 99
OKLAHOMA CITY (AP) — Russell Westbrook scored 17 of his 29 points in the fourth quarter to help Oklahoma City beat Miami.
Westbrook went 6 for 7 from the field and made 3 of 4 free throws in the final period. He also finished with 13 rebounds and eight assists.
Steven Adams added 24 points and 12 rebounds for the Thunder. They have won seven of eight.
James Johnson scored 23 points, and Goran Dragic added 20 for the Heat.
BUCKS 118, BULLS 105
CHICAGO (AP) — Shabazz Muhammad scored 21 points and Milwaukee overcame a sluggish start to beat Chicago.
Milwaukee star swingman Giannis Antetokounmpo missed the game because of a sprained right ankle.
Former Bull Tony Snell added 18 points, and Brandon Jennings had 16 points and five assists to help the Bucks move within a half-game of seventh-place Miami in the Eastern Conference playoff race.
Denzel Valentine led Chicago with 20 points.
PACERS 109, CLIPPERS 104.
INDIANAPOLIS (AP) — Bojan Bogdanovic scored 28 points and Indiana used a late 9-0 run to hold off Los Angeles, putting the Pacers on the precipice of clinching a playoff spot.
The Pacers won for only the second time in five games, but can clinch a playoff berth with one more win or a Detroit loss. Lou Williams led Los Angeles with 27 points.
NUGGETS 108, WIZARDS 100
WASHINGTON (AP) — Nikola Jokic and Jamal Murray each scored 25 points and Denver beat Washington to keep its playoff hopes alive.
Bradley Beal led Washington with 24 points as it failed to gain ground in a competitive East.