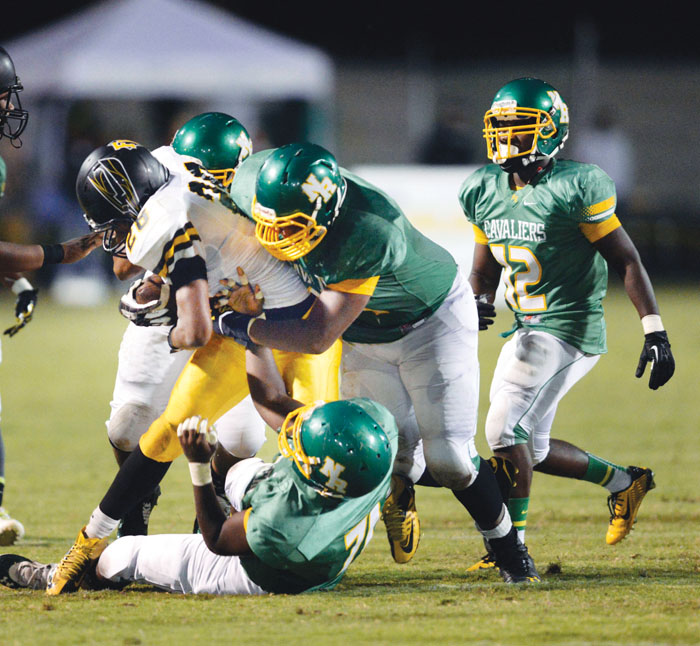 Wayne Hinshaw file photo/for the Salisbury Post ... During a game in October 2014, North Rowan’s Wesley Jefferies brings down Forest Hill’s Jayshawn McLaughlin, as the Cavaliers’ Terry Cathcart (on ground) assists. North won, 14-12. Jefferies has signed to play at the University of North Dakota.

SPENCER — Former North Rowan High star Wesley Jefferies is headed to Grand Forks, N.D., to continue his education and to play football for the Division I University of North Dakota Fighting Hawks.

It’s nearly 1,500 miles from his home to UND, but that will be a relatively short ride for Jefferies, who competed in the California community college circuit in 2016 and 2017. Jefferies played on the defensive line at Feather River College in northern California,  more than 2,600 miles away from Rowan County.

“The whole junior college experience is humbling,” Jefferies said. “But I know I’m a better person for it. I’m in better shape now and more mature now than when I was at North Rowan. I did a little bit of growing up in California. Being that far away from home was pretty hard, but not that hard. It helped me being out on my own like that.”

North Rowan coach Ben Hampton recalls that Jefferies didn’t play football as a freshman, but he proved a quick study as a sophomore. The kind of size Jefferies has (6-foot-5, 290 pounds) is unusual, and he had solid athleticism for someone so large. He was agile enough to play some basketball for the Cavaliers.

Jefferies blossomed into an outstanding interior defensive lineman as a junior and senior for the Cavaliers, racking up 51 tackles for loss in those two seasons and making all-county teams in 2013 and 2014. Playing in the 2A ranks, North Rowan was 24-4 in those two years and was ranked No. 1 in the state for much of 2013.

“Those teams Wesley played on (Joe Nixon was head coach, Hampton was offensive coordinator) had to be some of the best in North Rowan history,” Hampton said. “We had a lot of special kids then, and we had enough good players that we could two-platoon. We didn’t need Wesley to play offensive line as well as on defense, but he certainly could have. He was a dominant player for us and he’s always been a really great kid. He’s one of those guys you enjoy seeing when he comes back to North Rowan.”

While 99 percent of Jefferies’ experience has been on the defensive line, North Dakota envisions him as an offensive lineman. Physically, he should be able to make the transition. He’s got some quickness off the ball and very good strength. He runs surprisingly well. He’s also a high-energy guy who never gives up. He will compete and hustle right down to the whistle.

“I could see him being a really good offensive tackle for North Dakota,” Hampton said. “Or I could see him playing guard. He moves well enough to get out and pull.”

Jefferies’ time on the field at Feather River the last two seasons was up and down. He missed a month of action last fall with a concussion. Former North Rowan quarterback Alexis Archie, a Livingstone College signee, was also at Feather River and helped Jefferies deal with the ebbs and flows.

“My freshman year at Feather River was actually a lot better than my sophomore year,” Jefferies said. “But I can’t complain about how things worked out.”

The competition was good. Feather River played against some of the best in California, including nationally ranked American River College, which had 13 four-year college signees and sent a defensive lineman to USC.

Jefferies showed enough potential in games and on film that he was avidly recruited. You can’t teach guys to be 6-5, 290, especially when that 6-5, 290 is mobile.

Jefferies originally made a verbal commitment to Hampton University in Virginia, but when head coach Connell Maynor resigned last November, Jefferies started looking at other options that included a handful of Division I schools and a host of Division II programs.

“I just tried to be patient through the recruiting process and find the right place, the best fit,” Jefferies said. “North Dakota talked to me about playing on the offensive line for them, and I’m fine with that. I’ll do whatever they want me to do.”

North Dakota had some selling points. The school’s massive indoor practice facility is the envy of  just about every FCS program, there’s an avid fan base and a high-powered schedule.

North Dakota is bringing in a strong recruiting class. The Fighting Hawks signed 22 during the December signing period and added eight more recruits in February. Jefferies, obviously, might be the last addition to the class.

North Dakota opens the 2018 season at home with Mississippi Valley State (Jerry Rice’s alma mater) and then travels to Seattle to play the University of Washington in its second game.

Jefferies won’t have to make as much of a climate adjustment to North Dakota as you might think. Feather River is located in the small town of Quincy in the Sierra Nevada mountains where it’s cool or downright chilly during most of the football season. It’s not like Jefferies has been hanging out on the beach in L.A.

Jefferies, who lists Pittsburgh Steelers nose tackle Javon Hargrave  (North Rowan) and Cleveland Browns defensive end Chris Smith (West Rowan) as inspirational role models, will report to North Dakota in June for summer school and workouts. He’s excited, but he says his mother is even more thrilled than he is that he’s getting the chance to play Division I football.

“I’ve had some communications with Javon, and I understand what a great opportunity this is,” Jefferies said. “From where I was a few years ago to where I am now, it all feels like a dream.”