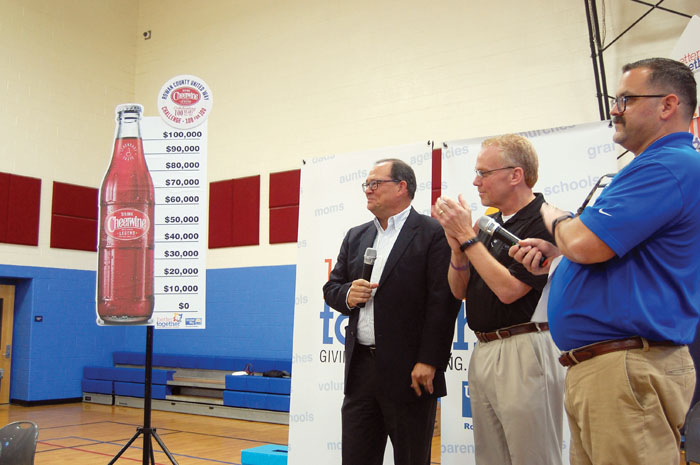 SALISBURY — Rowan County United Way leaders celebrated the success of a 2017 campaign that raised more than $1.5 million and looked toward the future and a new fundraising model.

Bill Burgin is the incoming president.

Special kudos went to Daimler Trucks and Cheerwine for their generosity in 2017. Lane Bailey, co-chairman of the drive along with Aaron Church, said the companies made the campaign successful.

Daimler gave a $100,000 corporate gift. Plant manager Henning Bruns said the Cleveland plant has a long history of supporting United Way, “and we will continue.”

Cheerwine gave a $100,000 challenge grant as part of the company’s centennial celebration in 2017. Cliff Ritchie, head of Cheerwine, said the company was born in Salisbury and proud to have a part in the United Way effort.

“It’s just nice to know, when we all work together, we’re at our best,” Ritchie said.

Awards and recipients given out were:

• Most Employee Spirit throughout the campaign: City of Salisbury

• Campaign Chairman’s Achievement Award: Innospec, for the second year in a row.

In recognition of the Service Above Self youth awards’ ongoing success, President Brien Lewis of Catawba College announced the school will offer three Service Above Self scholarships of $3,000, two for juniors or seniors and one for an eighth-grader.

Burgin said he knew he’d have plenty of back-up in the year ahead.

“I look out among you and I see angels, and I thank you so much for what you’ve done,” Burgin said.

Then he turned his attention toward 2018-2o, when the United Way’s new community impact model of fundraising will phased in.

“We hope by doing that, that we will be able tell our donors that their gifts have not simply helped people in the community in the short term but have actually changed their lives,” he said.

Also addressing the gathering was Executive Director Bob Lippard, who recently announced his resignation after 34 years of working with Rowan County United Way. “Your service as volunteers is remarkable,” Lippard said. “I am indebted to all of you. …

“I hope you will continue to be rewarded and blessed as you have blessed me.”