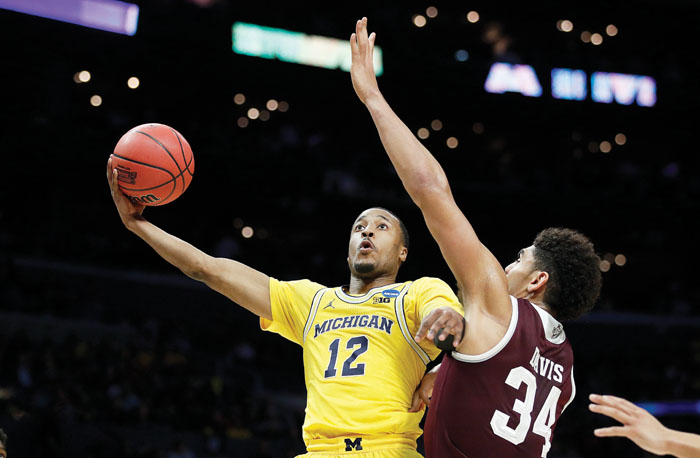 LOS ANGELES (AP) — Michigan took all the drama out of this NCAA Tournament victory, burying Texas A&M under a barrage of 3-point shots.

After reaching the round of 16 with an improbable buzzer-beater, the Wolverines shot 62 percent from the floor and routed the Aggies 99-72 in the West Region semifinals on Thursday night to advance to the Elite Eight for the third time in six years.

Next up the Wolverines will face either No. 4 Gonzaga or No. 9 Florida State who met in the second regional semifinal at Staples Center.

The Wolverines (31-7) dominated from start to finish, hitting 14 3-pointers — 10 in the first half when they led by 29 points — and extending their winning streak to 12 games.

“Felt like we ran into a buzz saw,” Aggies coach Billy Kennedy said. “It seemed like everything they shot went in.”

“My shot went in early and it gives you the confidence to take the next one,” Abdur-Rahkman said. “I think everyone had that confidence today.”

Abdur-Rahkman made four 3-pointers and both of his free throws, and had five rebounds and seven assists.

“It was kind of hard to see because I was just wondering when they were going to miss,” Aggies guard Admon Gilder said.

Michigan won its second-round game to reach the Sweet 16 on freshman Jordan Poole’s long 3 at the buzzer against Houston.

The Aggies (22-13) never made a run, going long stretches without a basket in the first half while Michigan was scoring on nearly every trip down the floor.

Having beaten defending national champion North Carolina by 21 points to get to Los Angeles, Texas A&M’s stay was short.

The Aggies have yet to reach an Elite Eight, and Michigan made sure they never had a chance.

Poole hit the Wolverines’ first 3-pointer two minutes into the game. During one stretch, they made 3s on three consecutive possessions that extended their lead to 25-10 and had the predominantly Michigan crowd chanting, “Let’s go Blue!”

“Everywhere we go we have a huge fan base and it feels like a home game,” said Wagner, a junior from Germany.

Wagner connected on all three of his 3-point attempts, the first one coming on Abdur-Rahkman’s kickout from the paint, one of 21 assists for the Wolverines.

“We’ve been playing within ourselves all year and not looking at the opponent too much,” Wagner said. “We’ve been believing all year we can beat anyone if we play our best basketball.”

Michigan led by 29 points after an 8-0 run near the end of the first half. The Wolverines averaged nine 3-pointers per game coming in and exceeded that by the break.

Michigan held the Aggies to 12-of-32 shooting from the floor by double-teaming A&M and getting hands in shooters’ faces.

The Wolverines had 12 steals in the game, led by Zavier Simpson with six.

The Aggies committed 10 of their 14 turnovers in the first half, including five by T.J. Starks.

They improved to 57 percent shooting in the second half, but it didn’t make any difference when the Aggies couldn’t come close to reducing their deficit.