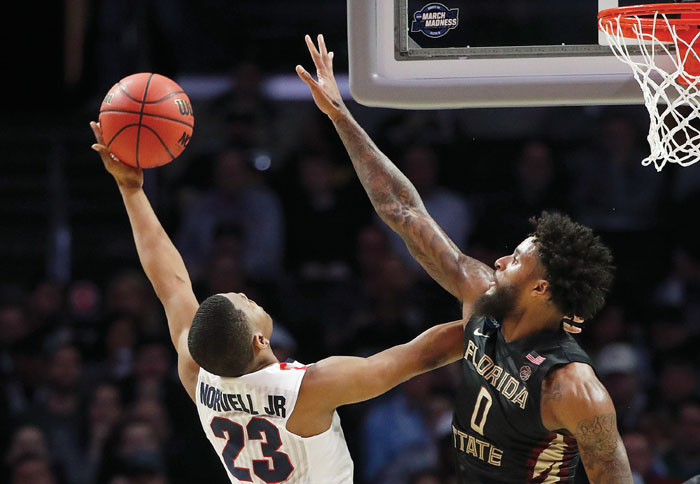 LOS ANGELES (AP) — Florida State’s upset run in the NCAA Tournament has stretched all the way to the brink of the Final Four.

Terance Mann scored 18 points and the ninth-seeded Seminoles advanced to the Elite Eight for just the third time in school history with a 75-60 victory over fourth-seeded Gonzaga on Thursday night in the West Region semifinal.

C.J. Walker and Braian Angola added nine points for the Seminoles (23-11), who knocked out a third straight higher-seeded opponent in a surprising run out West for a team that went 9-9 in ACC play and lost its conference tournament opener.

“It’s not any time to start celebrating right now,” Florida State coach Leonard Hamilton said. “These guys are working hard. We’ve worked hard all year. Not very many people think we have a chance to be where we are.”

Hamilton’s best postseason run in his 16 years at Florida State is extended to Saturday, when the Seminoles will face third-seeded Michigan for a trip to the Final Four in San Antonio. The Wolverines advanced with a 99-72 rout of Texas A&M.

Florida State followed up its stunning comeback against top-seeded Xavier last weekend with a steady, dominant second half against Gonzaga. The Seminoles jumped to a 13-point lead early in the second half and never let their margin dip below four, with Mann providing the biggest buckets along the way.

After a season of running away from West Coast Conference opponents, Gonzaga played from behind for much of the night at Staples Center, even trailing at halftime for only the sixth time all season.

The Zags fell behind by 13 early in the second half while the Seminoles defended the perimeter well and moved the ball fluidly. Florida State was even more dominant than usual around the rim, and Mann led a parade of scorers from all spots on the court.

Florida State: The Seminoles’ 11-man rotation, defensive energy and balanced scoring have all been a nightmare for three straight opponents. On both ends of the court, this is a prime example of a team coming into its best form at the perfect time in March.

Gonzaga: Foul trouble, poor outside shooting and sub-par ball movement all doomed the Zags, who didn’t rise to the March challenge as impressively as last season’s team did. That impressive run would have been hard to top, and they didn’t.

Tillie apparently has an injured hip, although the Zags had kept it quiet. The 6-foot-10 French sophomore typically provides interior defense and creates mismatches for Gonzaga while contributing to its balanced offense.