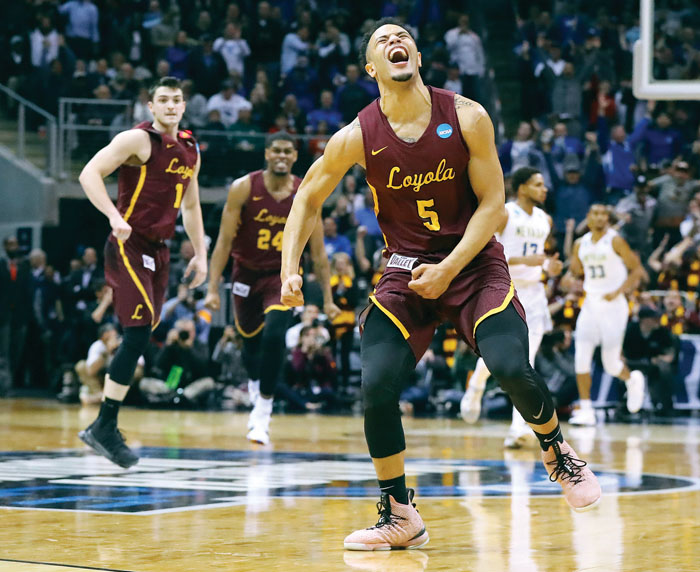 Not when Townes scored only a combined 15 points in Loyola’s first two NCAA Tournament games. Not even with Loyola’s improbable tournament run hanging in the balance Thursday night, Townes with the ball in front of the Loyola bench in the final seconds and the shot clock about to expire.

With Loyola clinging to a one-point lead and only 6.3 seconds remaining, Townes nailed the decisive 3-pointer to help clinch a 69-68 win over Nevada in the NCAA South Regional semifinal.

“He was a warrior,” Moser said.

Townes, who had 18 points, charged down the court, pumping his fist, following the shot.

“I’ll probably remember it for the rest of my life,” Townes said. “I mean, it doesn’t really get any better than that.”

Following a timeout, Nevada’s Caleb Martin answered with a 3, but this time the Wolf Pack couldn’t extend their string of second-half comebacks in the tournament.

“Got to give so much credit to Nevada, they never quit,” Moser said. “Those guys keep coming at you, coming at you. … I was blessed we made a couple of plays at the end, got a couple of stops.”

The win leaves the No. 11th-seeded Ramblers, the biggest surprise in a regional that has lost its top four seeds, one victory from a Final Four appearance. Loyola (31-5), which has won three tournament games by a combined four points, awaits the winner of the Kansas State-Kentucky game in Saturday’s regional final.

Not bad for a program that hadn’t been in the Sweet 16 in 33 years.

On a team that shares the spotlight, this was Townes’ moment. He made each of his two 3s and led Loyola with five assists. He said he was fine after banging knees with Nevada’s Jordan Caroline at the end of the game.

“I think Marques Townes is the best player on the court tonight,” said Loyola guard Clayton Custer. “I don’t even think it was close, either. … This is unbelievable. Feels like a dream.”

“We get a stop on the 3 they shot at the buzzer and maybe we’re sitting up here with a win,” said Nevada coach Eric Musselman.

“I should have denied the catch,” Martin said of Loyola’s pass to Townes. “I just got lost and it was costly.”

Loyola trailed by 12 points, at 20-8, midway through the first half but stormed back to lead 28-24 at halftime. Loyola closed the half with a 20-4 run as Nevada didn’t score in the final 7:55 before the break.

Loyola pushed the ball in the paint on almost every possession. The Ramblers’ first 10 points came on layups.

Loyola’s relentless attack on the basket continued as it stretched its lead, one layup at a time, in the second half.

Loyola: The Ramblers showed strong poise by sticking with their game plan to attack the basket, even when the Wolf Pack collected five blocks in the first half. Loyola took a 46-34 advantage in points in the paint.

Nevada: The Wolf Pack couldn’t keep pace with Loyola’s inside attack. They made only 8 of 27 3-pointers.

Four members of Loyola’s famous 1963 NCAA championship team had front-row seats: Jerry Harkness, Les Hunter, John Egan and Rich Rochelle. In the final minutes of the game, Harkness could be heard saying, “We need a stop. We just need a stop.”

Also attending the game was Sister Jean Dolores Schmidt, Loyola’s 98-year-old team chaplain who has become a celebrity during the tournament. “It was getting pretty bad. I thought I might have to resort to my nitro (nitroglycerin), but I didn’t have to do that,” she said after the win. She also had a word of caution for Loyola’s next opponent: “Here we come, next team, whoever you are.”

Nevada’s experience in second-half comebacks paid off. After Loyola’s layup by Custer gave the Ramblers their last 10-point lead at 57-47, the Wolf Pack charged back. Cody Martin’s basket started a 12-2 run, and his layup tied the game at 59-all with 4:06 remaining.

This time, however, Nevada couldn’t regain the lead.

Nevada: Despite losing four seniors, the Wolf Pack again will be a team to watch in the Mountain West. Among the top returning players will be the Martin twins, who are juniors.