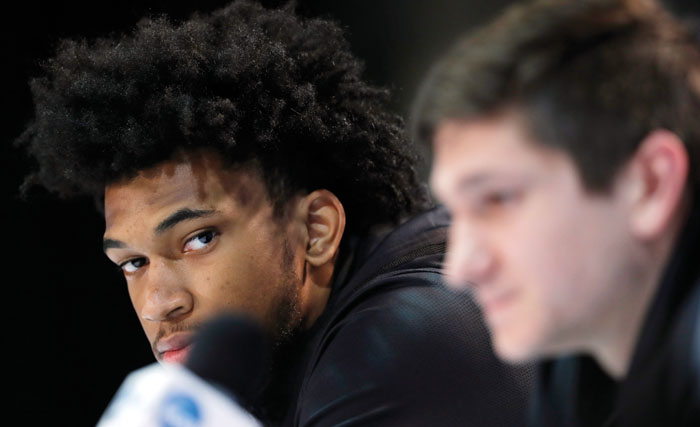 OMAHA, Neb. (AP) — Everything seems to be in place yet again for Kansas. For the second straight year, the Wildcats need just two wins — in a gym its rabid fans can reach in less than half a day’s drive — to reach the Final Four.

It didn’t work for the Jayhawks a year ago, though, and winning this year’s Midwest Region could be an even bigger challenge.

Top-seeded Kansas (29-7) faces fifth-seeded Clemson (25-9) on Friday night in a Sweet 16 matchup just 200 miles up the interstate from Allen Fieldhouse.  A year ago, the top-seeded Jayhawks lost to Oregon in nearby Kansas City in the Elite Eight. In 2016, Jayhawks were eliminated in the regional finals by eventual national champion Villanova in Louisville.

“One of the benefits of being seeded high is (that) you get an opportunity to possibly play close to home. And I don’t think it will have much to do with the outcome of this weekend, though,” Kansas coach Bill Self said. “I really believe that sometimes playing close to home can actually be a little bit more of a distraction or bring a little bit of pressure.”

The Jayhawks will face a red-hot Clemson team picked to finish 13th out of 14 teams in the ACC — a team that routed Auburn 84-53 last weekend in the third-biggest blowout by a lower-seeded team since 1979. The Tigers are playing in their first regional semifinal in 21 years, and as such have almost nothing to lose.

Kansas, a basketball school if there ever was one, has won 14 consecutive Big 12 titles — but it hasn’t reached the Final Four since 2012. Still, Self has been getting the most out of a team without as many sure-fire future pros as he usually has at his disposal.

“I’ve seen Bill (Self’s) teams from afar, because I’m a basketball junkie and I study everything,” Clemson coach Brad Brownell said. “But to watch him do what he’s doing with this group, (it’s an) unbelievable coaching job to take a different kind of team and to still win the conference.”

The nightcap will feature good friends Mike Krzyzewski and Jim Boeheim squaring off when second-seeded Duke faces ACC rival Syracuse, the No. 11 seed that has once again advanced deep into the tournament behind its lockdown defense.

The Blue Devils beat a good Rhode Island team 87-62 to reach its 26th regional. And although four of the top five scorers are freshmen, led by likely lottery pick Marvin Bagley III (21.2 points, 11.3 boards a game), they also have perhaps the most experienced player in the tournament in senior Grayson Allen.

Syracuse was the last team added to the tournament and has yet to look pretty this March, but that’s what the Orange does. The 55-53 victory over Michigan State showed that they might be re-discovering the magic that lifted them to the Final Four in 2016 as a No. 10 seed.

Duke easily handled Syracuse 60-44 in their only meeting back on Feb. 24.

The Tigers have reached the Sweet 16 behind a strong defense — and they hit their free throws. Clemson ranked third among ACC teams in allowing just 65.5 points a game and second from the line at 75.5 percent. The Tigers also spread the ball around, with four starters averaging at least 10 points a game led by junior guard Marcquise Reed (15.9 ppg.).

The Jayhawks are a guard-oriented bunch led by senior guard Devonte Graham, the Big 12 player of the year, and fellow senior wing Svi Mykhailiuk. Kansas has also gotten a major boost from sophomore Malik Newman, who averaged 24 points while leading the Jayhawks to their league tournament title. Newman leads KU with 19 points a game so far in the NCAA Tournament.

The Jayhawks lost some head scratchers this season, getting swept by Oklahoma State in the regular season and dropping back-to-back games to Arizona State and Washington.

The key to beating the Orange is to find ways to get enough open looks against their vaunted 2-3 zone. Syracuse is among the best defensive teams left playing — and arguably the worst offensive one. The Orange can’t afford to get behind early against Duke, which is one of the most efficient and explosive scoring teams in America.

“The key really for us against Duke is we have to play better than we’ve played down there and than we’ve played in this tournament,” Boeheim said. “I think we’re perfectly capable of playing better even though the record doesn’t look like that.”

The Blue Devils can kill teams from the perimeter, where they shoot 38.3 percent on 3s, or dump it in to Bagley for an easy bucket.  Despite its familiarity with Duke, Syracuse is the biggest underdog of the Sweet 16 for a reason.