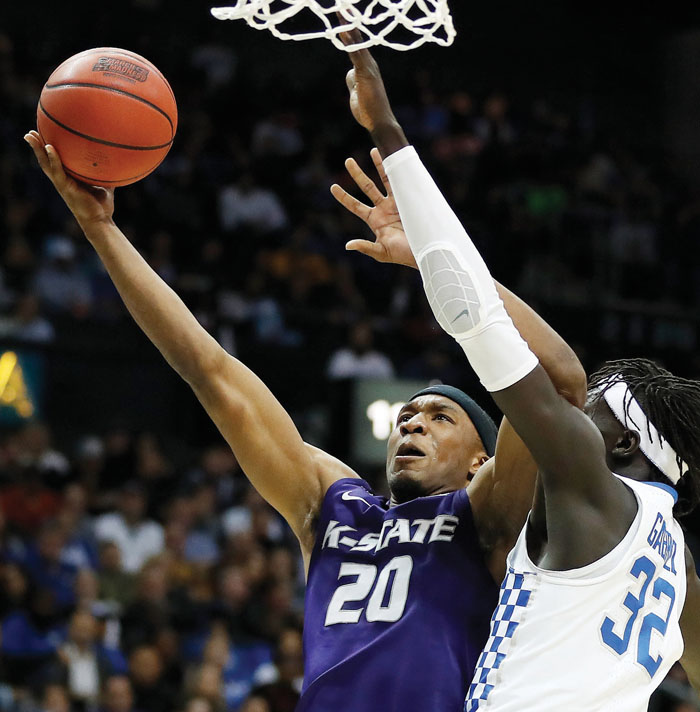 Gritty Kansas State made sure of that Thursday night.

Demeaned by many pundits as the worst team still alive in the NCAA Tournament, ninth-seeded K-State got 22 points from Xavier Sneed and gave the South Regional one more upset with a 61-58 semifinal victory over Kentucky.

Next up in the bracket-busting South: the regional final against No. 11 seed Loyola, which continued its stunning run in the tournament with a 69-68 victory over Nevada.

Yep, its 9 vs. 11 in the Elite Eight for the first time in tournament history with a trip to the Final Four on the line.

Just the way it should be in a regional that became the first in NCAA history to have the top four seeds knocked out on very first weekend, including No. 1-ranked Virginia.

Sneed wasn’t around at the end — he was among three Kansas State players who fouled out — but Barry Brown Jr. came through with the shot of the game to seat it for the Big 12 school.

Brown darted into the lane with the shot clock running down, seemingly blowing by every Kentucky player to get to the basket, and banked one in with 18 seconds remaining to put K-State up 60-58.

Kentucky’s Quade Green put up an airball from beyond the arc and Kansas State rebounded, drawing a foul that sent Amaad Wainright to the line for two free throws that could’ve sealed it. He made only one, giving Kentucky one more chance to force overtime.

Shai Gilgeous-Alexander got a decent look at the basket, but his shot rimmed out as the horn sounded.

Brown wasn’t done. In the raucous celebration, he leaped over the press table like Superman and sprinted into the arms of the purple-clad Kansas State fan section.

John Calipari was denied a shot at his fifth Final Four in nine seasons as Kentucky’s coach. Fears that his young players would “drink the poison” — the belief that they had an easy path to San Antonio thanks to all the upsets — turned out to be well founded.