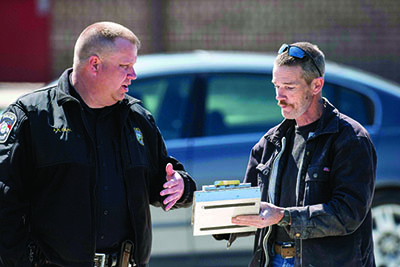 China Grove Police Chief Andrew Deal talks to a man outside South Rowan Animal Hospital. Law enforcement responded to a report of shots fired at the clinic on the north side of China Grove JON C. LAKEY / SALISBURY POST

CHINA GROVE — Police here are investigating an altercation early Friday afternoon in the parking lot of South Rowan Animal Hospital during which at least two warning shots were fired.

No one was seriously hurt, though a father working at the scene said his son, apparently the victim of the assault, “is scuffed up pretty good.”

The father said he retrieved his .45-caliber handgun from his work truck and fired twice into the ground bordering the parking lot to scare off two men who had his son on the ground.

The father and son were repairing ceramic tile inside the animal hospital, located on North Main Street. Police reportedly apprehended two suspects walking near the railroad tracks soon after the incident was called in.

Initial emergency dispatches — and the father of the victim — said one of the assailants had a gun.

Police also detained and handcuffed a woman at the scene of the fight. An officer said the China Grove Police Department would issue a statement later Friday.

The father said the situation was “an ex-boyfriend, new-boyfriend kind of thing.”