Carson shuts out East Rowan, behind White and Prugh 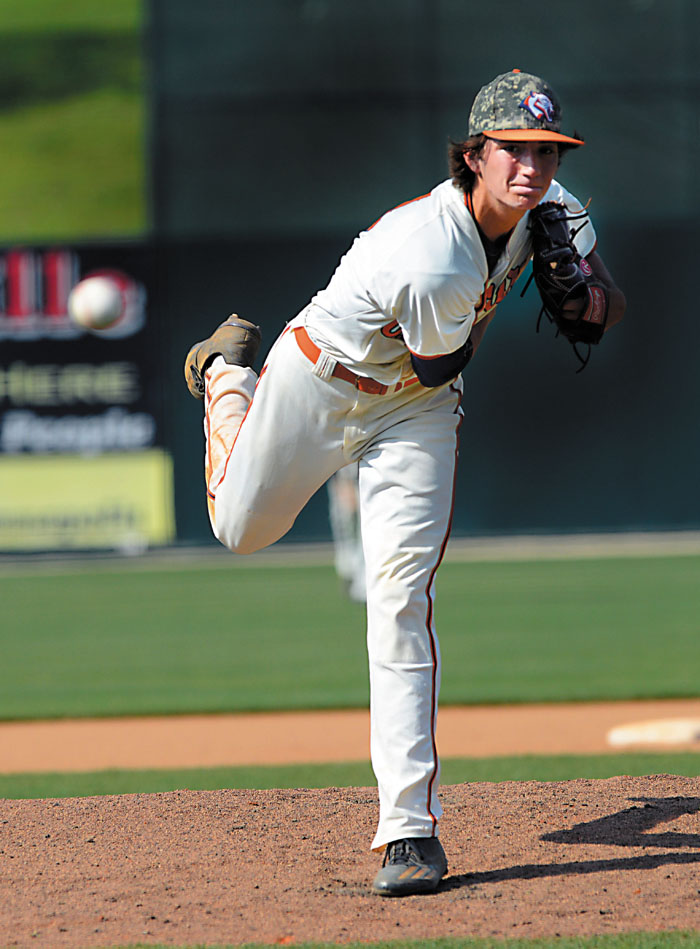 On what he considered an off-night, the Carson right-hander still dominated the way a rooster rules the barnyard — pitching six shutout innings and ringing up 11 batters in a 4-0 North Piedmont Conference victory.

“I feel like I didn’t have all my command,” White said. “I left a lot of balls up and was fighting my curveball. Our pitchers have been lights out this year, but I wasn’t tonight. I gave away too many baserunners.”

White needed 93 pitches — many of them low 90s fastballs witnessed by a cluster of pro scouts huddled behind home plate — to help Carson (7-3, 2-0) pocket its sixth consecutive win. He allowed only two hits and threw first-pitch strikes to 16 of the 24 hitters he faced. East (5-3, 1-1) put six runners on base against him, including three on walks.

“Owen pitched well, but they dictated a little how he pitched because they were so dead-red ready for that fastball,” said winning coach Chris Cauble. “He actually pitched tonight. He had to mix things up.”

Carson catcher Garrett Alewine acknowledged that it wasn’t vintage White, but it was certainly impressive.

“He did what every great pitcher does,” Alewine said. “He hit his spots and located when he needed to. He was just O.”

The tough-luck losing pitcher was East freshman Jake Hunter, a right-hander who struck out eight, walked none and yielded three earned runs in six innings. He surrendered a two-run home run to White in the top of the first and solo blast to slugger Luke Barringer in the fourth.

“I was really proud of him,” Mustangs’ coach Brian Hightower said after Hunter allowed five hits. “He made a couple of mistakes that he can’t afford to make. But he’s just a freshman and I’ve been watching him pitch since he was eight (years old) and I know that he’s going to be in these ballgames for the next four years. We went ahead and got him acclimated tonight.”

Hunter’s first mistake came when White — the third batter he dealt with — assaulted a first-pitch curve and drove it over the fence in left field to open the scoring.

“I left it up,” Hunter said, after delivering 84 pitches in his second varsity start. “He put a pretty good swing on it. Their hitters were bigger and stronger than what I’m used to.”

White called the pitch “a hanging curveball,” and said he expected something off-speed.

“I was sitting curveball,” he noted. “Most pitchers are going to try to throw a first-pitch strike and that’s his best pitch. I got lucky and did what I could with it.”

East sent only 10 batters to the plate through the first three innings before making some noise in the last of the fourth. White uncharacteristically walked both Trevor Scruggs and Wayne Mize before escaping unscathed by fanning Hunter on a 3-2 changeup.

“It started out three-and-oh,” said Hunter. “First I took a good one. Then he came back with two changeups that I wasn’t expecting. It’s just hard to hit against a guy who throws that hard and has good movement.”

Barringer opened the fourth inning by jerking a first-pitch fastball down the left-field line and over the fence. Carson’s final run came moments later when Maddux Holshouser crossed on Alewine’s sacrifice fly. East’s first hit was produced by Corbin Moss, who measured an 0-2 changeup and lined it into the left-field corner for a fifth-inning double.

“It was a good pitch,” Alewine insisted. “It was a better hit.”

East didn’t put a runner on third base until the bottom of the seventh. Facing reliever Cam Prugh, Matthew Mathis stroked a double to left and advanced on a one-out wild pitch. Prugh wriggled out of the jam by striking out Hayden Setzer and Scruggs to end the game.

“They weren’t done yet,” Cauble said. “I was glad to see Prugh come in and close it out. East is a good team. That’s why this was such an awesome win.”