Wayne Hinshaw: There is a moon out tonight 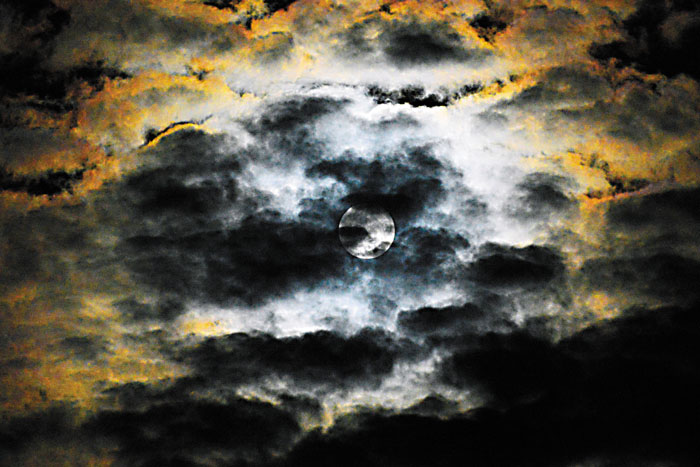 Looking at the moon through the moving clouds as the fog clears as one of the recent storm front moves out of the area. Wayne Hinshaw/for the Salisbury Post

On a recent night, following several days of fog, clouds and rain, the sky began clearing and the moon played the old children’s game of “peek-a-boo” with the black clouds. The wind was very strong, making the clouds speed across the sky, first covering and then uncovering the brightness of the moon.

I was fascinated, maybe hypnotized, for about an hour just watching the nighttime sky show jetting pass overhead.

With camera at my eye, I kept trying to dodge the clouds and photograph the moon when it appeared. Shooting was much like photographing a fast-moving soccer game when you focus on a player and track him until the action you expect happens for the photo. Sometimes, of course, the soccer action does not happen as expected, just like the moon not appearing through the clouds as anticipated.

I had considerable success tracking the moon’s race with the clouds.

When the moon was at full brightness, the exposure was difficult with the “brightness to darkness range” being too much to show the cloud formations that were much darker. I had to capture the moon when the clouds partly filtered the bright moon light to capture both moon and clouds.

On this night, the sky looked much like the artist painter’s concept of the earth at the time of creation with much chaos and stirring, almost like the sky was boiling with bubbles of cloud and light. Surprisingly, there were traces of yellowish-red light appearing at times. Something in the atmosphere was acting like a color filter.

When photographing the moon, you always use the “daylight” setting on your digital camera for correct color or white balance. Remember, the moon is like a giant mirror reflecting the sun. The sun is “daylight,” and moon’s white grayish surface reflects perfectly the daylight from the sun.

Often, the atmosphere, filled with dust, moisture or pollution, can add color that is different from the reflected daylight of the sun.

The moon is alway a mystery to mankind. It has always been associated with magic or love and many mythological stories through the ages. Some writers called the moon female, and some male. The Native Americans thought the sun was a great chieftain and his wife, the moon. The stars were their children.

The moon does control our ocean tides, so there is line of thinking that the moon causes disasters, like earthquakes. Some believed that when man walked on the moon, the world might end or cause storms on earth. There was a theory that the moon was made of old green cheese. Maybe that idea came from looking directly at the moon too long, causing insanity.

The moon has been called many names like winter moon, trapper, fish, planters, milk, rose, summer, dog days, harvest hunter’s beaver, and Christmas moon for the months of the year.

William Shakespeare reportedly mentioned the moon 171 times in his works.

The idea of a “honeymoon” is based on the full moon cycle. Between planting in the month of June and the fall harvest is the best time for a honeymoon, based on a farmer’s schedule.

The words “moonstruck” and “lunatic” come from the idea that full moons cause mental illnesses.

That old moon, of rock and dust, had been romanticized. Writers like to explore the mysteries of the moon, of ghosts, werewolves ( the 1941 movie “The Wolf Man”), and other tales of the nightly drama from above. The moon is certainly the source of fear and wonder to mankind.

At any rate, we can enjoy such songs about the moon as “There’s a Moon Out Tonight,” “Blue Moon,” “Moondance,” “Fly Me to the Moon,” “Moon River,” “Kentucky Moon,” and “By the Light of the Silv’ry Moon.”

What would we have to discuss without the moon?