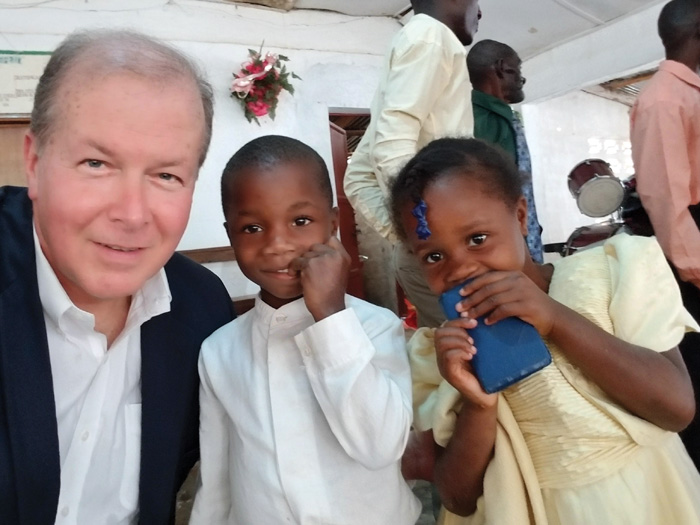 Banks Kluttz with a pair of Haitian children after a church service. The girl at right is holding a small Bible. Submitted photo

SALISBURY — If you’ve run into Banks Kluttz over the past several days, you know he’s excited about one thing — Haiti.

Kluttz has just returned from his personal fact-finding journey to this small country in the West Indies. He has talked so enthusiastically about the students, teachers, principals and others he met there that his brother, Jonathan Kluttz, says now he wants to go.

Traveling with brother-in-law Jonathan Page, executive director of Haiti Missions on the United States side, Banks Kluttz spent six days in northern Haiti in an area around La Victoire.

The 63-year-old Kluttz, returning to his first serious mission work in some 20 years, fell in love with the children and came back to the States ready to do what he can to support the new Haiti Missions model.

Kluttz choked up when he remembered a conversation he had — aided by an interpreter — with one of the school principals. After Kluttz learned that teachers and principal hadn’t been paid in more than six months, he asked the principal why he kept coming to work.

The principal answered, “You tell me what day I tell the students, ‘I won’t be back tomorrow.'”

Haiti Missions started in this northern region with D.B. and Polly Schoolcraft and their daughter, Carol. They established a mission station in La Victoire and lived with the Haitian people as they built a ministry.

D.B. Schoolcraft fell from a roof and died while building a mission compound structure in 1970. The Haiti Missions work passed on to Dr. John Page and his wife, Virginia, who had served on the organization’s first board.

Pastor Fortune Joseph led efforts on the Haitian side and became director of the national board. Over time, the organization became less missionary-driven and more national-driven.

This past year saw new leadership take over with Haiti Missions. Joseph had died, and Pastor Alexis Jean-Baptiste became the new national director.

Meanwhile, the late Page’s son, Jonathan, became Jean-Baptiste’s new counterpart in the States. Page has a doctorate in psychology and lives in Lawrence, Kansas.

When Page asked Kluttz to join his efforts in helping to raise awareness and money for Haiti Missions, Kluttz wanted more information. Kluttz is one of the principals in Rowan County’s longstanding Kluttz Piano Co.

Kluttz said before he started asking foundations, churches, corporations and individuals for financial assistance, he wanted to talk with the seven members of the national board in Haiti. He also sought to visit the schools.

“I wanted to make sure there was a clear trail of dollars,” Kluttz said, looking for assurances that $1 given would translate to $1 spent for food, clothing, school supplies, buildings, infrastructure and the like.

Haiti Missions is an all-volunteer, nonprofit organization. Kluttz’ previous mission work had included three months in Ethiopia and a year in Bolivia.

“I think I missed a lot of that,” Kluttz said, looking back. And he can’t overlook the fact he is 63.

“I’d like to end up my life strongly and do something that makes a difference,” he said.

Kluttz and Page called their six-day visit to Haiti “a vision trip.” Kluttz said he wasn’t there to build structures, but his visits to the various school campuses and meetings with the people built relationships instead.

The national board for Haiti Missions consists of five men and two women. Kluttz asked their input on how he could best help the organization. Kluttz said he learned a few Creole phrases — or thought he did — and they proved to give the Haitians some good laughs.

Another item on Kluttz’s personal checklist was to meet students, and he found that to be the most rewarding aspect of his trip.

“I’ll tell you, when I looked at their faces and Jonathan Page said their hope is to make a better Haiti through education,” Kluttz said, he was sold on what the organization was doing. He learned the students are tested regularly, and their scores rank among the best in the country.

But they are going to schools with dirt floors and poor supplies. Their teachers aren’t always being paid. Five of the seven schools have feeding programs. The daily meals, cooked over an open fire, usually consist of rice, beans and sauce. Once a week, they get a protein.

Kluttz learned it was sardines.

One of the schools had no water.

Kluttz and Page came back to the States bursting with concepts on how Haitians could better use agriculture, animal husbandry and vocational skills to create sustaining jobs.

“We have ideas running around our heads,” Kluttz said. “In fact, I’m about to lose my mind.”

Feeding the body means Haiti Missions wants to do more in providing lunches to students, safe drinking water for all and uniforms for every student. But that’s scratching the surface.

“It just goes on and on, and you just have to start,” Kluttz said.

He was struck by the beautiful, mountainous terrain of Haiti and the pride and dignity of its people, who have long dealt with natural disasters and conflicts.

Kluttz thinks some hope for Haiti lies with natives who left for better lives in the United States or elsewhere but now want to return and help. One such person Kluttz met was Caleb Joseph — Fortune Joseph’s son — who plans to return to Haiti for good in three years after his high school teaching career in Coral Springs, Florida, is over.

Kluttz found what he was looking for in Haiti. He hopes to return this summer with his son and daughter.

“It will change your life,” he said.

For more information on Haiti Missions, go to www.haitimisyon.com. It also has a Facebook page. Contact Mark Wineka at 704-797-4263 or mark.wineka@salisburypost.com.