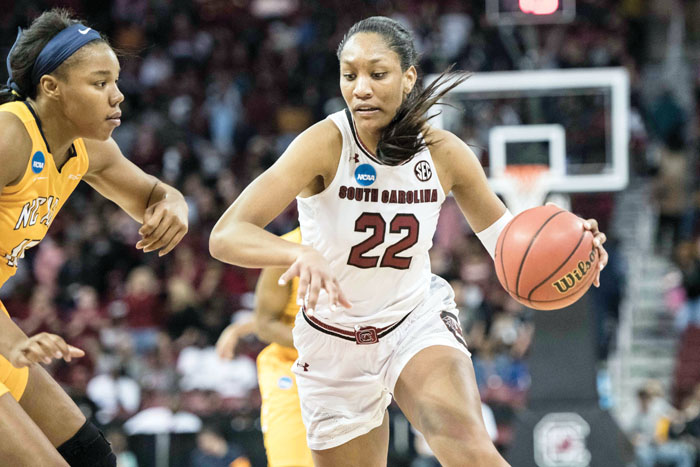 COLUMBIA (AP) — South Carolina coach Dawn Staley was relieved that her young Gamecocks made it through two up-and-down NCAA Tournament performances to reach the Sweet 16.

That relief quickly turned to work.

Staley has spent the past three days trying to ensure the letdowns won’t continue in the next round in Albany, New York.

The second-seeded Gamecocks (28-6) play Saturday against the regional’s surprise team in 11th-seeded Buffalo (29-5), which has eliminated sixth seeded South Florida and third seeded Florida State. Staley does not want to be Buffalo’s third upset victim and has worked to correct the mistakes in wins over North Carolina A&T and Virginia this past weekend.

“I just think we’ve got to take better care of the ball,” Staley said Wednesday. “I think it’s going to come down to the team that can make plays outside of rhythm plays, the ones you set up and diagram. So the intangibles are going to be key, making sure we’re locked in to getting loose balls, understanding what we need to do and that we don’t have any large mental breaks.”

The mental breaks were apparent for the defending national champs in Friday’s opener when the Aggies cut a 20-point lead to seven in the fourth quarter before the Gamecocks held on for a 63-52 victory.

Things were a little crisper in Sunday night’s 66-56 win over the Cavaliers, although probably not as sharp as South Carolina will need to be to make a third Final Four in four seasons.

Gamecocks forward A’ja Wilson pledged after the North Carolina A&T win that things would improve. She said the Gamecocks are in the process of making that happen by focusing on execution — crisp passes, strong footwork and lockdown defense.

It was a formula South Carolina used to capture the crown a year ago and one Wilson said could serve them well this year, too, as they continue advancing.

“We’ve got to focus on us and if we have an understanding of what we need to get done, it makes it easier on us when we get out there to play whoever we’ve got to play,” Wilson said.

Wilson, the three-time Southeastern Conference player of the year and the favorite for several national awards, understands that while many me be looking past the Sweet 16 match to a potential round of eight showdown with overall No. 1 seed UConn.

Staley gets upset whenever someone suggests if not for Mississippi State’s stunning upset of the Huskies in last year’s national semifinals, the Gamecocks would’ve had an impossible time handling UConn in the finals. Instead, South Carolina topped Mississippi State for a third time that season to win the title.

“We’ll focus on who’s in front of us,” Wilson said.

The deeper the Gamecocks go, the more experience South Carolina’s younger players — half of the 12-person roster were not part of the NCAA title run a year ago — get in the NCAAs and the more prepared they’ll be in bigger moments, Staley said.

“I think the most important thing is to advance,” she said. “I think this team has played close games all season long. This team has made adjustments on the fly and I think we’ve just got to play.”

The most troubling part of the weekend for Staley was Friday night when South Carolina had 19 turnovers against North Carolina A&T. The Gamecocks cut that down to 10 in the Virginia win, four of those however by point guard Tyasha Harris.

“That’s something I’ve worked on and I know will have improve,” said Harris, a freshman starter on last year’s NCAA Tournament winner.

Wilson also knows she’s got to step up. While she had 44 points in the two wins and shot 14 of 32, a drop from her nearly 55 percent average coming in.

“Even though they’re saying we’re not playing our best, we’re still in it,” Wilson said. “Just to have the opportunity to still be dancing, no matter where we’re dancing, it’s a blessing.”