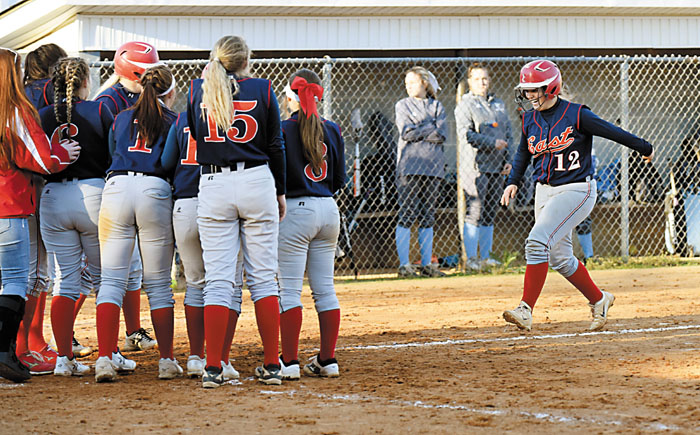 GRANITE QUARRY — The bill was due — and no one knew it better than Victoria Lewis.

East Rowan’s sophomore first-baseman had already squandered a couple of scoring opportunities when she came to bat in the bottom of the fifth inning of Thursday’s North Piedmont Conference opener against visiting West Rowan.

“I was already frustrated with myself,” said Lewis. “I was tired of hitting bloopers everywhere and getting out and leaving girls on base. I was ready to get up there and hit the ball hard.”

Did she ever. With two outs and the bases loaded, Lewis drilled a 3-2 pitch from Hannah Roberts over the fence in left field, snapping a 3-3 tie and helping the Mustangs gain a 7-5 victory.

“Couldn’t have come at a better time,” winning coach Mike Waddell said, after East (7-2, 1-0) overcame a 3-1, third-inning deficit and won its sixth consecutive game. “It was a huge momentum-changer.”

West (5-3, 0-1) suffered its third straight loss despite collecting 13 hits — including a pair of home runs by Mary Sobataka. Roberts surrendered four earned runs and seven hits in 4 2/3 innings and was tagged with the loss.

“We hit a lot of balls hard. They just made all the defensive plays,” said West coach Jimmy Greene. “What killed us is what’s been our problem the last couple games — our defense. We had four errors and at least two big mental errors that don’t show up in the book. We’re mentally off. We’ve got a good team but we’re all on our ears right now.”

They were mentally on after Sobataka connected for a three-run homer against winning pitcher Karley Teague in the top of the third. “Just trying to do my job,” the junior shortstop said, after smacking a 2-2 pitch over the center field fence. “This time, it ended up being a home run.”

East tied the score in the last of the third when both Caroline Johnson and Kaitlyn Samples delivered run-scoring hits with two outs. Johnson whipped a single into right field that plated leadoff batter Maddie Trexler and Samples drove a screeching double to the gap in right-center.

“I just wanted to put the ball in play — and not on the infield,” said Samples, a sophomore who made two highlight-reel catches in left field. “That pitch was right on the outside corner and I love it outside.”

East was still feeling the love in the top of the fourth when Samples sensationally gloved a line drive off Roberts’ bat, robbing her of at least a two-base hit.

“She’s a strong hitter, so I was playing a little deeper to begin with,” Samples said. “I got a good jump on it, saw it right off the back and started back right away.”

“I had to get myself into a zone where I see myself making good contact,” she said. “And I got my specific pitch — high, kind of outside. That’s always been my favorite.”

By the seventh inning, West had inched within 7-5 on an RBI-single by Taylor Walton and Sobataka’s second home run of the day. The game concluded with another web gem by Samples in left. With two runners aboard and one out, Roberts sent a missile toward left-center. Samples read it, drifted toward the gap and stretched for a backhanded catch. She relayed the ball to second-baseman Izzy Schroeder — who rifled a throw to Lewis to double off West’s Allison Ennis, completing a game-ending twin-killing.

“West is a very good team with a reputation to uphold,” Lewis said. “But this proves we’re out here to play and we’re coming.”

NOTES: West’s Alexandra Linder had three hits and reached base four times. … Sobataka and Lewis both have three home runs this season. … Teague allowed at least one hit in every inning and still improved to 4-1. … Both teams play conference home games today. West takes on South Iredell and East entertains Carson.