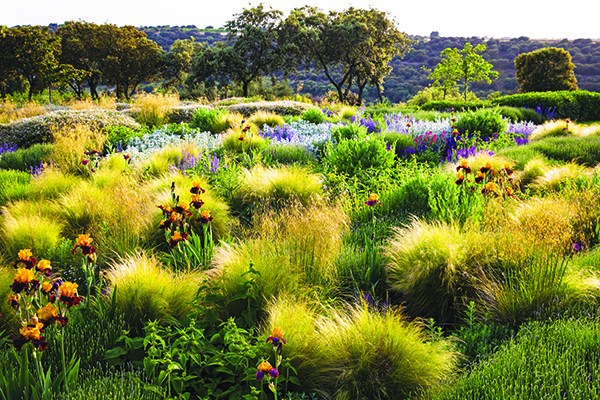 New gardening books still come thick and fast in the digital age. The titles tend to flock to topics that interest millennials and embrace such matters as caring for succulents and houseplants, growing edibles in urban spaces, and planting gardens as ecological oases.

What you don’t see so much anymore are photo-rich books that luxuriate in the images of top-tier private gardens. Such collections of personal Edens go wrong when they present trophy gardens built for wealthy people who don’t know their hummus from their humus.

Claire Takacs is a garden photographer who understands this. Based in Australia and Britain, she has had the enviable task of photographing some of the finest private gardens on four continents. Sixty-nine are presented in her new book, “Dreamscapes: Inspiration and Beauty in Gardens Near and Far.” Although I don’t warm to every one of the featured spaces, they all are driven by the passions and skills of their owners, or of gardeners loyal to the original owner’s ambitions, and that makes Takacs’s book worthy of our attention.

Through her work, Takacs has a rare global perspective on the state of garden-making in the early 21st century. The viewer is drawn to the common elements that bind our contemporary ambitions. As a rule, gardens everywhere are looser and more natural than ever. Perhaps because I love the extravagant use of perennials and grasses, I found myself drawn to gardens where the so-called New Perennial Movement, with its emphasis on using the right plant in the right spot, is fully expressed.

These gardens may be physically a world apart, but in their artful use of herbaceous plants, they are kindred spirits. At the grand neoclassical estate in Scotland named Hopetoun House, the owner has turned the old walled vegetable garden into a frothy incoming tide of perennials and grasses, including such beauties as Mexican feather grass, astilbes, echinops, echinaceas and joe-pye weed. (Those I discern from the pictures; readers may be frustrated by the lack of plant identification in the text.)

At Bryan’s Ground, a property in western England, David Wheeler and Simon Dorrell have softened the formality of an Arts and Crafts garden with mowed paths through meadowlike beds, including blocks of 20,000 blue Siberian irises.

Like many garden photographers, Takacs likes to take pictures when the sun is low in the sky, at dawn and dusk. This is when the flower heads of grasses, in particular, catch the light.

Collectively, her images demonstrate just how important grasses have become in bringing life and sparkle to a garden. The gardens devoid of grasses seem duller for their absence, with the exception of those Takacs photographed in Japan, which have a separate quality about them.

I asked Takacs, via email, whether gardens were becoming globalized to the point of homogeneity. The answer was an emphatic no.

“Gardens to me are often works of art, so they are as a result and at best a reflection of the people who made them,” she wrote. “This is why they are unique and special, regardless of whether they are using a similar planting style or plant palette.” And, she points out, the quality of the light varies so much by locale.

“I see great beauty in all of them, and I use light to attempt to show them at their most beautiful,” she wrote. “It’s my greatest reward when a garden owner says I see what they see.”