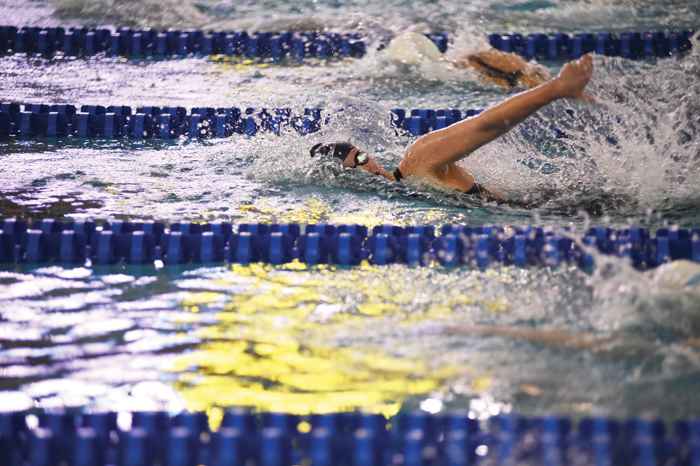 CHARLOTTE — The first 50 yards of the 200-yard butterfly were completed in Greensboro last Friday, and Queens University of Charlotte senior McKenzie Stevens, the favorite, was in third place.

“I was confident coming into the event, I had the fastest time, but I had been watching the other girls some,” Stevens said. “I knew some of them were going to go out really fast in that first 50.  I just wanted to stay in it, to stay close, and then I could make a move in the second half of the race.”

Stevens, who graduated from Salisbury High in 2014, didn’t panic, stayed steady and patient. At the 100-yard mark, she had moved up to second.

After the third 50-yard interval, Stevens was in first place, with about half of her 5-foot-4 frame finally nudging in front of the pacesetter, Simon Fraser University sophomore Jessie Gibson. Stevens had turned in a very aggressive third 50, and the only question left was would she have enough left to finish strong.

That last 50 yards, about 30 seconds of her life, Stevens saw just about everything flash before her eyes. From her first swimming lesson at age 3 or 4 with future Salisbury High coach Ryan Starrett, to rising and shining for countless 5:30 a.m. practices over the years, to competing as an All-American at a national level.

“A lot went through my head those last 50 yards, and I kept reminding myself of all of it,” Stevens said. “All the work, all the goals, and now this was it. Fifty more yards.”

Stevens had plenty left for that last 50. She won by more than a second in 1:56.89, a record for Division II swimmers.

“I realized I was in first place, and then I knew I had a chance for a record,” Stevens said. “I wanted to put it out there as much as I possibly could. Maybe it will last a little while.”

Stevens had been part of relay national championship relay teams for Queens, but this was her elusive first individual national title. It meant a lot. She’d been close before. On Thursday, the second day of the four day meet, she’s been edged in the 200-yard freestyle by four hundreths of a second. It was so close that Starrett thought she’d won.

“I really thought she had,” Starrett said. “But the computer said otherwise.”

Stevens graduated from Salisbury a few months after winning a state championship in the 500 freestyle.  She could have joined a lot of Division I programs, but she chose D-II Queens and coach Jeff Dugdale. Queens was close, and Stevens felt comfortable at the small school in Charlotte.

“At first, I think everyone who competes wants to go to a big school,” Stevens said. “But looking back on everything after four years at Queens, this is where I was  always meant to be.”

Stevens has been part of an amazing run by the Royals — four straight national championships by both the men’s and women’s programs. Queens won 17 events at this year’s nationals and set seven Division II records.

“The coaches at Queens have done tremendous things with her,” Starrett said. “I can remember her winning that state championship at Salisbury, but she was in some tears, in some pain. They’ve done a lot to refine her strokes and make them more efficient.  They’ve tweaked a lot of little things and helped her drop unheard-of times in some of her events.  Like her flip turn, it’s incredible now. She makes up time with it now instead of losing time.”

Heading into her senior season, her last go-round with competitive swimming, Stevens was looked to for leadership as well as great results, and she’s responded.

Queens competes against Division I programs during the season, and Stevens excelled. She had victories in meets against Duke and against Virginia Tech to take swimmer of the week awards.

In the Bluegrass Mountain Conference Championships in February, Stevens led Queens to its fourth straight league championship. She was in four events and won all four — 800 free relay, 200 IM, 200 freestyle and 200 butterfly. She set a D-II record in the 200 butterfly that she would smash in the nationals.

“She has one of the most beautiful butterfly strokes that I’ve ever seen,” Starrett said.

The surprise in the conference meet by Stevens was winning the 200 IM, an event that includes all four strokes — butterfly, backstroke, breaststroke and freestyle. Stevens had surgery as a youngster that made the breaststroke difficult for her. She hadn’t tried it seriously since the sixth grade, but she handled the stroke for 50 yards whenever she swam the 200 IM.

“We decided to try it this year, and while I wasn’t great at it, I did the breaststroke well enough,” Stevens said. “It was an unbelievable experience to be named the conference swimmer of the year. You pretty much have to win everything.”

This year’s national championships were special for Stevens and Queens, as they were held close to home at the Greensboro Aquatic Center.

“It was nice to be on the road for an hour and a half instead of riding 11 hours to Indianapolis,” Stevens said. “It meant a lot more family and friends were able to come see me. Ryan Starrett was able to be there. My sister (Garrison) flew in to see me, and that meant a lot because she’s the one who really got me started in swimming.”

Starrett had planned to watch Stevens swim in Salisbury against Catawba in December, but his son was born two days before that meet. But he got to make the trip to Greensboro to cheer her on.

Stevens had a fantastic meet.

On Thursday, she swam on the winning 400 medley relay team, in addition to her runner-up finish in the 200 freestyle.

On Saturday,  her last day of competitive swimming, she was sixth in the 100 freestyle.

Her final event was leading off Saturday night’s 400 free relay for the Royals, and Queens won the event by the narrowest of margins over rival Drury. Stevens earned her sixth All-America honor of the meet and the 17th accolade of her career.

“It meant a lot for us to win my last swim, and it was wonderful to win that last relay with my teammates and friends,” Stevens said. “I’m proud of  all the individual awards, but much prouder of what we accomplished as a team for four years. It’s the team that makes all that hard work so worthwhile.”

“She’s always had a lot of endurance,” Starrett said. “And she was always one of those people who could see the endgame. She would put in the work because she could see where that work would take her. Not everyone can do that.”

The next step for Stevens, who has been a great student, will be physical therapy school at Western Carolina University. She said her swimming accomplishments enhanced her application.

And now she can look back on a lot of dreams accomplished and a lot of goals fulfilled.

“I did set a lot of high goals, personal goals and team goals, for my last season, and I couldn’t be happier about the way things turned out,” the 22-year-old Stevens said. “I’ll miss swimming  a lot. It’s been such a big part of my life for so long.”

But life will go on.