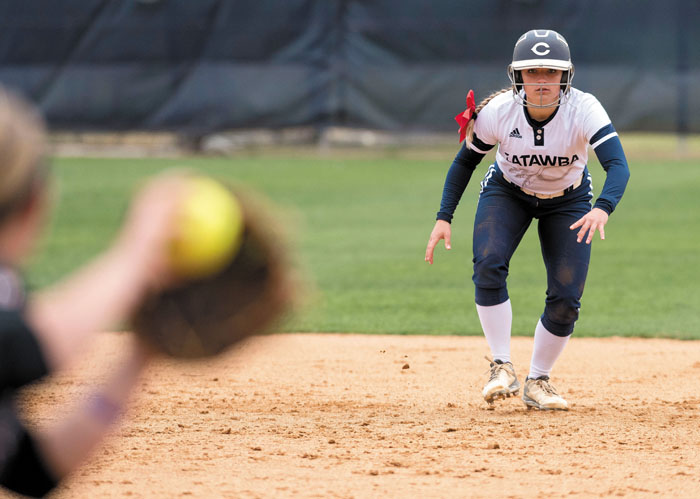 SALISBURY — Statistically, most doubleheaders are splits.

There are good splits and there are bad splits.  Catawba’s softball team produced one of those good splits on Thursday, breaking even against a Lenoir-Rhyne team that came to Whitley Field ranked 22nd in Division II, undefeated in the South Atlantic Conference and sporting a terrific overall record.

Lenoir-Rhyne (26-5, 3-1) was picked second in the SAC preseason poll and received four first-place votes from the league’s coaches. Catawba was picked 11th in the 11-team league.

Lenoir-Rhyne managed to pull out a 2-1 victory in the first game thanks to one clutch swing — a huge, two-run double by Kylee Leonhardt with two outs and two strikes. Catawba had baserunners thrown out at third and at home late in that game, so the Indians weren’t far from the sweep.

Catawba opened SAC play at Lincoln Memorial last weekend against another team with a nice record and came close to a sweep there, as well,  dropping the second game in extra innings on a walk-off homer.

Catawba suffered through a disastrous 11-40 season a year ago, but coach Nan Whitley’s team has turned things around with deeper, healthier pitching and the addition of talented players who have boosted the defense.

Catawba is hitting somewhat better than it did last season, but the major improvement has been in run prevention. The staff ERA was 5.20 a year ago. It’s 3.41 so far this year, with Hunter, Brooke Walser and Preston Ellenberg all throwing well. Opposing hitters batted a robust .326 against Catawba hurlers in 2017. This year, opponents are batting .251. Catawba also made 31 more errors than opponents last season, but so far this year the Indians have had an advantage with the gloves.

Kaylee Cook, a sophomore from A.L. Brown, was a struggling pitcher last year. Primarily an outfielder this year, she’s batting a team-best .383. Another former Wonder,  freshman Allie Baker, is batting .360 and gets on base a lot. Veterans Leah Huggins (.356) and Delane Smith (.318) are still hitting, and newcomers Jordan Dean (four homers) and Carlee Brawley (.311, 19 runs)  have added energy to the lineup. Catcher Monica Taylor is batting .294 and has made only one error. Second baseman Taylor Martin (West Rowan) is playing through a turf toe injury and is second on the team with 16 runs.

Brandi Parks (12-3) was sharp in the circle for the Bears in the first game, struck out five and  allowed only four hits. Leonhardt’s double put the Indians in a 2-0 hole. Catawba got its only run in the sixth when Brawley led off with a hit and was able to score after two L-R errors. Baker had two hits.

But the second game was all Catawba. The Indians scored four times in the first inning, putting some pressure on the L-R defense and taking advantage of walks and errors.

The Bears made six errors in the game, and the Indians got two hits each from Huggins and Dean. Dean smacked her fourth homer, a solo shot, in the third inning to make it 5-0. Smith, Taylor, Taylor Martin and Beth Ann Martin also had RBIs.

Hunter (7-3) did the rest. She held the Bears to five hits and no earned runs. She struck out four and walked four on a sunny, windy day.

Next on the schedule for the Indians is a home doubleheader against Mars Hill on Saturday. They’ll try for that elusive sweep.

No one really knows exactly how South Rowan’s Andre McCain felt because no basketball coach in county history ever had to endure anything quite like it.

McCain’s first 47 games as a varsity head coach were losses, most of them lopsided. His 48th try, the finale of the 2016-17 season, brought a victory against East Rowan. McCain didn’t just get a monkey off his back when the South boys won, 64-60, he got Noah’s Ark off his back.

Through some dark days and