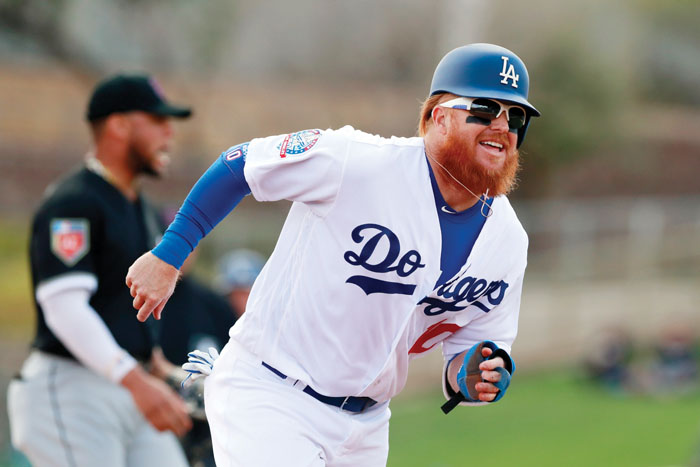 FILE - In this Friday, Feb. 23, 2018, file photo, Los Angeles Dodgers' Justin Turner runs to third from second after a throwing error by Chicago White Sox second baseman Yoan Moncada during the third inning of a baseball spring exhibition game, in Glendale, Ariz. Turner has a broken left wrist after being hit by a pitch during a spring training game, Monday, March 19, 2018. (AP Photo/Carlos Osorio, File)

Turner was hurt Monday when hit by a pitch from Oakland’s Kendall Graveman.

Turner arrived at the Dodgers spring training facility with a cast over his wrist Tuesday morning and was scheduled to see a hand specialist for an estimate of the time he could miss.

“We know that it’s not a surgery thing, it’s just essentially time,” Roberts said. “That’s the initial thought. That could change but that’s what I’ve heard.”

Turner hit .322 with 21 homers and 71 RBIs last year and was a first-time All-Star. He had 14 RBIs in the postseason, including seven against the Chicago Cubs in the NL Championship Series, when he was voted MVP.

The Dodgers appear poised to move Logan Forsythe from second base to third in Turner’s absence and have Enrique Hernandez and Chase Utley share time at second.

“It obviously makes a lot of sense to have Logan over there a lot more at third, and to kind of put together some guys at second base, and leave Chris (Taylor) in center field,” Roberts said.

LOS ANGELES (AP) — The Los Angeles Dodgers will pay tribute to one of baseball’s most celebrated home runs by introducing a “Kirk Gibson seat” at Dodger Stadium.

The seat will be added in the right field pavilion at the spot where Gibson’s game-ending homer landed in the 1988 World Series opener. The chair will be painted blue and feature Gibson’s signature, the team announced Monday.

Tickets will cost $300 for a package that includes a companion seat, two commemorative T-shirts and food and drink. The Dodgers will donate $200 from each purchase to the Kirk Gibson Foundation to raise money and awareness for Parkinson’s research — Gibson announced in 2015 that he has Parkinson’s.

The 60-year-old former player and major league manager is set to throw out the first pitch at the Dodgers’ season opener on March 29, when the team recognizes the 30th anniversary of the 1988 championship team.

Seat 1, Row D in section 302 will be the first seat at the stadium to be marked in connection with a historic event.