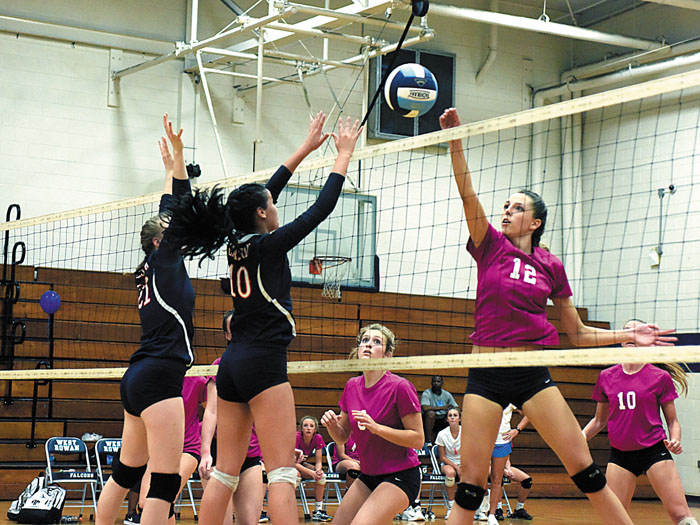 MOUNT ULLA — West Rowan’s 6-foot senior Braelyn Faust has always been tall, so there was some peer pressure to play basketball.

“I went to one basketball workout, seventh grade, and I just hated it,” Faust said.

Rowan County didn’t have middle school volleyball when Faust was growing up, so she wasn’t introduced to the sport until relatively late in life when she was about to start her freshman year at West.

“I went to one of the High Rock Volleyball camps and worked with (Carson coach) Kelan Rogers,” Faust said. “I realized volleyball was different. It was a sport I could love, and I knew that from the very first day.”

Loving it and being good at it were two different things, but Faust kept working and she was a solid player by her all-county junior year. She was a true standout as a senior, adding All-North Piedmont Conference honors to another all-county season.

On Monday, Faust signed with Lenoir-Rhyne and coach David Markland. Markland has been around forever, and the Bears are one of the consistently good programs in the Division II South Atlantic Conference.

West grad Lela Moore, who finished her career as a setter at D-III Hollins in 2015, was the most recent Falcon to play college volleyball. West will have two this year. Madi Myers will sign with William Peace University on Friday.

“It’s exciting to have girls sign,” West coach Jan Dowling said. “It’s always great to get those wins, but in the big picture, it’s about girls getting a chance to play at the college level and getting some money to help them get an education.”

“We weren’t any good at all my sophomore year,” Faust said. “So for us to do what we’ve done in a short time has been crazy. That’s what I’m proudest of — the improvement that we’ve made as a program. And West is going to be very good again next year.”

It wasn’t smooth sailing for Faust in her early years.

“I made mistakes, and I’d really get down on myself whenever I made one,” Faust said. “But all the workouts we do and all the weightlifting made me stronger and built my confidence. Adding confidence, getting tougher with the mental side of things, has been the biggest change in me over the years.”

Dowling agreed with that assessment.

“There’s never been any doubt about her work ethic,” Dowling said. “She’s gotten more mature and more confident. To see her go from being really unsure of herself to being someone we could all count on, someone who could just man the court in really big games, that’s been wonderful to watch.”

Faust made an official visit to Lenoir-Rhyne back in the fall and gave the Bears a verbal commitment shortly after that trip to Hickory.

“I was really comfortable with the girls when I stayed up there, and I enjoyed going to church with the team,”  said Faust, who plans to study exercise science. “I really like the campus. It’s going to nice being away from home, but not too far from home.”

Volleyball didn’t stop for Faust with the high school season. Through the winter months, she’s been practicing and playing in tournaments with the Mark Medich-coached IC Stars 18U team based in Statesville. A lot of her teammates are from North Iredell, including Ashley Hawkins, the outside hitter who was a two-time NPC Player of the Year and state-championship MVP. Faust and Hawkins plan to be roommates at Lenoir-Rhyne.

When Dowling coached at South Rowan, she had several players move on to Lenoir-Rhyne to play for Markland, including Kayla Morrow who earned All-SAC recognition with the Bears.

Faust will need to get quicker and stronger, but her ceiling is high and she should have plenty of college success. She’ll be a middle or a right side hitter for the Bears.

“She’s 6 feet without shoes and she can jump,” Dowling said. “She’s a strong-willed girl who’s going to keep getting better.”