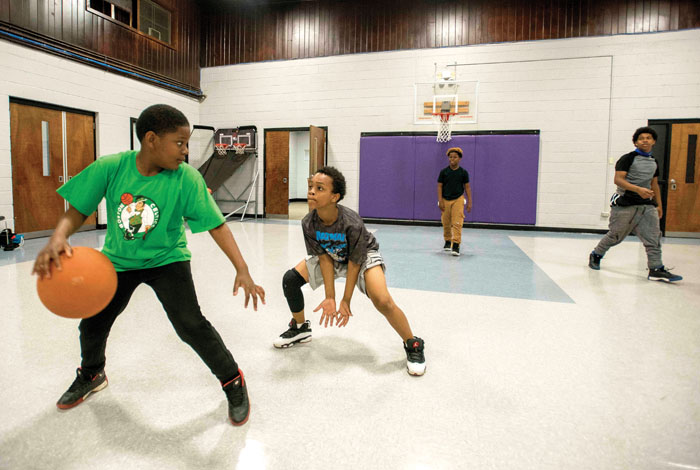 SALISBURY — Salisbury Parks and Recreation Director Nick Aceves has been dreaming of opening a teen center since he was hired in 2015.

“I’d been noticing that we contracted a lot of stuff out prior to me coming here, and I started to say, talking to staff, ‘How can we get back in the game?’” Aceves said. “And this was one idea I had.”

The teen center, which is in Miller Recreation Center on West Bank Street, had its grand opening March 3 and opened to the public March 5.

Now, after two and a half weeks of being open, Clowney said it has had another 20 to 40 sign up.

“We’re excited,” Aceves said. “You just never know, and we’ve had a lot of kids sign up.”

“We already run out of membership cards,” Clark said.

The membership cards are free when teens sign up for the program and give them access to city buses for free. The cards are required for entry into the teen center.

“These cards also teach responsibility for the kids, too, that they need these cards to get in,” Clark said. “So that encourages the responsibility of taking care of the card, keeping up with it, bringing it back when they come in.”

Clark — who is in charge of Hall Gym, across from the teen center — said teens usually go to Hall Gym to hang out after they get out of school.

“And now they come over there, hang out for a little bit, and then — whoosh — they flock over here. And they’re so excited,” Clark said.

Aceves said the teen center is making other people excited, too.

“All these wonderful programs are coming in and saying, ‘We want to do this for free,’” Aceves said. “And we can’t say enough about what everyone’s been trying to pitch in with.”

Aceves said he is hoping that with the help of local organizations and nonprofit groups, the center will be able to facilitate classes, college trips and mentorship programs.

“What we’re able to do here now is obviously offer the mentoring program for kids that we as a staff can offer but that can be supplemented by other groups. Like Gemstones (Academy and COMPASS) or Happy Roots or whomever it is can come in and just add to what we already do,” Aceves said.

Aceves said Livingstone College sororities and fraternities will be partnering with the center on Friday nights.

“They’ll wear their shirts, their matching shirts, and they’ll just hang out with the kids to say, ‘Hey, you know, I’m in college’ and kind of mentor the kids along with the staff mentoring,” Aceves said.

He said members of the Salisbury Police Department and Fire Department will be stopping by regularly to hang out with teens.

“You know, come in, drop in, play a game of pool. Play a video game with a kid. Get to know the kids; let the kids get to know you,” Aceves said.

Aceves said programming will continue to grow and develop as time goes on.

“And as we move forward, we’re also going to ask the kids. ‘This is what we’re offering now. Here’s what we’re hoping to offer. What else do you think is out there that you want to try?’ Because we’re willing to try anything within the means we can afford to do,” Aceves said.

Clark and Clowney said the center runs on a Saturday schedule — noon to 8 p.m. — on school holidays and over summer break.

Teenagers can get registration forms for the program at the teen center’s front desk.