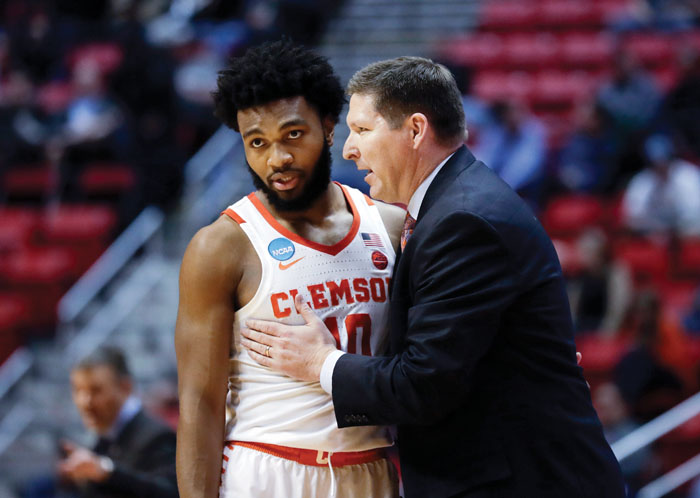 CLEMSON, S.C. (AP) — The formula for Clemson’s run to the Sweet 16 is simple — when the Tigers hit shots, they’re difficult to beat.

Clemson (25-9) has made plenty of baskets its past two NCAA Tournament games to advance to its first Sweet 16 in 21 years. The Tigers will try and shoot their way into the Elite Eight when they take on No. 1 seed Kansas (29-7) in the Midwest Regional in Omaha, Nebraska, on Friday.

Don’t count the fifth-seeded Tigers out, either, if they play like they did in defeating New Mexico State (79-68) and fourth-seeded Southeastern Conference champion Auburn (84-53).

Clemson hit better than 50 percent of its attempts (62-of-120) last weekend. Senior guard Gabe DeVoe went 18 of 33 in those games, earning the nickname “Bobby Buckets” on social media for his output.

“I started hunting shots,” said DeVoe, perhaps better known until now as the “mini-me” version of Tigers defensive tackle Christian Wilkins for their similar beards and hairstyles. “It’s a zone you get into.”

Clemson’s been in the zone this season for quite some time.

Brownell had made the NCAAs his first season in 2010-11, then missed the tournament the next six seasons.

Before this season, he took the team overseas for an exhibition tour to Spain. The Tigers were at their Barcelona hotel in August when a fatal terror attack took place just outside when a van drove into pedestrians, killing 14 people and wounding at least 130 others.

No one in Clemson’s party was hurt. Browell believes it brought the players closer, something essential during their run to the school’s fourth-ever trip to the round of 16.

“When we got back from Spain, I had no doubt about this team’s spirit,” the coach said.

Of course it doesn’t hurt when Clemson is making shots.

The Tigers, picked for 13th in the Atlantic Coast Conference last October, had long been known a defensive powerhouse that could not keep up with most teams on offense. But Clemson has shot .457 percent this season (seventh best in the ACC and tops in Brownell’s eight seasons) while maintaining its defensive tenacity (third in ACC in points allowed).

The Tigers used their shooting to build a big halftime lead on North Carolina , then called on defense to make several big second-half stops when the Tar Heels tied the game for an 82-78 victory Jan. 30 to snap a 10-game losing streak to the last year’s national champions.

A season ago, Clemson was snake bit in the ACC as it was 2-8 in games decided by five points or less. This year’s team has turned things around to go 4-2 in close games.

Brownell said it took time to get his transfer starters from 2016-17 — guards Shelton Mitchell from Vanderbilt and Marcquise Reed of Robert Morris, and forward Elijah Thomas of Texas A&M — up to speed on playing the defense the coach demanded. The Tigers have bought into that this season.

“There are some years when your team, when the pieces just fit,” Brownell said.

College basketball is still buzzing about the beat down Clemson put on Auburn.

“We have to stay locked on defense,” DeVoe said. “I think better days are coming for Clemson basketball. And this is the first step.”

DeVoe remembers looking up at the scoreboard during one timeout and shaking his head at the blowout margin. He was even happier when told his team had gotten 15 straight stops against Auburn to turn the expected close game into a runaway.

Especially Friday for the Tigers first-ever meeting with Kansas, the Big 12 Conference champion and one of the remaining NCAA Tournament favorites. Still, no one at Clemson is conceding a thing to the high-powered Jayhawks.

Duke’s Allen making the most of his final NCAA…