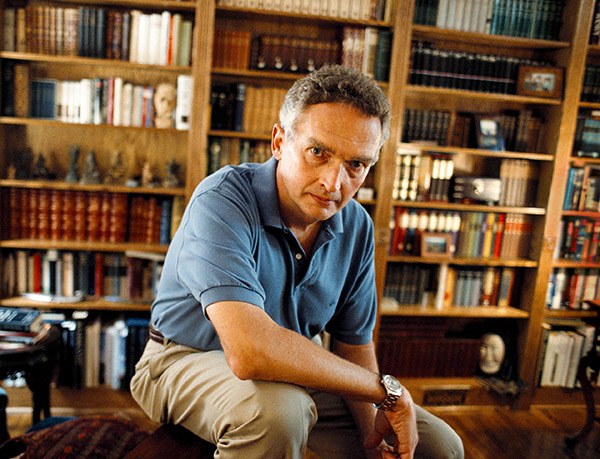 Ralph Peters in his library in 2002. Washington Post photo by Tracy A. Woodward

By Paul Farhi
The Washington Post
Commentator and author Ralph Peters isn’t just closing the door on his career at Fox News Channel. He’s slamming it right off the hinges.

In a blistering goodbye email, Peters, a retired Army lieutenant colonel who commented on military affairs, called Fox “a mere propaganda machine for a destructive and ethically ruinous administration.” He described President Donald Trump as being “terrified” of Russian President Vladimir Putin.

“Four decades ago, I took an oath as a newly commissioned officer,” wrote Peters on Tuesday to his Fox colleagues, in an email first obtained by BuzzFeed News. “That oath did not expire when I took off my uniform. Today, I feel that Fox is assaulting our constitutional order and rule of law, while fostering corrosive and unjustified paranoia among viewers. Over my decade with Fox, I long was proud of the association. Now I am ashamed.”

He added: “When prime-time hosts – who have never served our country in any capacity – dismiss facts and empirical reality to launch profoundly dishonest attacks on the FBI, the Justice Department, the courts, the intelligence community (in which I served) and, not least, a model public servant and genuine war hero such as Robert Mueller – all the while scaremongering with lurid warnings of ‘deep-state’ machinations – I cannot be part of the same organization, even at a remove. To me, Fox News is now wittingly harming our system of government for profit.”

In an interview, Peters, 65, who lives in Warrenton, Virginia, said he never intended his email to become public and that he wasn’t trying to “grandstand” about his differences with the network, which he joined as a contributor in 2008. But he offered no apologies.

Instead, he said he wrote the email because Fox’s hosts – whom he did not single out by name – are “hurting the country.”

“It’s not complicated,” he said. “It’s not. It may sound corny to say I took an oath as an officer, but it’s true. I just feel for their selfish reasons, they’re doing damage to the country.”

In a statement in reply to Peters, Fox said, “Ralph Peters is entitled to his opinion despite the fact that he’s choosing to use it as a weapon in order to gain attention. We are extremely proud of our top-rated prime-time hosts and all of our opinion programing.”

To which Peters replied: “If I’m seeking attention why the (expletive) did I just quit Fox and the chance to speak to millions every day?”

Peters appeared frequently on both Fox News and its sister channel, Fox Business Network, over the past decade to discuss military topics and foreign affairs, including U.S.-Russia relations. He estimates that he averaged more than 200 appearances a year during the past five years.

During that time, he said, Fox’s producers never instructed him what to say. But in the past year, as questions arose about potential collusion between the Trump campaign and Russia, he said Fox wouldn’t let him engage on the topic, in which he holds considerable expertise as a former intelligence officer.

In recent months, Peters said he “edged” toward criticizing Trump on the air, but “as a matter of courtesy,” he didn’t let loose. “If you’re taking the king’s shilling, you do the king’s service,” he said. “You don’t embarrass the host on the air. I just couldn’t do it anymore.”

By contrast, Peters was frequently blunt in his comments about the Obama administration’s relations with Russia. In 2014, he said that President Barack Obama got “date raped” in his efforts to negotiate with Putin. On Bill O’Reilly’s program in late 2015, Peters called Obama’s Syria strategy “inept, ineffective and cowardly,” and described Obama as a “terrified little man in a great big job he can’t do.”

He apparently went too far a few weeks later on Fox Business Network when he called Obama “a total pussy” for his administration’s counterterrorism policies, earning a two-week suspension. Peters apologized for his language but not the criticism, saying “my choice of words was incorrect, but my sentiment, I think, is shared by many.”

Peters retired from the Army as a lieutenant colonel in 1998 after serving for 22 years. He had enlisted after graduating from Penn State in 1976. He served in infantry and military intelligence units in Southeast and Central Asia, Russia, Burma and Pakistan. He was also assigned to the Pentagon and the executive office of the president.

Peters has written 32 fiction and nonfiction books and hundreds of columns for such newspapers as the New York Post, USA Today and the Wall Street Journal. He uses the pen name Owen Parry for his spy thrillers.