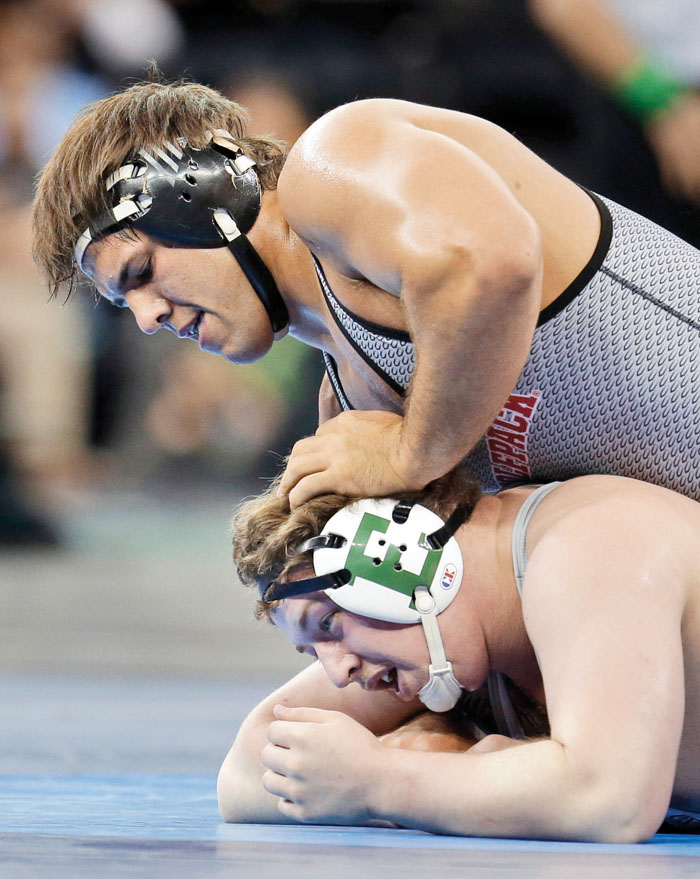 FILE - In this March 17, 2016, file photo, North Carolina State's Nick Gwiazdowski, top, controls Eastern Michigan's Gage Hutchison in a 285-pound match during the NCAA Division I wrestling championship in New York. Eastern Michigan plans to drop softball, men's swimming and diving, women's tennis and wrestling at the end of the spring season due to budget cutbacks. The Ypsilanti school announced the planned athletic cuts Tuesday, March 20, 2018, saying the reduction in sports to 17 from 21 will save about $2.4 million. (AP Photo/Seth Wenig, File)

YPSILANTI, Mich. (AP) — Eastern Michigan University plan to drop softball, men’s swimming and diving, women’s tennis and wrestling at the end of the spring season because of budget cutbacks.

The school announced the decision Tuesday , saying the reduction in sports to 17 from 21 will save about $2.4 million.

“We are very saddened by having to make this move, which is necessary as we continue to align the university budget with enrollment and state funding trends,” Eastern Michigan President James Smith said. “This aligns us with our Mid-American Conference peers in total number of sports, and is part of our ongoing effort to realign resources to ensure that we continue to invest in high-demand high-quality academic programs and world-class facilities.”

The cuts will involve 58 male student-athletes and 25 female student-athletes, according to the school. The university will honor athletic scholarships for students who choose to stay and complete their degrees instead of transferring to compete in their sports at other schools.

“I feel like I’m disappointing them, pulling that experience away and that opportunity away,” athletic director Scott Wetherbee said at a news conference after he informed the affected students of the decision earlier in the day. “They came here to compete and get a degree and now they won’t be able to do that.”

Wetherbee was hired to run the athletic department less than nine months ago.

“I feel handcuffed,” he said. “I walked into a terrible situation.”

Three members of the swim and dive team said they received emails late Monday night, asking them to report for a mandatory meeting early Tuesday morning. As word spread around campus, they found out student-athletes on the softball, women’s tennis and wrestling teams received the same message.

“Nobody on the team slept last night,” said Maxwell Wilkinson, a redshirt junior on the Eagles’ swim team. “We were all shook up at the meeting. We feel betrayed by the university we signed on with to give it our all.

Hoping to save the swim and dive program, an online fundraiser with the goal of raising $90,000 and an online petition were created.

“We’re hoping to get people behind us to take one last swing at it,” Wilkinson said.