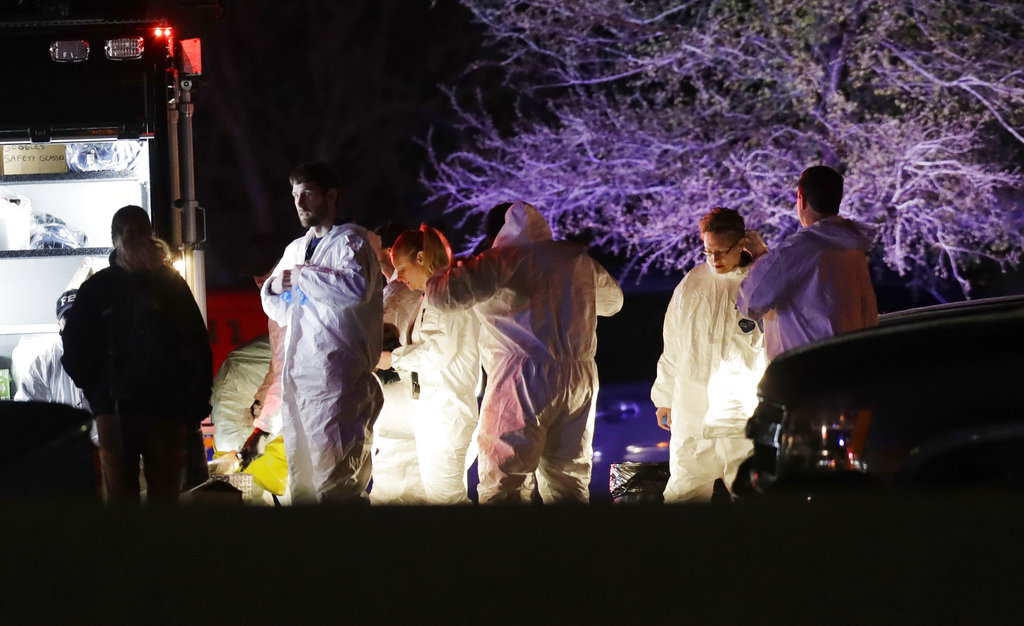 Members of law enforcement stage near the area where a suspect in a series of bombing attacks in Austin blew himself up as authorities closed in, early Wednesday in Round Rock, Texas. (AP Photo/Eric Gay)

ROUND ROCK, Texas – The suspected serial bomber who terrorized Austin with a slew of exploding packages died early Wednesday after detonating another explosive device in his vehicle as police closed in on him, authorities said.

Austin police and the FBI tracked the 24-year-old male to a hotel parking lot in Round Rock, about 18 miles north of Austin, where they found him inside his vehicle, Interim Austin Police Chief Brian Manley said. Officers wanted to wait for tactical units to arrive before engaging the suspect, but he started to drive away.

The man stopped on the side of the Interstate 35 frontage road, Manley said. As Austin SWAT officers approached, the suspect detonated a bomb, knocking one of the officers backward and injuring him, Manley said.

A SWAT officer then fired at the suspect, who died inside the vehicle, Manley said. It was unclear whether he died from the explosion or from gunfire. Manley said the suspect sustained “significant” injuries from the blast.

Authorities have not yet provided the man’s name.

In announcing the suspect’s death early Wednesday, authorities warned that he may have left additional explosives behind and urged residents of Austin and its surrounding communities to remain vigilant.

“We are concerned that there may be other packages that are still out there,” said Christopher Combs, special agent in charge of the FBI’s San Antonio office.

News of the suspect’s death came after investigators spent days struggling to explain the bombs that detonated in Central Texas since March 2, a string of blasts that killed two people in Austin and injured four others.

Manley said police believe that this suspect is responsible for all five explosions – four in Austin and one at a FedEx facility in Shertz, Texas – and that police are now investigating whether he had any accomplices.

“That’s the one thing we don’t have right now, is a motive behind this,” Manley said. “We do not understand what motivated him to do what he did, and that will also be part of the continuing investigation as we try to learn more about him.”

Manley said the information leading police to the suspect came together over the past 24 to 36 hours through surveillance videos and witnesses, who provided tips about his vehicle.

Nathan Brisbois, who works the overnight shift at an IHOP just down the road from where the suspect was killed, said he didn’t hear any gunshots or explosions. But, he said, there was a sudden flurry of police activity – “tons and tons of agency vehicles, marked and unmarked, going down the interstate,” he said. “A SWAT team sat on our parking lot for a while. Other than flashing lights and sirens, we knew nothing.”

Early Tuesday, the investigation expanded after a package exploded at a FedEx facility in Schertz. The company also said a second package sent by the same person was found and handed over to the FBI, along with “extensive evidence” about those packages as well as the person who shipped them.

Police called the attacker a “serial bomber” who had been showing increasing sophistication and skill as the bombings have continued. This blast in Schertz was the latest sign that whoever was responsible for the explosions was capable of shifting tactics, an unusual trait for such an attacker.

The bomber “is not stupid. He’s being diversified in his methods and attacks, and may have done this before somewhere,” Malcolm Brady, a retired explosives investigator at the Bureau of Alcohol, Tobacco, Firearms and Explosives, said Tuesday. But each new device – and delivery method – offered new potential leads, such as business records, video or other evidence.

The bombings began with three packages placed at people’s homes in east Austin, then shifted to a tripwire-enabled device left along a residential street in another part of the city. After that came the pair of packages sent through FedEx – including one that exploded on a conveyor belt – as whoever was responsible apparently turned instead to a delivery company.

While the explosion at the FedEx center sent investigators to a city about 65 miles from Austin, Michael Hansen, the Schertz police chief, said investigators were “confident that neither this facility nor any location in the Schertz area was the target.”

Instead, the focus remained on Austin, where the previous four explosions had occurred between March 2 and March 18.

The first explosion killed Anthony Stephan House, 39, when it detonated at his home on March 2. Ten days later, another explosion killed Draylen Mason, a college-bound 17-year-old known for his passion for music. That blast also injured Mason’s mother.

These explosions prompted speculation that the victims were targeted because of their family connections: House’s stepfather, is friends with Mason’s grandfather Norman, and both are prominent fixtures at a local black church.

Hours after Mason was killed – while police were still responding to that blast – another explosion seriously injured Esperanza Herrera, a 75-year-old woman visiting her elderly mother’s house. Investigators believed that package was addressed to someone else and detonated while Herrera was carrying it, according to people familiar with the case.

On Sunday, two more men – both in their early 20s – were injured just hours after police made a plea for the bomber to come forward to speak to authorities. That bomb, rather than being left at someone’s home, was on the side of the road, rigged with a tripwire and anchored to a for-sale sign. When it detonated in an affluent part of southwest Austin, the two men were taken to the hospital with serious injuries.

The package that exploded in Schertz early Tuesday was heading to Austin, police said. Authorities also believed it was sent from a FedEx location in Sunset Valley, an enclave city in Austin.

“The FBI believes that the package that detonated in Schertz may have originated from here,” said Sunset Valley Police Lt. Rich Andreucci.

Police and experts have pointed to the change in tactics as suggesting the proficiency of whoever is responsible.

“That bomb was very different from the other three,” Brian Manley, the interim Austin police chief, told the City Council. “The first three appeared to be targeting a specific residence, resident address. And whether they were targeting the person at that address or not, we know they were placed on a specific doorstep at a specific home.”

The device Sunday night, meanwhile, was seemingly intended to detonate at random, ratcheting up the fear in a city already unnerved by the package explosions. Police said Tuesday morning that they had received more than 1,200 calls about suspicious packages since March 12, the day two bombs detonated; one-third of the calls came in between Monday morning and Tuesday morning.

President Trump cheered the arrest of the suspect in a tweet early Wednesday, saying, “AUSTIN BOMBING SUSPECT IS DEAD. Great job by law enforcement and all concerned!”

He had been criticized for saying little on the Austin situation as it unfolded, though the president said Tuesday that the government was working “hand in hand” with local authorities to “get to the bottom” of the bombings in Austin and find those responsible.

“We have to find this very sick person or people,” he said.