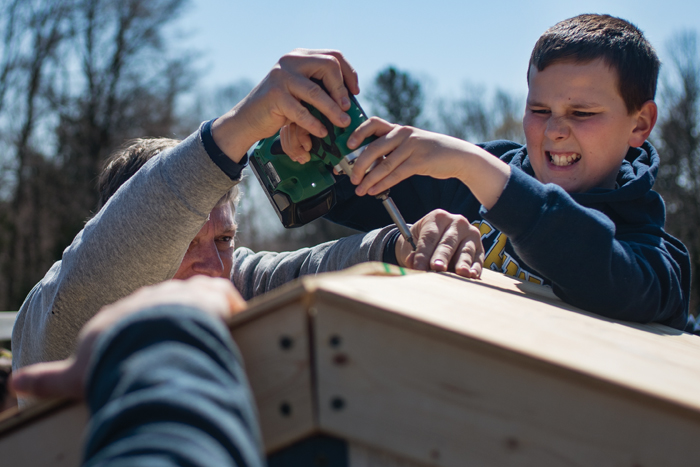 SALISBURY — Sacred Heart Catholic School students are all about nurturing this spring — from egg to feather.

Erin Brinkley’s third-grade class has spent the past several weeks incubating a clutch of eggs. On Thursday, they got the chance to build their future chicks a home.

For the past several years, third-graders have been incubating and hatching chicks as part of their study of the life cycle. The class candles the eggs to determine which are viable, incubates them and watches as the chicks break their way out of the shell.

Usually, Brinkley said, the class donates chicks to nearby farms or families once they’ve hatched. But this year, they’re trying something different.

“This year, I thought, why couldn’t we keep some of them?” she said.

Sacred Heart will keep five of the nearly dozen chicks that made it to hatch day. And in preparation, Brinkley reached out to other grades to get them involved. Students split into 28 teams across all grades and were charged with designing a chicken coop that could comfortably house the birds.

“I just really had a vision for building a coop. And having chickens knows no age limit. I just thought this was a really good opportunity to get everyone involved,” Brinkley said.

It was a true, hands-on engineering and math activity that required students to account for practicality, as well as the square footage needed for each bird. After the designs were done, two community members with coop-building experience judged the drawing and picked one.

On Thursday, it was time to build. Money for materials was donated by Sacred Heart’s Parent Teacher Organization. Each of the 28 student groups was given 30 minutes to put their mark on the coop.

“Everyone feels like they have ownership in it,” Brinkley said.

The coop, along with a chicken run, sits between the school’s playground and its sensory garden so that children can watch the chickens while they play.

While the chickens will provide an educational benefit to the whole school, Brinkley said the third grade will be in charge of managing it. Twelve of the 16 eggs had hatched by the end of the school day Monday.

“It’s been a really exciting day,” she said.

She hasn’t decided if she’ll add more chickens to the flock next year, but Brinkley said she was glad to offer students this opportunity.

“The kids were just so excited to be a part of it,” she said.

Students show off their skills and earn their trade