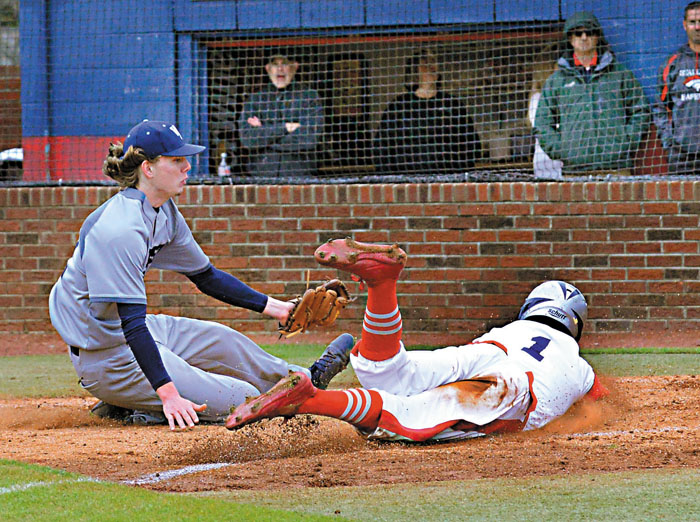 GRANITE QUARRY — Doing the little things paid off for East Rowan’s baseball team on Tuesday. So did one big swing.

It came in the bottom of the first inning at Staton Field, where the Mustangs opened their North Piedmont Conference season with a 6-1 victory against West Rowan.

“It was a big swing,” said winning pitcher Hayden Setzer. “Hitting that triple helped settle me down.”

Let’s set the scene. West (2-5, 0-1) had taken a 1-0 lead against Setzer in the top of the first, but could have had more. Losing pitcher Olen Stamper doubled home Logan Sproul with the game’s first run before Setzer worked out of a bases-load-with-nobody-out jam.

“That first inning killed us,” said West coach Seth Graham. “Our first four batters got on base and we had them loaded with no outs. Then we had strikeout, strikeout, groundout. That changed the momentum of the game.”

Everything changed when Setzer stepped into the batter’s box against Stamper, a senior right-hander. He connected on a 3-2 curveball and drove it into the right-center field gap for a stand-up triple.

“I wasn’t really expecting a curveball,” he said, after going 3-for-4 and scoring twice. “I just wanted to foul it off and get something else. I wound up burning the outfielder.”

East coach Brian Hightower felt Setzer’s fingerprints were all over the victory.

“He was the key,” the coach said. “We could have been down 3-0 and he got out of that mess. Then he comes back and hits the triple. He got a breaking ball and he got over his front hip, but he’s so doggone strong he hit it in the gap anyway.”

East tied the score when Will Brown hoisted a sac fly — the first of three sacrifice plays executed by the Mustangs.

“It was just so big when Setz got us out of that jam and then he steps up and slaps a triple,” said Brown. “I came up and was looking middle-away. I knew I had to score that run. And Stamper, he knows me from the Legion team. He wasn’t going to throw me anything inside. I waited for an outside pitch and let my hands do the work.”

East’s immediate response proved significant. “You always want to answer — and we answered quickly,” said Hightower. “It kept our confidence up.”

After Stamper retired East, 1-2-3, in the second, the hosts cracked the game open with four runs in the last of the third. Bryson Wagner blooped a leadoff single to right, took second on a sac bunt by Jax Fitz and scored when Brown barreled a one-out, RBI-double to right-center. Another run scored on an infield error, a third on Wayne Mize’s sac fly and the fourth on a wild pitch.

“I think Olen actually pitched pretty good,” Graham said after Stamper allowed four earned runs and induced seven groundouts in five innings. “He had one bad inning — and that wasn’t all on him. I thought he stayed calm under pressure and got outs for us.”

By the time this meeting adjourned, no one looked better than Setzer. He yielded four hits in six innings, struck out six and retired 12 of the last 13 batters he faced — including the final 11. He needed 91 pitches to earn his first win of the season and lowered his ERA to 2.12.

“He didn’t try to blow it past anybody,” said Scruggs. “He just made good pitches to good locations and let the defense work.”

NOTES: West outfielder Mykal Berger (.300, team-best 6 RBIs) wasn’t in the starting lineup, but pinch hit against East reliever Jake Davis in the top of the seventh. … Stamper and freshman catcher J.T. Fecteau had doubles for the Falcons. … West brings a three-game losing streak into today’s scheduled home game against North Rowan. The Falcons host NPC foe South Iredell on Friday night. … East is 5-1 since dropping its season-opener at Lake Norman. The Mustangs host Carson on Friday night and South Rowan on Saturday afternoon.