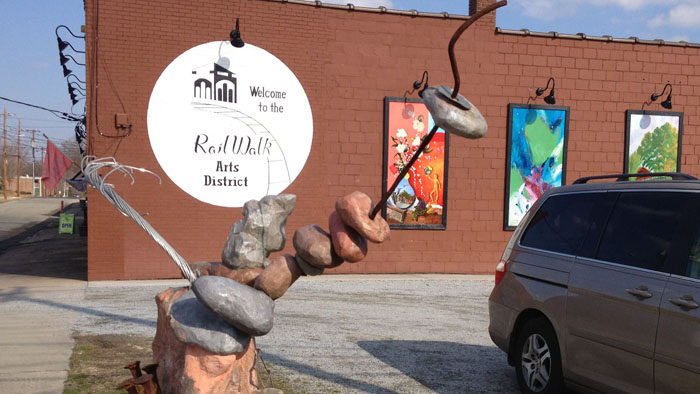 A Rowan County-backed streetscape project will be in partnership with the city of Salisbury is meant to increase access to several businesses in the Riverwalk area. The businesses -- Morgan Ridge Railwalk Brewery, Lee Street theatre, Salisbury Emporium and Railwalk Artist Galleries -- comprise what county officials call the "Railwalk area." Streetscaping will improve lighting and aesthetics to enhance safety and atmosphere and drive sales.

SALISBURY  — The Rowan County Board of Commissioners on Monday approved a loan of as much as $350,000 to the county’s Tourism Development Authority.

The money, pulled from the county’s fund balance, will be used to renovate the 1920s-era Fisher Thompson Hardware storage structure on Kerr Street. The project also will improve access to businesses in the surrounding area. The money is to be reimbursed over a five-year period.

The streetscape part of the proposed project will be in partnership with the city of Salisbury, and it is meant to increase access to several businesses in the area. The businesses — Morgan Ridge Railwalk Brewery, Lee Street theatre, Salisbury Emporium and Railwalk Artist Galleries — comprise what Meacham calls the “Railwalk area.”

Streetscaping will improve lighting and aesthetics to enhance safety and atmosphere and drive sales.

The exact cost for the project is out to bid, with numbers expected to be in Tuesday.

James Meacham, chief executive officer of the authority, presented the request to the board.

He said the loan is meant to expedite renovation of the structure. The building, said Meacham, was not simply demolished for two reasons: the weight of the building and because demolition would require a minimum one-year moratorium.

The Tourism Development Authority plans to have the structure completed in four to five months, Meacham said.

“When we began this project, we knew it would raise a lot of opinions,” said Meacham. ” … This is a longer road, and it is a more costly road, to say the least.”

The building is in disrepair and would be potentially hazardous if used as an events space.

“The only thing that’s historic about it is it was built 100 years ago,” said Commissioner Craig Pierce, a proponent of the project. “… We’ve done everything that we thought we could to maintain the integrity of this building’s structure and … make sure our citizens are safe. The only way we’re able to do that is to bring it up to current building code.”

The Fisher Thompson Hardware storage structure was purchased by the Salisbury Tourism Development Authority in early 2017 for the purpose of creating a outdoor venue for concerts, markets, performances and other activities.

Changes in the Rowan County occupancy tax law were made in June that year, effectively eliminating the Salisbury authority.

The change instituted a 6 percent tax at hotels, motels and other lodging businesses countywide. Previously, the countywide rate was 3 percent, and Salisbury businesses paid 6 percent.

The money was allotted to what was then two branches of the Salisbury-Rowan Convention and Visitors Bureau, one tourism authority for the city and one for the county.

The tax changes effectively merged the two branches, a decision officials said would maximize tourism efforts across the county.

The commissioners approved the loan provided the money came from the county’s fund balance rather than the economic development fund, as originally proposed.

“That economic development money is limited, and as projects are beginning to flow our way … tying up $300,000 on that is something that I don’t want to get into,” said commissioners Chairman Greg Edds. “… We don’t know what phone call we’ll get from our EDC partners tomorrow. We could use that money for jobs and capital investment.”

“I would prefer taking money out of the fund (balance) rather than economic development money,” said Green. “I would rather tie that to actual jobs than this.”

Pierce said he was behind the board’s decision to switch the funding source as long as the project received funding.

“Basically, this is a bridge loan, is all it is. We’re going to take it out of here and get it back, so to me as long as they’ve got the money that’s all I’m after,” he said. “… Not to sound trivial, but at the end of the day this is not a lot of money, not for what we’re trying to do here.”