Students show off their skills and earn their trade 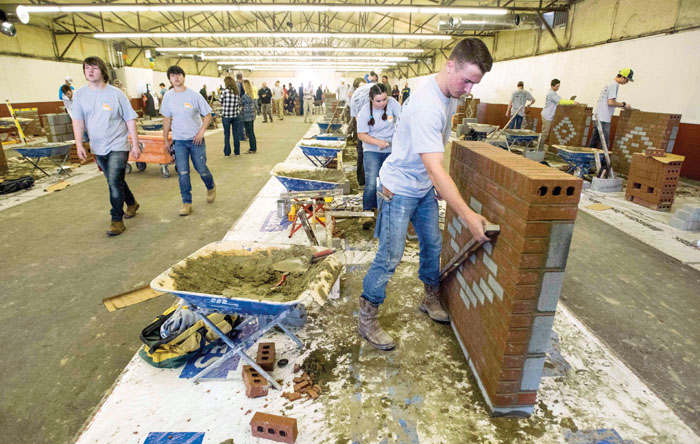 JON C. LAKEY / SALISBURY POST West Rowan's Jesse Baker puts the finishing touches on his project as time grows short on his timed competition. High school woodworking and masonry students from several school systems gathered at the Rowan County Fairgrounds on Saturday for a competitions that tested and showcased their trade skills they learned in class. Students from Rowan-Salisbury schools were well represented at the competition as well as neighboring Kannapolis City Schools but a couple of woodworking students traveled 8 hours with their teacher from Ocracoke Island to take part. Saturday, March 17, 2018, in Salisbury, N.C.

SALISBURY — The Rowan County Fairgrounds were a beehive of activity Saturday as students raced the clock to lay brick, cut board and to build something beautiful.

“Hopefully contests like these will make these skills a little more glamorous,” she said.

Trade skills like carpentry, masonry and agriculture are often overlooked, especially at the high school level. Students who choose a trade track rarely have the opportunity to step into the spotlight and shine.

“We’re drawing attention to skilled trades, which is a good thing,” Mills said.

Roughly 80 students signed up to compete in Saturday’s event, with entrants from 15 schools and eight different school districts. Some came from as far away as Ocracoke Island, Mills said.

For students, it was not only a chance to show off their skills, but also an opportunity to practice working under pressure — which they’ll be asked to do in future competitions, or on the job field.

“It really puts them in the mindset of being on the job and having to produce a product,” Nick Golden, a carpentry teacher at South Rowan High School, said.

Students had three hours to complete an assigned project in their field. Masonry students slapped bricks with mortar, laid them carefully and tapped them into place as they worked to build low, decorative walls. At the other end of the aluminum-sided building, carpentry students worked in pairs to build either a bench or a little library, depending on their skill level.

On both ends of the building, judges walked the aisles, observing both the quality of the project and the students’ work methods.

“It lets them know where they’re at as a carpenter,” Golden said of the observation.

But the competition also provided students with another opportunity: a future.

“A lot of these kids are wanting to go into this industry,” West Rowan High masonry teacher Rodnie Harrington said.

Judges at Saturday’s competition were local contractors and industry professionals — which meant that for some of the older, more advanced students, the day also functioned as a chance to impress potential future employers.

According to Harrington, the masonry industry is “booming,” but employers are having a difficult time finding skilled workers. Saturday was a rare chance for them to scout potential employees.

“This is a good opportunity to make that connection,” he said.

Saturday’s competition also celebrated other career skills, like public speaking. Initially, Mills said, she planned to have competitions in agriculture, communications and business and marketing, but didn’t get enough entries. Several students, however, signed up to give a short, prompt-based speech.

Skylar Jahnke, a 10th grader at West Rowan High School, takes all the opportunities she can to practice her public speaking.

“I feel it really helps my confidence and my life skills,” she said.

Jahnke is a member of Future Business Leaders of America, and said Saturday was good practice, as she had a state competition later in the week.

“I feel great, pretty good,” she said after delivering her speech.

While students competed for a cash prize, there were also other benefits. The more than $5,000 raised from entry fees will go towards helping cover student expenses as they attend state and national competitions. Usually, Mills said, the CTE department isn’t allowed to give funds to individual students — but by donating the money raised to schools, they can relieve some of the burden. Normally, students have to fundraise or cover the expenses out of pocket.

“So this will offset that,” Mills said.

The day’s carpentry projects will be sent to school art departments to be cleaned, primed and painted — they’ll then be donated to local elementary schools.

“We want to increase the number of students we have every year. We’d love to grow out of the fairgrounds and hold it somewhere else,” she said.

The competition was sponsored by local contractors, businesses, non-profits and industries including Gates Construction, Griffin Masonry and Rowan Partners for Education.