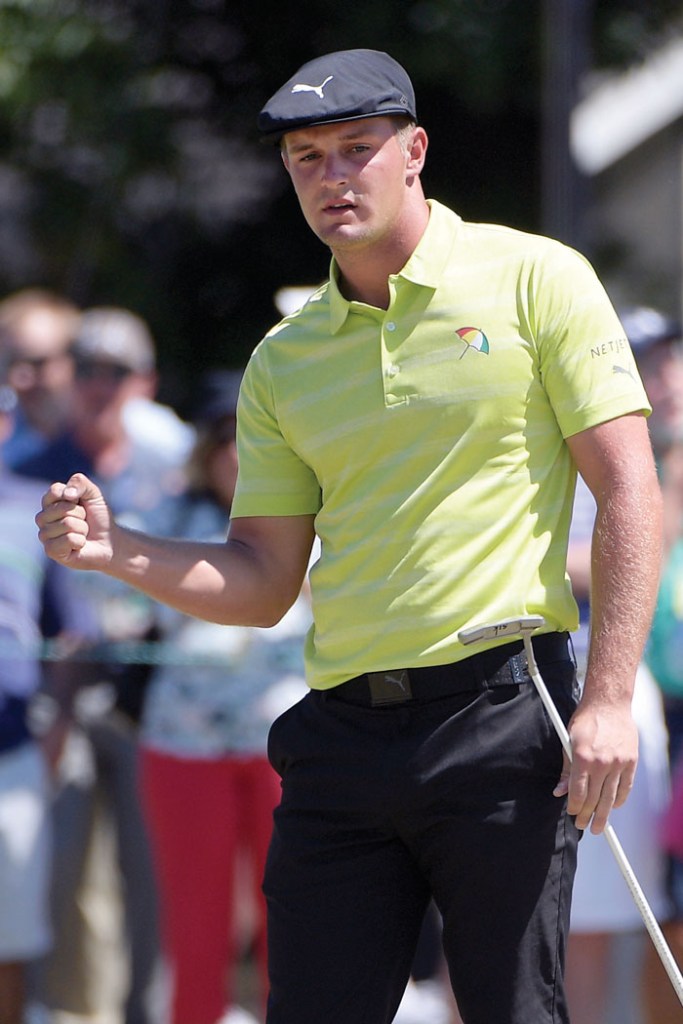 Bryson DeChambeau pumps his fist after making a putt for birdie on the second green during the third round of the Arnold Palmer Invitational golf tournament Saturday, March 17, 2018, in Orlando, Fla. (AP Photo/Phelan M. Ebenhack)

ORLANDO, Fla. (AP) — Henrik Stenson gets his third chance in four years to finally win the Arnold Palmer Invitational, and the final hour Saturday reminded him it won’t be easy.

Part of that feeling came from three putts he narrowly missed — two for birdie, one for eagle — that could have given him some separation going into the final round at Bay Hill. Stenson settled for a 1-under 71 that gave him a one-shot lead over Bryson DeChambeau, who missed a few chances of his own in a round of 72.

And part of that feeling was seeing some of the names suddenly in the mix.

Four-time major champion Rory McIlroy made an eagle and birdied two of his last three holes, dropping a wedge into 3 feet on the 18th for a 67 to finish two shots behind. Former U.S. Open champion Justin Rose outplayed Tiger Woods before another raucous gallery, posting a 67 that left him three behind.

“I think that I didn’t really miss a shot the last six holes,” said Stenson, who was at 12-under 204. “The only frustrating part was not really getting the score with me on that fine play coming in. … I felt like I left one or two out there coming in, and I definitely could have wrapped up a two- or three-shot lead for tomorrow, which would have been a nice cushion. But I guess it didn’t happen and we’ve just got to go out and play solid tomorrow to try and have a chance to win it.”

Woods isn’t entirely out of it just yet, either.

He hit another shot that had the fans buzzing, switching from a wedge to hit back to the fairway to a 5-iron he took over the lip, over the trees and over the water to set up a birdie on the par-5 16th. Woods had a 69 and was five shots behind.

“I’m within reach if I shoot a really, really low round tomorrow,” Woods said.

Of his record eight victories at Bay Hill, Woods has led six times and was tied for the lead another time. His lone comeback also was from five shots behind in 2009, when he rallied to beat Sean O’Hair with a 67 in the final round. Woods has played in the final group at all eight of his Bay Hill victories.

This time, he has nine players in front of him, and they have some pedigree.

It starts with Stenson, who has reason to believe he is overdue at the Arnold Palmer Invitational. He had a one-shot lead with four holes to play in 2015 when he had consecutive three-putts — one for bogey, another for par — and Matt Every beat him with an 18-foot birdie on the last hole. A year later, Stenson was tied for the lead on the back nine until dropping two shots and tying for third.

“I’ve been up in the mix and let’s hope for a different outcome tomorrow,” Stenson said.

DeChambeau, who won the John Deere Classic a year ago for his first PGA Tour title, hung with Stenson throughout the warm afternoon on greens that were getting crispy and fast. He took his only lead when Stenson fanned a 3-wood off the tee at No. 8 and had to lay up short of the water in making bogey. He fell no more than two shots behind, closing the margin when Stenson bogeyed the 17th.

He, too, missed an opportunity to pull away with Stenson. And with his lack of experience, DeChambeau couldn’t help but look over his shoulder at McIlroy and Rose, or even Rickie Fowler four shots behind, and yes, Woods.

“Unfortunately, just didn’t go my way today,” he said. “But tomorrow there’s one more day, one back, got a lot of guys behind me that are lurking.”

He paused to smile before mentioning players who were lurking.

“I’ve got to go deep tomorrow,” he added.

McIlroy has gone 26 tournaments since his last victory at the Tour Championship in 2016 to win the FedEx Cup. He has a chance to change that, which is all he wanted.

“I started the day just outside the top 10 and wanted to at least give myself a chance going into tomorrow, so it was a great day out there,” he said. “I can’t really ask for much more. I’ll hopefully be within two or three of the lead, and I can make a run at it.”

Fowler was tied for the lead briefly until a long three-putt on the par-3 14th and a messy finish. He bogeyed the 17th from a front bunker, and then from the 18th fairway, he pulled his approach into a buried lie in the bunker, left it in the sand and took double bogey for a 70.

Woods avoided falling behind early when he holed a 40-foot birdie putt on No. 3, hit a beautiful bump into a slope below the green on the par-5 fourth hole to set up birdie and holed a 15-foot birdie putt on the par-5 sixth. He also made a few mistakes that slowed his momentum and caught some tough lies in the bunkers, but still managed to have his ninth straight round at par or better. That’s his longest such stretch in five years.

“I played well, scored well, it was a good day all around,” Woods said. “Can’t complain about anything I did today. I really hit the ball solidly, I controlled it, and I hit a lot of beautiful putts. Some went in, some didn’t.”