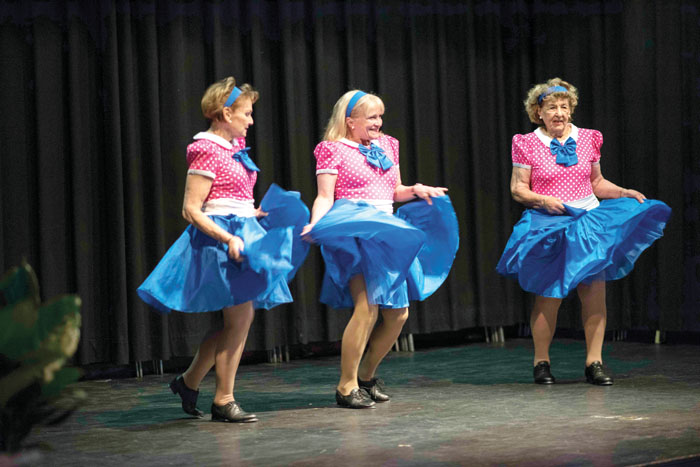 SALISBURY — There was song. There was dance. There was a wooden kaleidoscope on a pedestal.

The 35th annual Silver Arts Extravaganza event — held Friday at 10 a.m. at the Salisbury Civic Center — brought more than 70 Rowan County residents over the age of 50 together to celebrate life and their own unique talents.

“They are still so full of passion and excitement for so many different things,” said Silver Arts Assistant Coordinator Savannah Daniel.

The Silver Arts participants competed in four main categories — performing arts, visual arts, literary arts and heritage arts. But within those categories were many more subcategories, with woodworking, knitting, acrylic paint, photography and quilting being just a few.

“For a lot of them, they do art as a hobby,” Daniel said. “Some take classes. But everyone has to be 50 or older to participate.”

Participants’ artwork was judged Thursday by some combination of eight judges. Daniel said they tried to get judges who had experience with the category they were judging.

There were also winners for arts like food, housewares, live plants and sewing.

Phyllis Loflin-Kluttz, who has been the Silver Arts coordinator for the last 18 years, said before the performing arts portion of the event that the judges had “a ball” looking over the contestants’ work.

“They really fought hard about it. They loved all the work,” Loflin-Kluttz said.

The event featured more than 60 artists and approximately 200 pieces of art, not including the literary and performing artists and art.

The performing arts portion of the show, which began around 12:30 p.m., featured seven local acts in singing, instrumental and dance performance.

The first-place winners of the performing arts portion were: Tim Smith, the “Spoon Man,” in first place; Hazel Trexler-Campbell, Debbie Hoffman and Jane Smith-Steinberg — “The Donnettes” — in second place; and George Clyburn, the “Man of Motown,” in third place.

Teresa “Peanut” Lambert & The Girls opened up the performing arts portion with a half-hour performance of dance, song and jokes.

Loflin-Kluttz said that, if participants want to know what judges said about their submitted pieces, they may come to Ellis Park — 3541 Old Mocksville Road in Salisbury — to receive a copy of the feedback.

For more information about the Silver Arts — or Senior Games — program, email Loflin-Kluttz at phyllis.kluttz@rowancountync.gov.