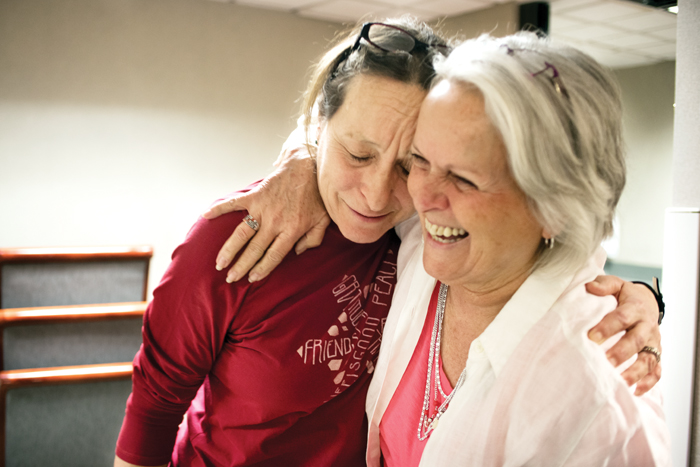 Rhonda Harrison, right, hugs Heather Clement at their retirement party at Novant Health Rowan Medical Center on March 14, 2018. Harrison has worked as a Nurse at Novant Health for 38 years and Clement has worked there for 36 years. (Photo by Rebecca Benson)

SALISBURY — Imagine what nurses Heather Clement and Rhonda Harrison have seen in almost four decades of working in a hospital emergency room.

The lives they saved. The lives they couldn’t save. The interactions with paramedics. The conversations with families. The traumatic injuries. The minor cuts. The broken bones. The wraps for sprains. The heart attacks and the upset stomachs.

“The healing that has occurred through the two of you is amazing,” said James Cook, chaplain for Novant Health Rowan Medical Center.

Cook was speaking Wednesday during a boisterous hospital retirement party for Clement and Harrison that was full of laughs, cutting up, embraces and tears.

Each woman leaves behind 38 years in nursing, virtually all of them in the Emergency Department. It’s already official for Harrison, who hung up her nursing scrubs March 3. Clement only has a few more shifts in the emergency room before she is done.

Their colleagues, former colleagues, doctors, hospital staff and family kept dropping in to toast and roast the pair Wednesday. The party included cards, flowers, money, T-shirts signed by all their coworkers and, for Clement at least, a helicopter ride.

The short helicopter trip in Novant Health Rowan’s new whirlybird was supposed to be their surprise gift, but when Med Flight Director Russell Wise announced what was happening, Harrison reacted strongly — in an oh-no-I’m-not kind of way.

Her husband, Bobby Harrison, had an explanation for the crowd.

On their first date years ago, Bobby took Rhonda to McCabe’s restaurant in Kannapolis. When they readied to walk upstairs to their table, Rhonda grabbed his arm and confessed her strong fear of heights.

“She wouldn’t go on a second-floor balcony,” Bobby Harrison said. “She’s not going in any helicopter.”

But Clement gathered her courage and was soon up in the air on a 15-minute flight with pilot Chris Bruening, Nursing friend Sandy Lipscomb went with her.

Kenny Goforth, a part-time paramedic, said he will miss his interactions with Clement and Harrison. They were instructive, caring and easygoing, “and you know how tense things can get sometimes,” Goforth said.

“They are very resilient,” said April Gaither, manager of the Emergency Department. “… My two most senior nurses are leaving at the same time. Our department is the best it’s ever been because of ladies like these.”

Leah Overcash, an emergency room nurse for 17 years, said Clement was “just like a ball of fire.” She always got her job done, and if things were stressful, Clement made you laugh, Overcash said.

“We will miss them both so much,” she added.

Gaither credits Harrison for helping her survive orientation many years ago. “Rhonda saved me, if I am honest,” Gaither said.

When Gaither lost her 7-day-old son, Andrew, it was Harrison who came to her house, sat on the couch and asked what she needed.

Harrison copied every picture Gaither had of young Andrew and made a CD she could hold onto for the rest of her life.

“That’s the kind of person she is,” Gaither said.

The nurses tended to look to Clement for guidance when they were in a code situation. “For every code I was in,” Gaither said, “she was the one who got me through.”

Lisa Anguzza, who had worked with Harrison and Clement for many years, now lives in Sevierville, Tennessee. She manned a night shift Tuesday, so she could make the drive from Sevierville to Salisbury on Wednesday to attend the women’s retirement party.

Anguzza had the room laughing with reminisces about how she once jumped on top of the department’s buffet table and sang “Jeremiah was a bullfrog” at the top of her lungs.

There will be more about frogs later.

“We had some fun times,” Anguzza said. “I don’t think the hospital will ever be the same.”

Clement’s sister, Sabra Mills, told how Heather had two children before and while completing nurses training, then two more babies soon after she became a registered nurse.

“She went through a lot to become a nurse,” Mills said, and through it all, Heather never lost her passion for the profession.

Lois McCorkle remembered the time she and Harrison were the only nurses in the Rowan Memorial Hospital emergency room when they received word there had been a big train derailment near Barber Junction. They worked frantically, going over all the protocols for triage.

Thankfully, the freight trains involved meant there were not a lot of injuries, but the retired McCorkle recalls “there were many nights when I cried my way home.”

“There were some happy times, too,” she said.

The good times included the days before Bobby and Rhonda were married when he would bring doughnuts for the emergency room.

Rhonda Harrison worked virtually all of her 38 years on the night shift, except for 18 months during the hospital’s accreditation process.

Clement said the toughest part for her in retirement will be not seeing all her coworkers. Otherwise, there will be plenty to do. She and husband Willie have four children, six grandchildren, six dogs and eight horses.

In retirement, Harrison is looking after the welfare of her mother, and “I’m going to be at home and enjoy my home,” she said.

She and Bobby plan to take a lot of day trips to interesting places.

“My husband says we can’t make it to Hawaii and back in one day,” Rhonda reported, acting as though she were skeptical.

There was one other gift Wednesday, and it was presented by Harrison to Clement. Clement opened up her gift bag to find a stuffed frog.

The nurses never knew where that frog might show up, and it became a long-lasting game, which ended when the Emergency Department changed locations in the hospital.

Harrison was the last person to find it.